A little bit ago I was introduced to Jack Chick's tracts and philosophy. As Wikipedia puts it, Mr. Chick opposes abortion, Harry Potter, Roman Catholicism and Judiasm. Clearly, we are all equally evil.

Chick Publications has a fantastic little tract that follows the life of poor Helen, our Catholic friend. It details how she is led astray by all the lies of the Church, especially through its teachings on the Sacraments. A couple of my favorite pages follow:

Of course we don't believe the priest uses magic nor that he is powerful enough to call down God, nor that we are sacrificing Christ again. And then when you get to the whole sunburst issue, well Christ is the great light that has shone on the people in darkness. And I don't know about the whole "...or else!" thing either. I've seen a lot of people not give reverence to the Eucharist but they are all still alive and members of the Church (no lighting striking them or excommunication). I however, do genuflect and bow down to my God, present in the Blessed Sacrament because I believe He's God. I genuinely want to honor Him in such a way.

Now the Venus thing is so laughable I'm not even going to comment beyond that. But I will point out that Christ received His flesh from Mary. They must have looked an awful lot alike because the Holy Spirit doesn't have DNA to add to the mix. And though I have never read the text referenced above, I feel confident in saying that's what the author is referring to. And of course, the Catholic Church does not teach that Mary's blood is what saves us. But good job, Chick, taking that quote out of context! 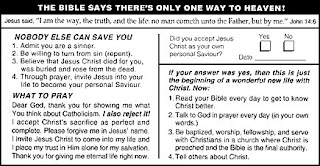 Now this brings me great assurance. While the Holy Sacraments established by God to give us His Grace cannot help us on our road to sanctification, if we check the Yes box we will be saved!

Oh, my dear people at Chick Publications, while it is very kind of you to want to save us Catholics from Hell, I believe I will keep my Catholic faith and you can keep your Yes box.