My baby brother is getting married in November and my sister-in-law and I threw the bride to be a bridal shower. 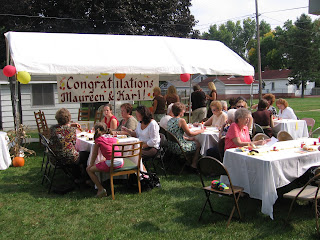 Her wedding colors are ivory and Bordeaux so we went with a bottles of Bordeaux wine as prizes and a fall theme. We served chocolates, mini pumpkin pies, grapes, cheese, crackers, apples, cake and apple cider punch. It was a lot of fun, except for the gnats who came out and were biting like crazy. 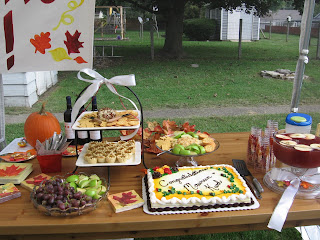 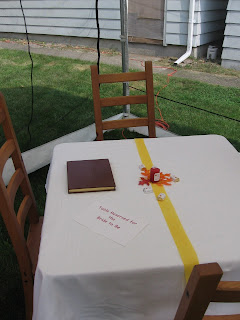 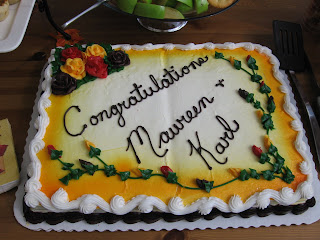 This was a game we played that I called "Karl: The Man, The Myth, The Legend." His answers follow and if you know my brother at all you'll appreciate his humor. Enjoy!

1. What bone did Karl break when he was little and how did he do it? Answer: I broke a bone in the upper extremity of my left arm when I was six years old. I broke it while preparing to make a controlled slide across our gravel driveway on my BMX bike. My arm actually broke before I started the slide, while coming down the hill at top speed when I carelessly fell off my bike.

2. Who are Karl’s top 3 favorite musicians? Answer: This is a hard question even for me. In no particular order: Paul Simon, Counting Crows (or Adam Duritz), and Chris Thile (Nickel Creek)

3. What is a nickname that Karl had as a boy? Answer(s): Chipmunk cheeks, Fondulac Drive, and Doug's favorite - Karla,

4. What musical was Karl the lead in his senior year of High School? Answer: Guys 'n Dolls.

5. If Karl could have a super power what would it be? Answer: Invincibility

6. Which super-hero is Karl’s favorite? Answer: It is a tie between Batman and Superman. I will except both as correct answers.

7. Who does Karl consider himself most like: Frodo, Gandolf, Legolas or Aragorm? Answers: Gandolf the Grey (tall, wise, beard)

8. What book was Karl’s favorite as a boy: The Fat Cat, One Fish Two Fish, Goodnight Moon or The Pokey Little Puppy? Answer: The Fat Cat.

11. Karl graduated from Bradley University with what kind of degree? Answer: Bachelor's of Science in Accounting (which is not a science)

12. When Karl was little, his favorite thing to play with Bonnie was what? Answer: Stand on Bonnie's Butt Time!

13. Which song does Karl identify most with: Dean Martin’s “Little Ole Wine Drinker Me”, Johnny Cash’s “Ring of Fire”, Nickel Creek’s “Spit on a Stranger” or Paul Simon’s “Me & Julio Down by the Schoolyard”? Answer: All good songs, but I have to say "Me & Julio Down By the School Yard." I'm on my way, I'm taking my time, and I don't know where I'm going.

16. Which of these places has Karl never been to: San Diego, New York City, Nashville, San Francisco or Dallas? Answer: I've been to all of these places, but spent the least amount of time in Dallas.

17. His Senior year of High School Karl ‘s classmates voted him all of the following EXCEPT: Most Likely to Succeed, Homecoming King, Prom King, Best Personality. Answer: Most likely to succeed - thanks for pointing that out.

18. Where did Karl propose to Maureen? Answer: Jubilee State Park on a bridge in the woods with a mountain unicyclist.

19. Where did Karl take Maureen on their first date? Answer: I don't know - we probably went to Avanti's. Whatever Maureen says is the correct answer.

21. Instead of cake, what does Karl get from Mom on his birthday? Answer: pumpkin pie