This weekend, 4 years after I graduated from college I went to my first Homecoming football game ever at Eureka College. It was GREAT seeing old friends and classmates, a lot of whom I still think of very fondly but haven't seen since graduation. A couple of things were odd - hanging out on the TKE lawn again, but this time I was holding a baby (though everyone else was holding beer); seeing SO many of my former classmates pushing strollers or holding babies; seeing people whose faces I remembered but whose names I could not recall. It was a lot of fun, and I'm very glad I went.
Today, I got out my photo albums from college. Here's two pictures in honor of two of the people I was most excited to see. 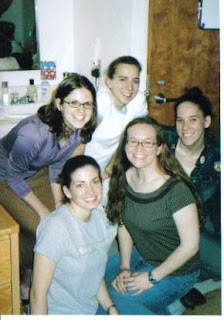 This one was taken in my dorm room at my "I'm going to San Francisco for the Summer" party. 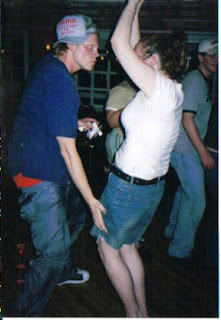 This one was taken at the Senior Boat Party. I swear, even though it looks like he's touching me, he never did. Jacob is a perfect gentleman, which you maybe couldn't tell by his red boxers and his hat that reads, "Wisconsin: Land of Cowshit and Beer Farts."
- October 26, 2008

Email ThisBlogThis!Share to TwitterShare to FacebookShare to Pinterest
Labels: Eureka College is the best, friends, I'm getting old