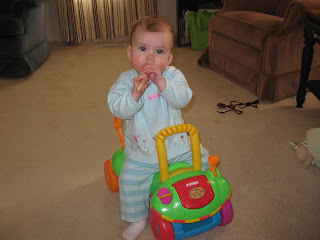 It is amazing the change that has happened around our house in the last week or two. L is smiling and laughing all the time. Her day time fussiness has been greatly reduced and overall she is just a much, much happier baby.


What has changed, you may wonder. Well, I've been playing with her more, getting down on the floor and acting silly, reading to her, building things and making funny noises and faces. I'm able to do this more because I'm not dead tired, just sitting on the couch waiting for nap times and Travis coming home from work. 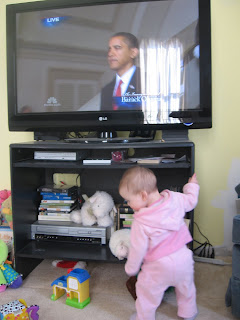 Yes, we have returned to the cry it out method, which we tried when she was 5 months old and hated. But it finally came to a point where we decided that I could feel like a jerk for making her cry for awhile or I could be a jerk brought on by major sleep deprivation and an even bigger case of burnout.


I might misunderstand attachment parenting, but their approach of don't let them cry - get them - soothe them - hold them was not working for me. Attachment parenting believes in peaceful parenting, but I decided that me shouting in my daughter's face to "shut up" and putting her on the floor, walking away while pounding the walls and screaming was far from peaceful. I was not the mother I wanted to be and I was tired of my demanding daughter. 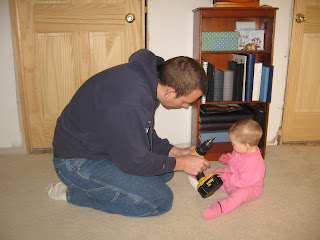 After talking with Travis, I decided that I could no longer feel guilty because of comments made by a. p.ing parents. We decided that we would put L down for the night when she was asleep, either nursed down by me or rocked to sleep by Travis. Then, if I knew she had nursed well, we agreed that we wouldn't get her until at least 5 hours had past. We knew that in 5 hours she would not be hungry, wet, cold, or anything else except wanting her mom who had nothing left to give.
Of course we're open to adjust the 5 hour rule, but usually we don't have to. And the best thing that has come out of all this is that if L cries for more than 5-10 minutes we know it's because she really needs us. Otherwise, she'll fuss for a little bit and then go back to sleep.
- January 30, 2009