please be warned, this is all about my vanity 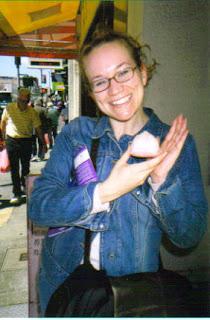 Here are two pictures. The one was taken on a return visit to San Francisco the summer after I graduated from college. (Hi Suitey, if you're reading!) The second one was taken a week before I got married during a bachelorette weekend. (Yay for Hedda and Em!)


What these two pictures have in common is that when they were taken I thought I was fat, but now that I am actually fat I see that I was really a hottie.
Even with the huge zit on my cheek in the SF pic. And my lack of a waist in the second picture. Still, smokin'.

I'm writing this because, as I've already mentioned, I'm fat. I gained 50lbs with the pregnancy, lost 30 in the 2 months after L's birth and then slowly gained 10 back over the next 6 months. I felt a little better about myself when I learned over Christmas break that tired people can't lose weight. When you are seriously sleep deprived (which I have been for 4 months now) your body doesn't lose and in fact, to make up for your lack of energy, tells itself it's hungry. So I've been eating frequently, because I honestly did feel hungry, but it was really just my exhaustion.

But let me tell you something, even with a good reason like that, and knowledge that you were working out on a regular basis and eating somewhat sensibly, it's still depressing being fat. And having a closet full of clothing that doesn't look good on you any more because it's 2 sizes too small. And having a very limited amount of clothing that is not size 10 or M like it used to be.
Oh to be a size 10 again!!!! 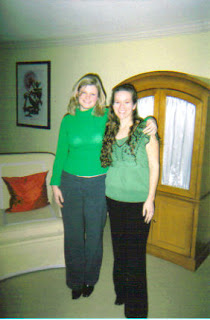 Email ThisBlogThis!Share to TwitterShare to FacebookShare to Pinterest
Labels: being fat, me