Last weekend I headed up a Valentine's fundraiser dinner at my parish. It benefited EC's Newman Center's spring break mission trip. To be honest, I was a little worried about it because I was soooooo spoiled working with the students I had at WIU's Newman Center. There were 4 girls who were awesome in the kitchen and so I never had to dictate - they knew what to do and when to do it. But the EC students did not disappoint. Friday night we decorated and did some prep - they were great. Saturday they showed up on time and were so efficient we finished all our prep work with 40 minutes to spare.
The dinner was salad, chicken Parmesan, garlic bread, seasoned green beans and a baked potato with a chocolate dessert buffet at the end of the evening. Everything was plated and served to the couples who came. A FOCUS missionary gave a talk on love, Fr. led the couples as they renewed their vows and we then had them dance their first dance as a renewly married couple. After that was the Anniversary Dance; the "winning" couple was given a box of chocolates. 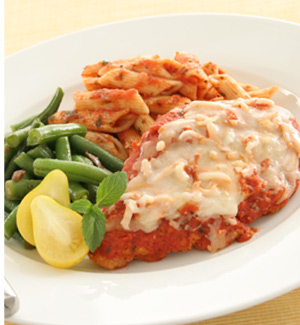 Everyone had a great time, every couple laughed and smiled all night long. Even the students loved it! After Mass the next day almost every couple who had attended came up to me to tell me how much they liked it. Hopefully more will come next year and we can really grow the event.
Some of my fave things:
- all the decorations either belonged to the church or my mom so they were FREE
- the evening grossed almost $900!
- one of the husbands told me he didn't know there was going to be dancing until he and his wife were leaving the house, but he said we did a good job with the songs. ;)
- in the kitchen we had a really great conversation about the Church and its teachings
- all the food turned out perfectly
- a elderly single woman came alone and during the dancing I asked one of the college students to ask her to dance. He just took off his apron, washed his hands and went right up to her. I was so impressed with him.
- The husband who won the Anniversary Dance told me that he really enjoyed the night, though it probably didn't hurt that he won the chocolates. He then said, "Those are the best things to win, when all you have to do is endure."
- February 11, 2009

Email ThisBlogThis!Share to TwitterShare to FacebookShare to Pinterest
Labels: Eureka College is the best, good to be Catholic, me, Newman ministry