Saturday was The Behold Conference, A Conference of the Dignity and Vocation of Women at St. Mary's Parish in Metamora.

It was amazing!
Especially when one takes in consideration the fact that we began planning it at the end of January.  And that it was in the small town of Metamora, in an old school.  And that it was the first year we did it.  And that there was no working budget.

90 women came, mostly from Central Illinois, with some coming from as far north as Chicagoland and one as far south as Champaign.

About 1/3 were under 35, several were college and high school students.

There were 3 babies present, which delighted me! 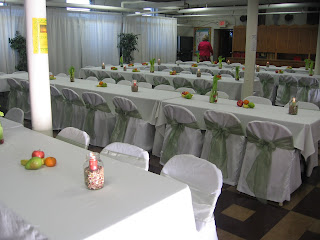 Attendance-wise, it was great.  Our Diocese already has several women's conferences, but those attending are all older than my mom.  We wanted to create a conference for all women, but with a special emphasis on younger women, especially wives and moms.  We wanted to have speakers who would communicate to the hearts of discerning women, new moms, older moms, and grandmoms.  We hoped there would be generations of women present (and there were!).  We wanted to speak to women - affirm their femininity, celebrate their motherhood (spiritual or physical), rejoice in their beauty, and prepare them to go back out to fight the good fight.  That was my prayer as we prepared for the conference, and it is my hope that my prayers were answered.

Our speakers were phenominal, and it was so beautiful to see how the balanced each other so perfectly.  Mother Assumpta, co-foundress and mother superior of the Dominican Sisters of Mary, Mother of the Eucharist, and Teresa Tomeo, Catholic talk show host and media consultant, spoke openly and honestly, with much wisdom and humor. 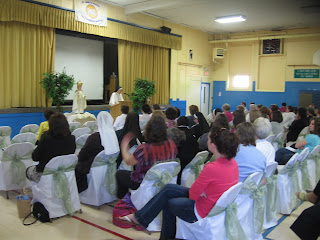 Mother, who has a soft voice and a sweet Southern accent,  told touching stories, cute stories, and was sweet and gentle.  Yet she made some profound statements and told some challenging truths.

Some highlights from her:
- God must have a special love for us to allow us to live at a time when women are being attacked.
- To be a saint we must be formed in the womb of Mary.
- Mary had to will the will of the Father for the death of her Son.
- The world is not a place to prove herself, but a dwelling place of people.  In a woman's way, we must redeem the world as a dwelling place.

Teresa Tomeo was bold, vibrant and funny.  I loved hearing her speak about the media.  It was jaw-dropping and eye-opening.  I need to listen to this woman's radio show every day.  Seriously.

Some highlights from her:
- If you are bearing fruit you have to be pruned.
- Make your misery your ministry.
- Women are so powerful, and we need to reclaim our culture.
- Discouragement is the greatest tool of the devil.

Some comments on the rest of the day:
- It was wonderful having the Sacraments.  Over lunch, people waited in line for more than an hour to go to confession.  Mass and adoration were also parts of the day.
-  The food was amazing.  My mom baked a variety of breads, muffins and rolls for breakfast, which also featured hard-boiled eggs, fruit, milk, juice and coffee.  Lunch was catered by Michael's Italian Feast and was fantastic.  (The owners are devout Catholics, and it happens to be my favorite sauce - so I'm biased.)
- The decorations were thought of by a woman on our planning committee.  They were simple, pretty, and unique.  The chair covers were donated (!) and made the biggest impact of all.
-  The little touches - like nice soap in the bathrooms, converting the library into a Mother's Room with rocking chairs, wet wipes and water, and having pretty napkins - were all notice and appreciated by the women attending.  When they commented on such things it kinda felt like they were saying, "This is the kind of thing I do for my family / friends all the time.  It never gets recognized or appreciated but it matters to me and makes my home more hospitable.  Thank you for doing it for me!"
- A friend told me that when she heard where the conference was going to be located she had pretty low expectations for the entire conference.  But from the moment she entered the school cafeteria she was amazed and completely blown away.  In the end, our rinky-dink conference ended up being pretty wonderful.
-  The pictures below are "before" pictures.  As in before we spent 6 hours decorating, stuffing goodie bags, organizing, setting up tables and hiding ugliness. 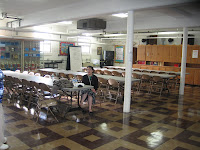 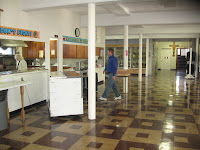 Lastly, I just want to say that I really appreciate all the women who supported me in this endevor.  I know that you didn't come to the conference for me, but for yourself, yet your belief that the conference would be worth $30, a whole Saturday and altering plans helped me believe the same thing.  (ha!)  I did it for you, with the firm belief that you are worth investing in, encouraging, building up and serving.  I sincerely hope that you left the day feeling honored, challenged, encouraged and delighted in.

Email ThisBlogThis!Share to TwitterShare to FacebookShare to Pinterest
Labels: good to be Catholic, me