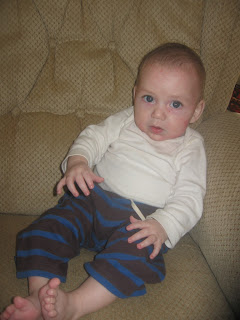 To celebrate his amazing little life I am sharing the summary I wrote for the Diocese's file on Sheen.  Please note, if anything is quoted it is taken from the medical records provided by OSF unless otherwise stated.  Oh and just so everyone's updated, the button has been removed, he did really well with his current thickness and was approved for spoon feeding at the cookie swallow, and the developmental therapist who saw him this morning thought he looked great and evaluated him at 5 months.  Not bad for someone who turned 6 months today!

James was my 4th pregnancy in 3 years. His conception was improbable and so Travis and I felt certain that God wanted this baby for a reason. My pregnancy was healthy with only moderate gestational diabetes which I kept under control through diet and exercise. He was a planned home birth, as my other two children had both been born at home and baby and I both were healthy. My labor with James was a relatively easy 8 hours and he had a strong, healthy heartbeat the entire time. However, fetal heart monitoring stopped while I was pushing, and it was probably during that time the true knot in his umbilical cord tightened. He was delivered at 1:48am on September 16, 2010 a stillborn.

Having no pulse, chest compressions and mouth to mouth were given while we waited for EMT's. He was baptised by his father and we named him James Fulton (for St. James the Greater and Archbishop Sheen). During transport to the hospital EMT's noted minimal electrical activity of the brain. An attempt to insert a line to the marrow of his shin and deliver epinephrine (in the hopes of restarting his heart) failed and left his right leg with a severe chemical burn. James arrived at the Emergency Department "pulseless, apneic, unresponsive." He was blue, "in PEA (pulseless electrical activity) on the monitor", and was "in cardiac arrest." At 2:46am, he was still "pulseless with a heart rate of 48 on the monitor".

After going 56 minutes without significant oxygen flow, per the recommendation of the on-call neonatalogist, the ED team tried for five more minutes to restart James' heart. At five minutes, just when they went to call time of death, his heart began to beat on its own.

Because of his "severe hypoxic-ischemic encephalopathy" and the multiple organ failure that was expected to result, James was cooled for three days in the NICU. It was expected that once James was warmed up he would only eat via feeding tube, breathe via ventilator, be blind, not be able to support, move, or control his own body, not be able to communicate or emote. Some thought his right leg would have to be partially or completely amputated because of the chemical burn. Many believed he would be a so-called vegetable for the rest of his life. Some did not even expect him to live to be a week old, which is why he was confirmed Linus by Msgr. Bliss on his birthday, once he was in the NICU.

Once he was rewarmed, EEGs and MRIs were done. The EEG (9/28/10) results: "suppression of the electrocerebral activity is an indication that there is a significant brain dysfunction." The MRI (9/24/10) results: "subtle signal changes... may represent ischemic change." James' brain was injured because of the lack of oxygen flow - he'd been practically dead for over an hour!

However, a second EEG (10/19/10) showed improvement and "risk of low threshold of seizures". During a follow up visit with the nurologist, we were told that James' further improvement since hospital discharge was "very impressive" and he will probably never have another seizure in his life. A follow up MRI (12/14/10) showed: "No encephalomalacic change is seen in the area of previous signal abnormality in the frontal parietal regions. No acute intracranial abnormality." James' brain had healed.

James is now 6 months old. He has rolled over, done mini push-ups during tummy time, grabs at toys and brings them to his mouth, and supports his own weight when held in a standing position. He laughs and smiles at people, especially his siblings, grandparents, and Travis and I. He talks and coos to us. He gets excited when he sees his bottle. His physical therapist assessed him (when he was 3.5 months old) and found that his average developmental age was about one month behind. This is not worrisome since all babies develop at different rates and James was not given a normal start, being mostly confined to the NICU crib for 7 weeks.

Of course, during James' entire life we have been asking a lot of saints for their prayers, and James was prayed over by many, many people. However, my family asked for the intercession of Archbishop Sheen in a very special way. When he was two days old a Holy Hour and Mass was held at the Cathedral; another Holy Hour was held at St. Mary's in Metamora; St. Luke's healing Masses always included James - and all of these holy times specifically called for Archbishop Sheen's prayers. Sheen's holy card was distributed and the intercessory prayer with James' special intentions were printed up and posted on Facebook, blogs and in emails. People were literally praying all over the world for James, all asking for Archbishop Sheen's intercession. (Germany, Ireland, Canada, Mexico, Peru, not to mention Texas to Alaska, California to New York City.)
- March 16, 2011