--- 1 ---
Mark Shea wrote an article at the National Catholic Register and used JF's story.  The combox went a little crazy and many people seemed to have missed the point that while it is quite impressive that JF's heart began to beat after 61 minutes, the potential miracle is that after 61 minutes he came back to life and is now fine.  Doctors thought he would die or at least be severely disabled.  Their thinking was based on what science and medicine tells us about how the human body works.  You don't get oxygen, you die.  Your organs shut down and don't work so machines have to do the work for you.  Or you die.

Upon the gentle nudging of my VirtuousPla.net editor, Stacy, I was going to go back to the combox and explain that.  And then I saw that long-time Newlywed reader, JoAnna had already done so.  So thank you, JoAnna.  I feel a little too weak right now to fight any emotional fights and I really appreciate you stepping in for me.


--- 3 ---
Here's something awesome:  a video from a Roman news agency.  The funny thing is that they get two things wrong.  #1 - they report that JF was pulseless for 61 seconds.  Seconds?!  Uh, no.  Try minutes!!!  #2 - they make it sound like the worst thing that would have happened was that JF could have been blind.  Um, blind would have been nothing compared to severe cerebral palsy, brain dead, vegetable, dead...  Trav said I should email them and correct them.  I said it's not my job to correct everyone.  If the Church sees fit to declare this a real miracle then I'm sure the record will be set straight then.  :) 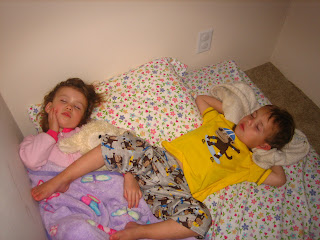 --- 5 ---
The weather is finally cool enough for slippers, a hot cup of tea, and fall decorations.  Love it! 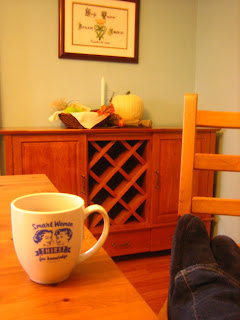 --- 6 ---
A recent trip to a local pumpkin patch.  In this area Ackerman Farm Pumpkin Patch is the way to go.  The pumpkins are nice and cheap.  The employees are kind and helpful.  And they have all kinds of farm animals for the kids to see.  Here's L and B petting a baby goat. 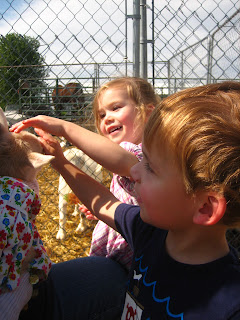 I love this picture of L.  Carmel apple sucker in mouth, she makes her way through the pumpkins, carrying the one special pumpkin she finally decided on. 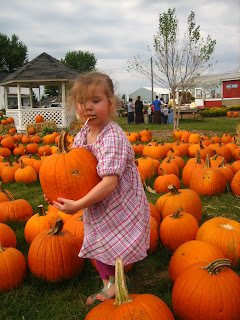 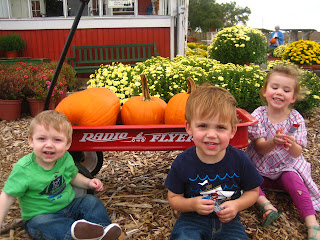 Thanks for reading, friends!  Have a great weekend!
For more Quick Takes, visit Conversion Diary!
- September 30, 2011