1 - So I've been listening to this song on repeat for about 3 weeks.  I hate the video, though.  The song definitely tells a story that happened in the 80's but everything is current except for the mix tape.  Seriously, do people younger than 25 even know what mix tapes are?  I don't think so.  So don't watch the dumb video, just listen to the song and appreciate all its references to songs we can all hopefully agree are great.

2 - I own this album, as in record. There's something about a record... but I can't listen to them anymore because my kids would break or scratch them, I am sure of it. I'm on Fire is probably my favorite song, closely followed by Working on the Highway. I think I have a strong association between my childhood and Bruce Springsteen and John Mellencamp songs. They always make me think of playing in my neighborhood, eating popsicles, and riding in the backseat of my parents grey Oldsmobile. It makes me happy. 3 - On Pinterest I saw the suggestion to take a picture of your daughter in your wedding dress so it can be displayed at her wedding. Of course the picture on Pinterest showed a little girl with styled hair and good lighting, probably sitting in a portrait studio. This is L at the end of the day, sitting on my bed. But it doesn't really matter. She looked beautiful in the dress and I was delighted when she told me she would wear it on her own wedding day. (I seriously love that dress so much that until I could no longer fit in it I would wear it around the house, talking on the phone, watching tv, whatever. Love it.) 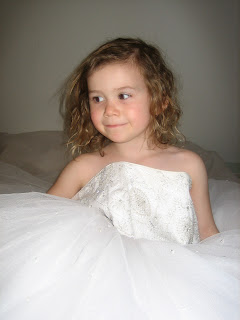 4 - Now it's time for some cute pictures of my kids. These are a little late being posted but it's still the Season of Easter so I'm not gonna fret. 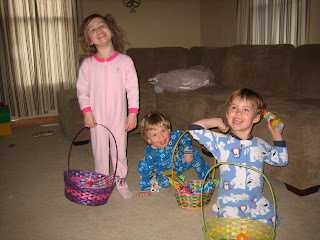 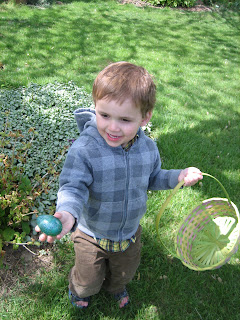 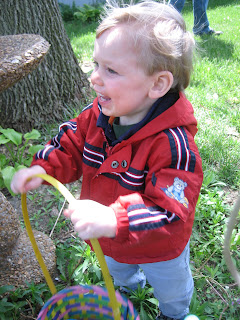 5 - Over at IGNITUM TODAY we're doing a symposium on Mercy and Killing, which grew out of an email exchange about mercy killing.  You can check out my post, Black and White for the Shades of Grey.  It took me a long time to gather my thoughts and write the essay.  I feel like the tone changes and it doesn't flow, but I still hope you read it.  It's intimidating stating that mercy killing parents aren't monsters when the internet is full of people ready and willing to rip my head off for saying such a thing.

6 - It's probably really lame that I can't remember is in the US we're supposed to spell it "gray" or "grey" though it's even more lame that I didn't look it up I just decided to go with the 'e' and keep it at that.  If "grey" is the British spelling let's all just blame my concentration in British literature and call it good.

7 - Tonight my mom is keeping all three kids overnight.  In anticipation I have blown off the whole day ﻿and done nothing but feed and dress the kids at eat cookie dough.  I hope you're gonna do something fun tonight!
- April 27, 2012