1 - JJ Heller, I will see you and Audrey Assad tonight! And you told me you'd sing My Savior's Love Endures for me!  And maybe you'll sing this song, too, which would be very appropriate since it's the Season of Easter and all.  Just sayin'...

2 - I am so excited about this concert.  Some friends and I are going to dinner first.  I will eat fried chicken and watch them drink beer.  I'm not excited about that - I'd like to drink beer, too.  mmm...beer...

3 - Wednesday I officially became 9 months pregnant.  36 weeks have come and gone so quickly.  Jiminy!  At my appointment with the midwife yesterday I learned that I actually do not have gestational diabetes (my bad, I misunderstood) so I feel a lot less guilty about all those Moolattes I've been drinking lately.  I also learned that the little girl in my womb's legs are measuring 40 weeks and the sonographer was guessing for a 9lb 7oz baby.  (I asked for her guess.)

4 - Everything is so different with a hospital birth verses a home birth.  Here's the list of things I can think to bring to the hospital, now tell me what I'm missing:
-change of clothes for pp
-clothes to wear home
-clothes for Baby Girl to wear home
-Baby Girl's blankie, in case it's cool.
-infant car seat
-lap top
-camera
-shampoo and conditioner
-toothbrush, deodorant, brush, make-up, etc.
-whatever stuff Travis wants to bring - he's on his own.

How's that for a list?  I'm really sad I won't have a birthday cake this year.  I haven't even thought about what I would pick.  Maybe angel food cake with berries and ice cream?  Smelling the cake bake while I labored was always one of my favorite things.

5 - In happier news Travis told me a few nights ago that he thinks I look thinner.  By the end of the day my feet, face, and hands may be slightly bloated but my back fat is going away.  I have not been dieting during this pregnancy (remember the thing about the Moolattes?) but it has been my goal to weigh less post partum with Baby Girl than I did when I began the pregnancy.  I'm so tired of being fat. 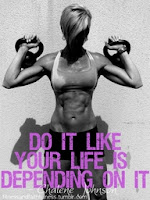 6- Which is not to say I want to look anything like this.  I don't get the fitness inspiration boards on Pinterest.  I would probably feel just as unattractive lookin like that lady as I do now.  Her body is like a teenage boy's but with boobs.  Am I being mean?  Maybe.  I just like soft a curvy.  So does my husband, so that's good.
7-  On that note, I think I'm going to bake the best chocolate chips cookies ever.  Ever.﻿
- April 20, 2012