No sex for months

How's that for a catchy title?  It needs to be catchy because I need people to read this post and offer some advice, send me some links, lend me some books, and let me know if it's gonna suck as much as I think it's gonna suck.

And just to be completely clear - this is a natural family planning postpartum post.  Mucus, breastfeeding, gettin'-it-on, and Church theology will all be discussed here.  If that's not your cup of tea I think the Pioneer Woman is talking about being a rancher, or cooking, or something that doesn't involve my four topics of the day.  You'll be happier there.

In about five weeks I'm going to give birth to my fourth child.  We will be a family of six (6, yo) with all four kiddos being four and under.  As in L will have turned four two weeks prior, Ben will be two and three-fourths and JF will be one and three-fourths.  For the record, this baby was more or less planned.

But after this baby comes Travis and I don't want to have any more kids for a long time... or forever.  Who knows?  God knows.  And He also knows that I feel like the Mad Hatter and need a good, long break from pregnancy, babies, and buying a bigger van.  I've told Him so, and He has a first row seat to my life. 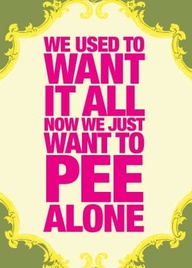 Anyways, all of this is building up to a point and that point is this:  How in the hell do people practice natural family planning when they are:

- breastfeeding, but...
- NOT ecologically breastfeeding
- prone to crazy, hard to read because it's almost always there and varying postpartum mucus
- super, duper, ridiculously fertile

I would really like to nurse this baby but co-sleeping, baby-wearing, nursing on demand, and not letting a kid who wants to sleep through the night, sleep through the night do not work for me.  At all.  Ecological breastfeeding is not an option for me because it transforms me into the worst mother, wife, and person in the world.

TMI alert - after JF was born Trav and I were not intimate for four months because we did not want to get pregnant.  (That's right I wouldn't have even been able to take the Guttmacher survey about nfp and contraceptives because of the very fact that I was practicing nfp!)  I was also not nursing JF, just pumping for awhile but that had stopped by four months.

My husband and I are completely committed to the Church's teachings on sex, marriage, chastity, contraception, and nfp. But that doesn't mean I don't look at the list above and have to remind myself of why I believe those things. 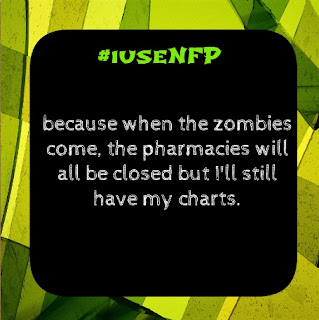 Abstinence is probably our best bet if I really am going to nurse, and I know that because I will not be ecologically breastfeeding my cycles will return sooner.  But I'm still thinking I need to wait a good two or three cycles before we do anything crazy and that could very well mean four, five, six, or more months of postpartum nothingness.  We have done abstinence before but, I will be honest, chastity in those four months was pretty hard at times.

So now the bottom line:  Does anyone out there have any experience with something similar?  Any advice to offer?  Anything?  Surely I am not the only woman God has put on His green earth with a similar situation.  Right?
- April 11, 2012