Thomas the Train Birthday Party for my boys

September is a month of birthdays.  Ben turned 3 and soon JF will turn 2.  My baby brother shares a birthday with JF, but he'll be 29.  My sister-in-law turned 21.  My Grandma turned 86.  And Mary the Mother of God's birthday is celebrated every September 8th.  Everyone's birth, but mostly my little boys', was celebrated with a Thomas the Train themed birthday party. 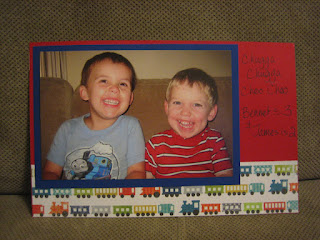 The invite.
My friend, Crafty Katie, and I made them together in an afternoon.
The front reads,
Chugga Chugga Choo Choo
Ben's 3 & JF is 2.
The back reads,
All Aboard for Ben & JF's Birthday Party!
Date
Time
at Engstrom Station
(Did ya like that "Engstrom Station" touch?) 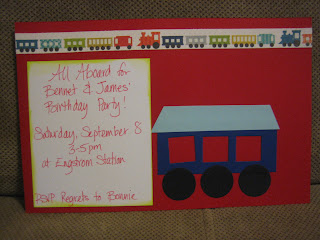 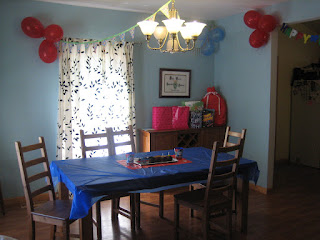 The cake was a line of cupcakes with Thomas leading the way.  I made chocolate cupcakes topped with red frosting and funfetti cupcakes topped with blue.  Oreos served as wheels and I crumbled a few and put them on top of some cupcakes to look like coal.  Pretzels are jovey logs, graham cracker Goldfish are fresh Sodor fish, and MnM's are little packages.  I've seen a few Thomas movies in my day, clearly.  When I explained things to Ben everything made perfect sense to him but I'm pretty sure those less "in the know" on all things Thomas had no idea what was going on. 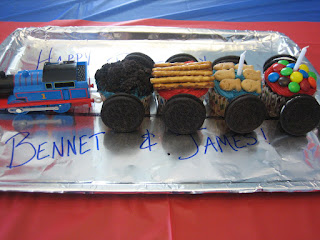 On the kitchen island I had another Thomas pulling more treats. 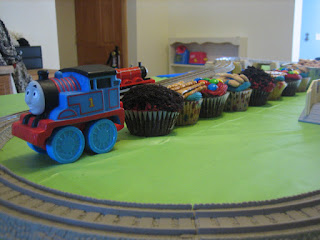 Cupcakes, Sodor Goldfish, Oreo train wheels, pretzel Jovey logs, and regular old grapes.
I used a green plastic table cover (97 cents at WalMart) with a strip of the dining room table's blue table cover as a river and built a train track.  The boys loved it. 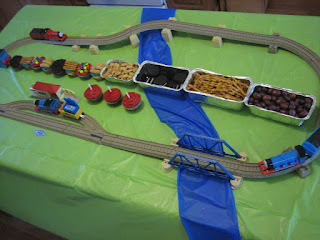 I made signs and hung them around the house.
Here's Percy, Gordan, and James welcoming everyone. (Please note my serious face.)
On the front door I had a picture of Thomas and Sir Topham Hatt saying "All Aboard!"
Over the bathroom sink was a picture of Victor that said, "Victor will get you clean at the Steamworks" because I'm ridiculously funny. 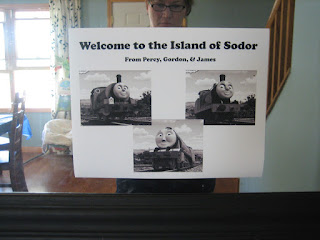 The rest of the cupcakes.  Yum-o. 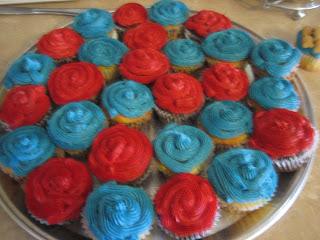 And the happy birthday boys. 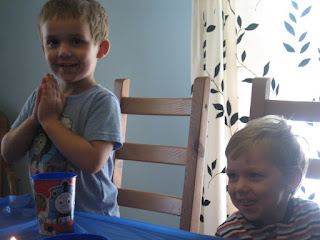