1 - I'm not sure if there's another carol that captures the emotions of the Christmas story better than the first verse of this one.

2 - If you didn't see it, here's a post I wrote called Holy Innocents - why it's best not to tell a grieving parent "God needed another angel".

3 - A mild 24 hour flu slowly made it's way through the house, though Travis and Resa were spared fortunately.  I am hoping and praying that we're in the clear now.  Hope you are all well!

4 - So, what did we bake for Christmas?  Great question! 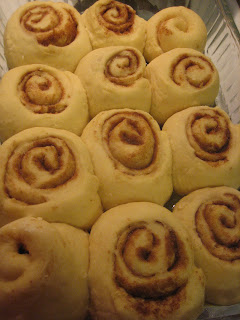 Some from-scratch cinnamon rolls.  My mom always made these for Christmas and Easter mornings and since they're delicious I thought I should continue the tradition in my own home. 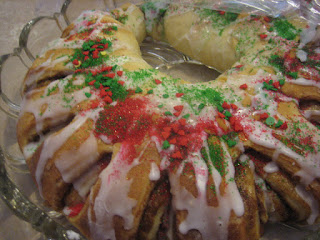 The recipe makes 3 dozen and one of them I shaped into a tea ring.  Or, well, I tried to.  I let the kids top it with some Christmas-y sprinkles which wasn't as exciting for them as they had hoped it would be. 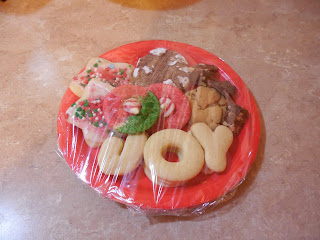 5 - Christmas Eve was spent with my parents, which is pretty traditional. 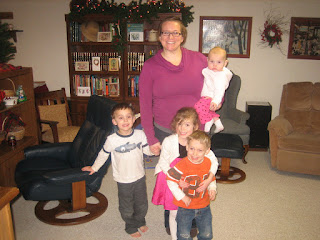 This is the "What I Wore on Christmas" part of the post.
The only person whose outfit is worth mentioning is Ben who wore the catfish shirt with the googely eye.  He insisted and so I let him. Feliz Navidad. 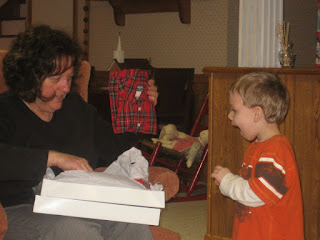 I love the look on JF's face here. 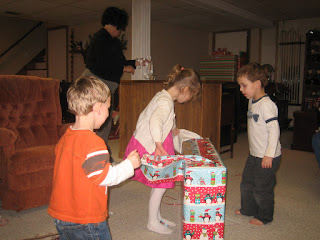 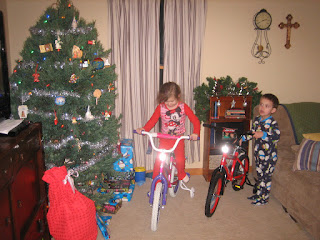 In between the above picture and the next we attended Mass.  During the homily poor JF threw up.  The priest made an expression like, "Oh!" but just kept on talking.  The woman in the pew in front of me (whom I don't even know) turned around and grabbed my diaper bag so I could pull a scarf out of it.  JF and I went to the bathroom, leaving my mom with Resa, Ben, and L while Travis and my friend Jen went to get a bunch of paper towels to start cleaning up.  The couple in the pew ahead of us, turned and had Ben come sit with them so Mom wouldn't have her hands quite so full.  Another friend, who also happens to clean our church, came in and asked what I needed.  She got me a plastic bag to put JF's clothes in and took some Lysol spray to finish cleaning up.  So all this to say that no one was upset and everyone was really great about it.  It was awesome. 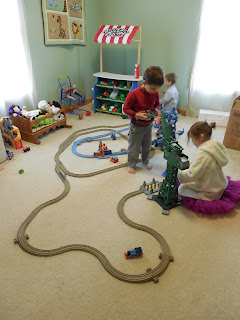 After Mass they played with their new grocery store, train tracks and Creaky Cranky. 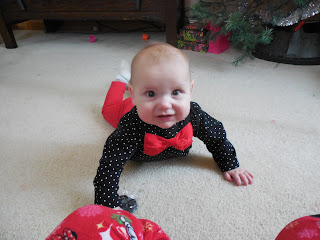 My 7 month old baby girl, wearing the super cute outfit her great grandpa picked out for her.

7 - The rest of Christmas Day and the days since have been mostly spent watching movies, playing with toys, taking naps, and eating yummy food.  I hope you've been blessed this Christmas Season, too.