Advent with the Clan by Cari Donaldson

When I converted, there were some things I envied cradle Catholics for so, so much.  There were the physical, tangible things: baptismal gowns that had been in the family for generations, elaborate holy statues that had been given as sacramental gifts growing up, and, in the most intense feeling of envy- a portion of a priestly chasuble, gorgeously and heavily embroidered and beaded, rescued from a pawn shop in Ireland, carried by hand across the ocean, and given to friend of mine on her wedding day (hey, I’m not proud of the jealousy, but you should see this thing!).


I had none of these.  But I could roll with that.  I borrowed my best friend’s baptismal gown for most of my children’s baptisms, and when I couldn’t anymore, I bought an antique one somewhere.  My next-door neighbor recently had a garage sale where she sold massive amounts of her deceased mother’s holy statues, and I scored a killer old school St. Jude (minus the flame which had broken off at some point in its past- more authentic, right?), for less than a quarter. 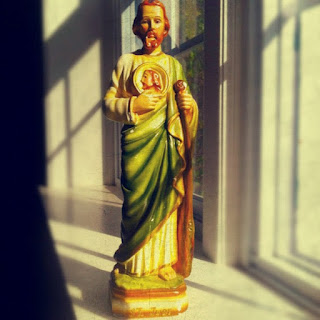 As resourceful as my faux-Old Catholic finds have been, I’m still unable to get my hands on a portion of an ancient chasuble.  But I haven’t given up yet!


Beyond the material goods, I envied and longed for a set of liturgical observations within our domestic church.  I watched friends celebrate feast days, anniversaries of relatives’ religious vows, and the cycle of the liturgical year employing a language of tradition that I could understand, but didn’t speak.


Growing up, Christmas was the great religious celebration of the year.  The whole house, inside and out, was transformed into a twinkly, glittery, glowing Otherworld.  Decorations went up the day after Thanksgiving, culminating with a joyful observation of “This ornament is mine, and when I leave the house, I’m taking it with me,” played by my brother and myself as we trimmed the tree, with my mom the pleasantly outraged arbitrator.  I took this love of Christmas decorating with me when Ken and I started our own home, and we’d amassed quite a collection by the time we became Catholic.


Then, for the first time, I met people who actually observed Advent.  Like, in their homes.  Like, beyond the pine wreath displayed neatly on a side table in the church.  I met people who did things like “fast from Christmas” and resisted hanging up lights and stockings and trees until Christmas Eve. Christmas Eve!!
I thought they were crazy.


But as my children got old enough to 1. Realize what presents were and 2. Understand that they could reasonably expect to get some on Christmas, the logic and wisdom of spending time preparing, spiritually, and not just physically, for the holiday started to make sense.  I think it was the 40th Wal-Mart toy catalog I came across containing a complicated color-coded, cross-referenced cataloguing system of who wanted which toys was the tipping point.


In a rare moment of moderation, I knew I couldn’t tear down all the decorations and shove them in a closet for the next three weeks.  I had to find a different, gentler tonic to the materialism we’d all found ourselves infected with.  So I looked to my betters, started scrutinizing all their Advent traditions, and ultimately picking a few of them to introduce into our home.


The first and easiest came with how we set up our Nativity set.  We put the Magi a distance away from the painted plaster figures my grandmother had made when I was a child.  We explained to the kids that the three wise men didn’t reach the Infant until Epiphany, and that their journey was like ours, moving ever closer to Christ, with our eyes on Heaven to guide us.  The kids take turns moving the camel and kings a little closer to the crèche, and the whole thing serves as a tangible reminder that Advent is a journey with a destination bigger than the presents under the tree.


The second thing we do I stole from my friend Janice, who, since it’s generally accepted by everyone (but her, of course) is a livingsaint, is the exact sort of person one should look to for spiritual advice.   All during Advent, on the center of her dining room table there sits an empty wooden crib and a jar of pine straw.  As the family performs acts of service and love for others, they place a piece of pine straw in the crib.  Come Christmas Eve, they place their statue of the Infant Jesus in the crib, and there He rests on a piney mattress of their good works.  Forget about threats of Santa leaving a lump of coal- nothing spurs my kids on to good behavior better than a mournful assessment of the poor quality of baby Jesus’ bed.  Suddenly, I’ve got kids falling over themselves to show love of neighbor, and the tiny pine straw mattress grows thicker by the hour. 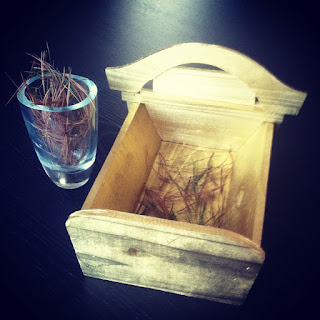 Lastly, we have an Advent calendar that my mom made for us, and finally, after years of agonizing over which one to buy, Ken went ahead and made me an Advent candle holder.  Now, I just need to figure out simple, practical ways to anchor those two time markers into spiritual lessons that our child army can access, and I’ll be set. 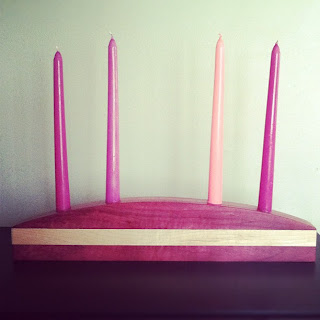 Those are the two words that I’ve tried to keep in mind while developing our Advent traditions:  simple and practical.  In my often desperate attempt to create a sort of Catholic pedigree for my family, I sometimes forget the reasons behind the rituals.  And in the case of Advent, the reason is to strip our interior life of all the extraneous so that our Savior can be born in hearts as humble as a manger.


But while I’m readying my heart by stripping things down, I’m still going to ready my house by putting things up.  That house isn't going to decorate itself.
Cari Donaldson is a wife, mom, homeschooler-extrodinaire, and master of photo shop.  She does not really care for Taylor Swift but her tween daughter loves her.  Cari blogs at Clan Donaldson, sharing funny stories about family life in Conneticut.  She is also a contributing writer for Catholic Exchange and you can find her on Facebook.  Cari is funny and sarcastic without being snarky or mean, which I love about her and her writing.

For more posts on Advent traditions and reflections check out the Advent series.
- December 03, 2012