Celebrating the Immaculata by Alisha Landry

Happy Solemnity of the Immaculate Conception!

Our celebrations for this feast day will look similar to the last two years. Here's what we did in 2010 and 2011. That's the beauty of forming traditions - you can do the same things each year and it's not considered lazy!

But I'll be honest, we've scaled back from the first year. There's something about having a 2 year old, a 4 year old, babysitting another 2 year old & being 4.5 months pregnant that makes you keep things simple. In fact, this entire year, I've been keeping the celebrations super simple and haven't been blogging much about it, either. I'm still grateful for the people who do, but I'm not called to it!

Anyway, these are the traditions we hold:

- We'll watch this little clip from the Bernadette movie


- Then each girl will color the Our Lady of Lourdes image from Waltzing Mathilda and I'll hang it from the light in their room like before. 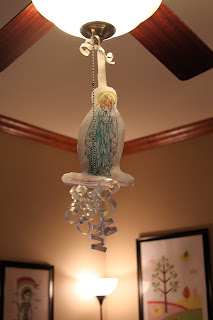 - During the younger girls' nap times, Joan will watch the 1988 film Bernadette.  It is available on Netflix, but not their Watch Instantly feature, unfortunately.

- After naps, they can color this second image of the Immaculate Conception from Catholic Icing and maybe do some role playing with babies under their shirt. It should be easier to understand this year, now that their own mother has a belly full of baby.

- And for a new tradition this year, after we light our Advent Wreath and say our evening prayers, the girls can toast with sparkling white grape juice in little wine glasses. 'Cause we keep it classy.

If you haven't been there already, I would suggest visiting Catholic Cuisine for ideas on meal planning around this and many more feast days throughout December.

May the Solemnity of the Immaculate Conception and the rest of your Advent Season bring you closer to the heart of God through the birth of His Divine Son.
Amen.
Alisha Landry is a little sassy but her southern accent magnifies sass.  Alisha is happily married to the majorly talented graphic artist Jude Landry.  Together they have two adorable little girls, who say the darndest things, and another one on the way.  A Louisiana girl by birth, after a brief stint in central Illinois, Alisha is back in the deep south, crafting, being funny, and blogging about it all at Those Landrys.

For more posts on Advent traditions and reflections check out the Advent series.
- December 08, 2012