We've never bought a dresser.  Travis' came from his parents.  Mine came from my parents, who got it from my grandparents.  L's was bought at an auction and refurbished by my dad.  JF's was found in my parents' basement and cleaned up a bit.  Ben's was a broken down one left in the house when we bought it.  Resa's was given to us by some friends who ran out of room in their moving van.

So when I noticed that my Great-Grandmother's dresser was just sitting in my parents' basement I asked if we could have it so we could pass mine on to Ben and get rid of his.  After much guilt-tripping my dad finally said yes and then, out of the kindness of his own heart, he refinished it for me. 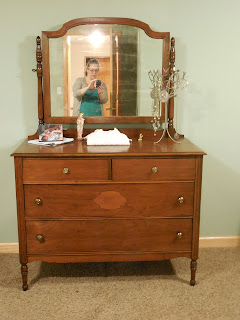 My dresser houses my favorite things.
There's the Baptismal gown all my kids have worn.  It was handmade by my friend Sr. Marie Noelle.
There's a little statue of Peter Pan, because I love that story with its mermaids and pirates and fairies.
There's the handkerchiefs my friend embroidered for Travis but he hasn't used.
There's a picture of JF in the NICU to remind me of where we've been.
There's a statue of Mary with the Infant Christ.
And there's my jewelry tree that holds several special items. 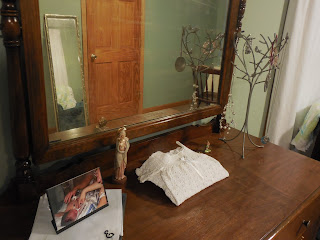 A medal of Christ holding a baby, which reads "Safe in the arms of Jesus." Someone who reads my blog anonymously sent it to me in memory of my son Peter. 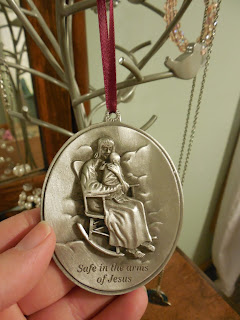 The people who read my blog are the best.  Seriously.
The back is even inscribed with his name and the year he lived. 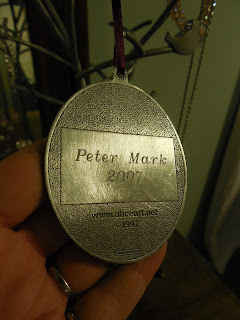 This rosary bracelet has a miraculous medal, given to me by my college chaplain who received it from his personal friend, Mother Teresa. 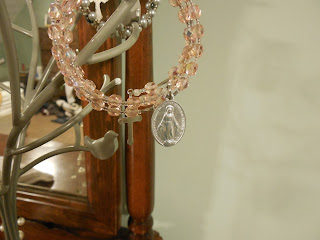 With the new dresser came some other rearranging.
The "office" area became more of a seating area. 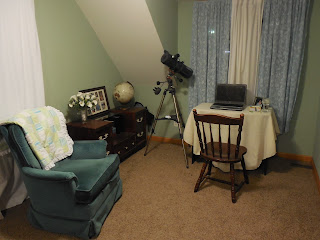 This is the frame that sat on my old dresser.  I put it together years ago, when Travis and I were newlyweds. There's JPII holding the Blessed Sacrament, some statues from Poland, Fulton Sheen (yes, he was watching over JF's birth), Michelangelo's Moses, pictures with friends, the coast off Highway 1, and the sunset in my backyard.  It's a collection of some of the best places I've been in life and some great people I've been there with. 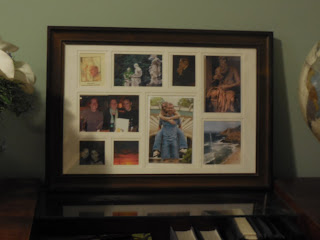 Email ThisBlogThis!Share to TwitterShare to FacebookShare to Pinterest
Labels: good to be Catholic, the dump