WE ARE NO LONGER TAKING NOMINATIONS FOR THE SHEENAZING BLOGGER AWARDS.

THANK YOU TO EVERYONE WHO NOMINATED!

Well folks, here it is, the nomination form for the first ever* Sheenazing** Blogger Awards!

The Sheenazing Blogger Awards are named for Venerable Fulton J. Sheen.  Sheen was amazing at using the newest forms of media to communicate the beauty of the Catholic Church and his love of Christ to the world.  I'm positive that Sheen would be a blogger were he alive today and that he is in Heaven, totally approving of this award.

I'll gather nominations through Sunday.  On Monday I will share with the bloggers that they have been nominated and official voting will then begin on the next day.

The winners will earn a firm, virtual handshake, the pride in knowing that they've been named the Best of something by a fairly obscure blog, and the right to display the following on their site: 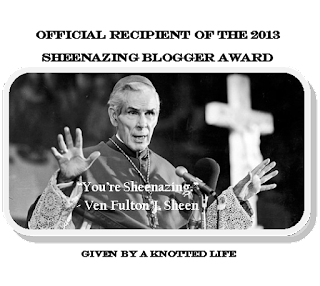 So go and nominate and make your favorite bloggers' dreams come true!

**Originally I was going to name it the "Sheentastic Blogger Awards".  Fortunately I googled the word Sheentastic and learned from Urban Dictionary that it means you're having a good night, like one Charlie Sheen would have, complete with cocaine, hookers, and pot.  Not really what I was going for.