1 - Whew!  In the end 1776 people voted for the Sheenazing Blogger Awards.  When I decided to do this little thing I seriously thought there might be 60 votes total, all from people I know.  I was so blown away by how much everyone loved doing this.  Thank you for being a part of it. 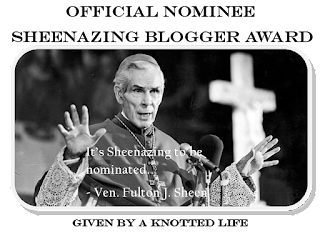 2 - There were a few moments where I felt discouraged by some comments but even then I knew that the commenters had a good point.  A couple of weeks ago I wondered if there still were Catholic blogger awards.  Five days later I decided to host one myself since I couldn't find anything else out there.  And two days after that nominations were open.  There were a lot of things I didn't think through and some more I would have never seen coming no matter how I thought things through. Now that I've done this once I think I have a strong inclination to do it again next year with a couple of tweaks.

But everyone has to promise to remember that I'm just a stay at home mom, busy with a lot of little things, okay?

And to the vast majority of people who emailed, facebooked, or tweeted at me - sending gratitude and encouragement my way: THANK YOU!  It really did make a difference.

3 - Here's my latest post at Ignitum Today, The Path that Leads to Awesome.  It's even more thoughts from me, inspired by Kid President's Pep Talk.

4 - Just a reminder that tomorrow is the Authentic Friendship talk at St. Phil's in Peoria.  The talk will be given by Sr. Helena Burns and Lisa Schmidt and is being sponsored by First Saturday Peoria.  I hope you can come!

5 - I've never wanted to try one of those green monster smoothies.  Why?  Because they look like this 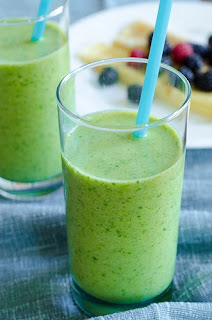 which is to say they don't look appetizing at all.  My mom made me one and it turns out I was right.  I felt like she had cleaned off her lawn mower blade, put the contents in a blender, added a bit of fruit and soy milk and called it good.  But then she made me the Chocolate version and I was sold.  Here's the recipe if you're interested:

I've played around with the ingredients a bit depending on what I have and because I'm cheap.  I've halfed most of them but the banana and never used the flaxseeds.  Still delish.

6 - Does anyone have a good Oatmeal Scotchie recipe?  I tried one yesterday and they are okay.  I was hoping for something softer and less dry.  Maybe I baked them too long?  Anyways - the search is on!

7 - Did you notice I didn't start with a song?  It's because I wanted to end with one this time.