1 - If you rightfully began your 7QT adventure at Jen's then you know that she mentioned my Twitter profile picture in her #5.  I have to confess that when I read the first sentence, "Bonnie‘s photo is one of the rare ones that looks even better in a small format," my heart dropped a little bit and I immediately thought of this:

If you're not familiar with A League of Their Own I'll give you some context.  In the film, a news report about the all women's professional baseball team is shown and it highlights all the players who are both very good and very attractive.  There's close-ups on all their pretty faces except for poor Marla Hooch who is not a looker.  For Marla there is just a long distance shot.
Of course my wounded pride quickly recovered when I read the rest of Jen's very kind words, but I still thought the whole thing was funny and wanted to share it with you all.

2 - How about a song now?  Florence's videos are a little weird and I don't let my kids watch them.  They're not bad necessarily; they're just weird.  And I was pretty much scarred by watching Peter Gabriel's Sledgehammer, Genesis' Land of Confusion, and Tom Petty and the Heartbreakers' Don't Come Around Here No More when I was a girl so I'm probably a little overprotective about such things.
But the song is really great.


3 - On this coming Tuesday I will be 20 weeks pregnant and today I saw my midwife for the very first time.  How's that for putting things off?  I had this horrible feeling that something was wrong with the baby and I wanted to put off knowing for sure for as long as possible.  Ignorance is bliss, right?
But the good news is that the baby looked great in the sonogram.  This cute, squirmy little thing.  She wouldn't let me see her face but she was beautiful - all 13 ounces of her.

4 - In honor of my red lips being included on Jen's blog I thought I'd pass on a little tip about wearing lipstick.  I loved my "Red Revolution" lipstick (it looks pink, though, doesn't it?) but it wouldn't stay long, filling in all these new cracks in my lips and looking not so great.

After getting over the fact that I'm getting older and that's why my lips have valleys for lipstick to drain into, I did some research and was told to invest in some neutral lip liner.  That has made a HUGE difference and I'm so glad I did it.  I bought a shade that matched my natural lip color in the Cover Girl line.  There's probably better stuff out there but this is nice.
And if you've wanted to wear some bold color on your lips I say DO IT!  I wanted to for a long time but just felt like I couldn't pull it off.  And then I decided that I could risk looking like a fool or I could risk wasting all kinds of time of not wearing lipstick that made me happy.  So I took a risk.

5 - This Lent I wanted to step back from things online and so I deactivated my Facebook account.  It's been nice and not-so-nice.  The nice: it's forced me to reach out to people and connect.  For example, I've talked to my friend Lisa more this Lent than I did in the last year.  The not-so-nice: Facebook is the only way I have to keep in touch with many people.  For example, today the kids and I were building snowmen and it reminded me of a a time when my cousin and I built a snowman in my backyard.  I wanted to message her and say, "Hey I thought of you and I hope you're well," but I don't have her email address or phone number. So here's hoping she reads my blog!
MW, I miss and love you and wish you the best!

6 - Tuesday, February 26th I'll be speaking at the Knights of Columbus Hall on the square in Washington, IL.  I'll be sharing JF's story, plus talking about Fulton Sheen and the canonization process.  The event, which is hosted by the Elizabeth Ministry group of St. Patrick's Parish, begins at 6:30pm and is free.  If you're in the area it would be great to see you!

7 - Lastly, here's a cute, funny picture of Resa.  That girl makes me so happy. 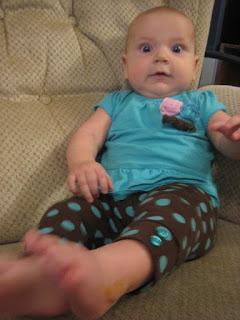 Many thanks to Jennifer at Conversion Diary for hosting!  Have a wonderful weekend!
- February 22, 2013