Part 2 of A Conversion Story that Ends at Easter Vigil

This is Part 2 of Emily's conversion story.  You can read Part 1 here.

When I met my husband, Ben, I had moved to Washington State from Arizona, where I graduated high school. My father and most of my family lived there in Washington and my paternal grandmother had offered to pay for my community college education if I came to live in Washington. When I agreed, my dad had been sober for the first time in years and I planned to move into his house. Shortly before leaving Arizona, I discovered he had started drinking again and it was too late to change my plans. The next year was tumultuous, painful, and full of grief for me. Alcoholism is truly a devastating disease.

I met my husband through a small young adult group. We would read Christian non-fiction and discuss it. It was led by some married couples and not a part of any church (remember my church fixation?). Ben was in a discipleship program where he lived in cabins with other young adults and they had daily classes on the Bible and other topics. It ended with a mission trip. He was (and still is) very quiet in group settings and I barely remember him speaking during our discussions. I am pretty outspoken, so I’m sure he knew full well how opinionated I was (he knows this even better now). When we started dating (6 years ago on Valentine’s Day) I was smoking and in a very dark place, despite fully believing in God and his goodness. Ben encouraged me to stop smoking and we soon became inseparable. We married, when we were both 20, 8 whole months later.

We were attending a church through which Ben had a worship leader internship and he really adored the pastor. It was still a struggle for me to want to go to church on Sundays and we would often fight about it. After our honeymoon I decided that I felt like birth control went against the character of God and that I thought it was wrong. Ben was not as sure, but supported my conviction to stop using birth control. Gwen was born 15 months after we said, “I do”.

When Gwen was about 3 months old we moved to Arizona. This was a pivotal decision in our marriage and lives. Ben had lived nowhere else but this small Washington town and his parents were very sadden by our move. After arriving we started searching for a “home church” right away. This was when we became disillusioned with the evangelical way of thinking. There were so many churches, so many denominations, how could we know which one was “right”? We lived in Phoenix, which is a city of millions, so you can imagine the sheer number of churches that were in our area. We probably went to ten or more different churches. We’d stick with one a few Sundays and then something would happen or someone would say something, and we’d stop. Eventually we stopped making any effort to attend church.

What followed was a difficult season for both of us. God was what connected Ben and I. We grew up very differently and were extremely unique from one another. For a while, it seemed we could only bond over Gwen. We fought constantly and even considered separating. We must have liked each other at times because while living in Phoenix we became pregnant again when Gwen was 10 months old. We lived in a one bedroom apartment at the time and I was honestly devastated by the news.

After Avalene was born something in me shifted. I knew she was a gift and I could finally see that, even if while I was pregnant I struggled. I missed the Lord. I knew he was always with me, but I started to feel my absence from him. One day as I was driving around to kill time with my two under two girls, I drove past a sign advertising a Catholic radio station. I tuned in and coming from my speakers was the voice of a woman who had written, with her husband, several parenting books I nearly worshipped. I sat in my car in awe about what I was hearing. She and her husband had become Catholic and she was linking all of their parenting beliefs to their faith. It was beautiful and just the encouragement I needed. I started listening to that station every time I was in the car and downloaded the app so I could listen at home too. I would sit in my car for as long as I could - even after arriving at my destinations - so I could keep listening to the wisdom streaming through my speakers.

After what must have been weeks to a month, I contacted the only practicing Catholic I knew: the mother of that friend I had so many years ago.  I asked her if I could attend Mass with her one day and she heartily agreed. I pulled up to the gorgeous church and felt like it was the first day of school: full of hope and possibilities, but also fear of rejection. She was so kind, just like I remembered. I loved every second of the service, even though I had no idea what was going on. The homily was beautiful and the whole experience was serene and full of peace. Afterward we walked into the gift shop and she bought me a book, Rome Sweet Home by Scott Hahn. I devoured that book. It touched on so many things I knew and was familiar with (Young Life being one, Christians not believing Catholics were really Christians being another).  Ben knew I was listening to Catholic radio and knew I was interested in finding out more. He was supportive and curious. I insisted he read Rome Sweet Home and he also found a gold mine inside as I had. We started talking in much more detail about our faiths and what the “true church of Christ” would look like. More and more God seemed to be leading us to the Catholic Church. I discovered Catholic bloggers like Jen at ConversionDiary, Bonnie when she was writing at Learning to be Newlywed, and more. I was in awe of these godly, funny, intelligent, mothers who wrote so elegantly about their faith and so honestly about motherhood.

I continued reading and thinking and praying until one day I said to Ben, “I think I want to be Catholic”. He was a little taken aback with me just throwing it out there, but probably not totally surprised.  But we asked, ‘what do we do next?’ We still weren’t going to Mass regularly and had yet to really connect with anyone who could help us go deeper into the journey. We contacted a local parish and requested a meeting with the faith formation leader. When we arrived he had mistakenly thought we were there for a baptism class for our kids, but once we explained that we wanted to do faith formation classes ourselves, he quickly got on track. The RCIA class had started a few weeks earlier and he would not let us join. Being more knowledgeable about RCIA now, I am surprised he would deny letting us in.  RCIA is just once a year and even if we didn’t enter the Church that Easter, I am shocked he would not let us in the class, as eager as we were, simply because we didn’t know it had already begun. I’m sure now that it was God’s plan for us, but at the time we were really discouraged. We wanted this and yet we were denied. He encouraged us to come to Sunday Mass, but we didn’t go even one time. I think for people like us who are coming from a non-Catholic background and without any Catholic influence, relatives, and friends, going to Mass by ourselves was pretty intimidating. I am saying that from our perspective only. And maybe our pride or comfort was a factor as well, but going to Mass when you don’t understand anything going on is difficult.

Less than a year later, we moved back to the small Washington town where we met and married. As soon as we got here, I contacted the local parish. Kay called me back no more than a day later, bursting with excitement as I explained Ben and I wanting to attend RCIA. Her excitement at teaching others has continued through the entire class and I am very thankful this is the class we are in. Our priest attends the classes as well and is a wealth of knowledge and wit. A winning combination in a spiritual leader, I assure you. And here we are, on the cusp of Lent, finally about to become Catholic. 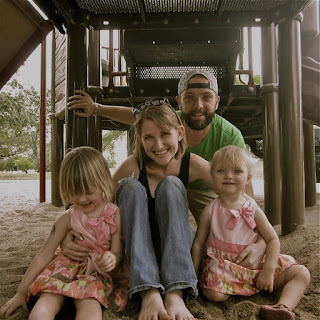 On Easter this year, Ben will be confirmed in the Church. I will be baptized and confirmed. I should explain that baptism was available to me many times in the years that I circled in Protestant churches. But I always declined because it never felt “right” to me. I was waiting for something. And now I know God was preparing me to be baptized into his true church. I cannot put into words the emotions that surface when I think about finally, after 26 years of life, being baptized.

It is still a journey and we learn more at every class and at every Mass. I love that the Church teaches that acceptance of Christ is not a one-time thing, but an ongoing, daily, acceptance. We are thrilled that our children (soon to three kids) will grow up in a rich faith tradition, full of sacrifice, beauty, grace and history. God has truly led the path we have been on. And I can say with certainty that any hardship or suffering I experienced will be redeemed the moment the holy water touches my body and makes me new again. Praise God that in his love we are made free.

Thanks for reading. Please keep my family in your prayers. God bless you all.

Many thanks again to Emily for sharing with us the story of how she got from a lost soul to a soon-to-be squeaky clean, filled with the Holy Spirit, happy-to-be-so Catholic!
If anyone has any questions or comments for Emily please feel free to leave them in the comment box; she will be checking it and is happy to engage in conversation.  And please remember to pray for Emily, her husband Ben, and they're growing family as they fast and pray their way through their first Lent and anticipate joining the Roman Catholic Church this Easter Vigil.  And go follow her blog, Glitter Rainbow Happiness Land.
- February 12, 2013