1 - Matt Costa.  This guy is so good.  Way back in the day I bought his album Songs We Sing and it was literally an album that I could listen to every single song.  Unlike James Blunt's album. Only good song on that  one was "You're Beautiful" and the rest was un-listenable for me.  But not Matt's stuff, or at least not the stuff I've heard.  I like his sound... and the fact that he releases his albums on vinyl.  Gosh I love how music sounds on vinyl.

2 - Oh my gosh!  Did you hear the news?!  Joy Behar is leaving The View!  Thank You, Jesus!  That woman is so anti-catholic and full of hate - wow.  I barely watch that show because of how horrible they are towards Christians, conservatives, traditionalists but I'm pretty sure every time I have watched it Joy has said something incredibly insulting.

3 - On a related note, I was at my parish's moms' group this morning and made a very helpful declaration.  NBC, ABC, CBS - listen up!  What you need is a show like The Talk or The View except the panel of women need to be Christians - maybe even a Jew.  And I mean orthodox, devout, faithful, Bible believing Christians.  Get someone from a non-denom church, a Roman Catholic, I know an Apostolic Christian who would be perfect.  There would still be disagreements and discussion - about contraception, married clergymen, politics, movies, celebrities, holidays, etc.  These women would have to be good. Funny, intelligent, approachable, talented, good.  I know there's The Catholic View for Women and The Gist but I'm talking about network tv and something that is not first and foremost Christian but primarily entertaining.

(I'm coming back to clarify this last statement.  I think The Gist is entertaining - I never watch The Catholic View for Women so I can't comment on that one.  What I meant to say was that the show's goal should be to be interesting and funny and intelligent and only be Christian in that the women presenting the information are Christian. I don't think it's primary goal should be to present a Christian message on tv that is also interesting, funny, and intelligent.  I hope you understand the difference.)

4 - Did you enter the Giveaway?  I don't want to tempt you on a Friday in Lent or anything, but let me give you one good reason why you should: 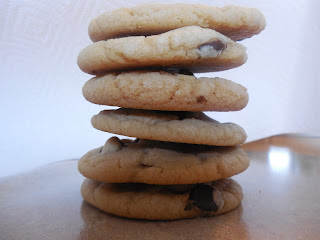 5 - I made pancakes for breakfast the other day.  The boys left the table to play Mass and as L finished she eyed the one leftover pancake.  "Mommy, can we use that for the Holy Eucharist?"  When I told her yes she ran off, waving the pancake and yelling, "Ben!  Mommy gave me a pancake for the Holy Eucharist!" When I was a kid we tore up bread, smooshed it flat, and used our thumbnail to make a cross on it.

6 - JF had two and a half hot dogs for breakfast.  You should feel better about your mothering now.
Oh you don't?  Well, Resa, my nine month old baby was just found eating the other half. That should make things better.

7 - We've started cloth diapering again.  Resa wears them during the day (when they're clean) and Ben wears one at night.  I'm hoping this will make a good dent in our grocery bill. We go through so many diapers with JF because he sharts all day long so I need a break in the diaper area of the budget.