We are climbing out of the stink and yuck of the flu in these parts. L and Ben gave it to Travis and me and then JF succumbed. I was a little worried, as we headed to Mass this morning, that JF wouldn't be over it the way I thought he was and do another holiday treat for us like he did on Christmas morning. But luckily we seem to be all good! 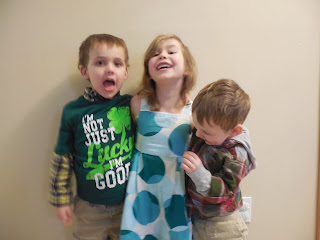 The kids' Mass behavior was pretty good. Short homilies help so much with that! Afterwards we treated them to Shamrock Shakes from McDonald's... some day it'll be green beer.
We all wore green, because we're like that, but we were so late we had to sit in the cry room. 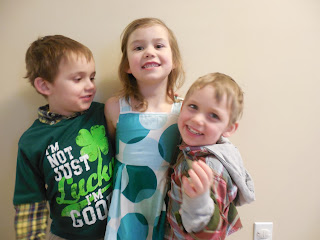 It's a bit chilly here still and the girls wore cardigans and tights and looked so, so cute. 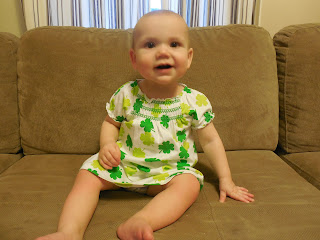 Poor Resa was so tired. "Just let me nap, Mom!" 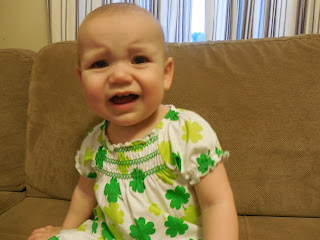 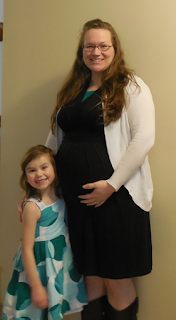 I don't love this outfit.
I don't really love how I look any more.
But soon I'll be holding a newborn and then maybe I can lose all the weight once and for all.

Lastly, thank You God, for hand-me-downs and gifts. My kids would have been naked today without them.

Quick confession:
I have been failing as a Catholic mom lately. I'm behind on homeschooling and this would have been a great week to do the letter 'P'.  Granted I was sick but - come on! - "Pope" and "St. Patrick" all in one week.  Instead we're on "O" for whenever I get around to that.
I'm pretty sure my kids have no idea what a pope even is, let alone that we have a new one.
Also, despite the fact that I have a great book

to explain everything secular and religious about St. Paddy's Day we've barely read it. (Opting instead for the super easy Brown Bear and Freight Train reads.)

But today I read it super quickly while the corned beef roasted and I served it with mashed potatoes and peas... because I felt like there should be something green on the plate.

Dessert was totally JF-friendly cupcakes! No eggs, no dairy, baby!
(You can see the recipe here if you want.) 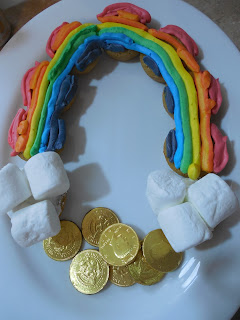 The rainbow cake will be served at my Tuesday mornin Mom's Group.  Come if you're in the area. :) 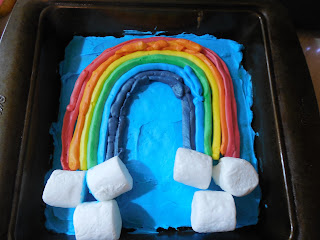 Email ThisBlogThis!Share to TwitterShare to FacebookShare to Pinterest
Labels: being fat, food, holidays, pregnancy, what I wore Sunday