Gosnell should enrage us all

Everything I've seen and read about Dr. Kermit Gosnell makes me want to turn away and cry. And then it fills me up with piss and vinegar. Don't know what I'm talking about? Let me bring you up to speed.

First, take a look at the Overview from the Grand Jury Report regarding the criminal trial against Dr. Kermit Gosnell.  It's important to read because it's not written by people who are pro or anti abortion. It is simply a stating of facts.

This case is about a doctor who killed babies and endangered women. What we mean is that he regularly and illegally delivered live, viable, babies in the third trimester of pregnancy – and then murdered these newborns by severing their spinal cords with scissors. The medical practice by which he carried out this business was a filthy fraud in which he overdosed his patients with dangerous drugs, spread venereal disease among them with infected instruments, perforated their wombs and bowels – and, on at least two occasions, caused their deaths. Over the years, many people came to know that something was going on here. But no one put a stop to it.

Let us say right up front that we realize this case will be used by those on both sides of the abortion debate. We ourselves cover a spectrum of personal beliefs about the morality of abortion. For us as a criminal grand jury, however, the case is not about that controversy; it is about disregard of the law and disdain for the lives and health of mothers and infants. We find common ground in exposing what happened here, and in recommending measures to prevent anything like this from ever happening again.

It's a long document, but you can read the rest here if you wish.

Now, take a quick look at this and take in all the information presented here. 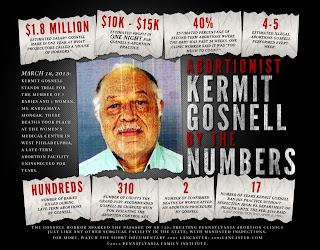 You'll also want to watch this video, though not with kids around.


And if you haven't yet read the following articles I strongly suggest you do.
From USA Today Philadelphia abortion clinic horror
From the Patheos website Washington Post reporter explains her personal Gosnell blockout.

Here's some more articles questioning the silence from mainstream media. As of 1:00pm central time there was nothing from NBC, CBS, ABC, CNN, The Washington Post, The Wall Street Journal, The New York Times*, The Chicago Tribune and so on.
From The Hill GOP lawmaker blasts Obama , press for ignoring PA abortion trial
From The Atlantic Why Dr. Kermit Gosnell's trial should be a front-page story
From The Daily Beast Why isn't the trial of abortionist Kermit Gosnell on every front page in America?
From Slate Kermit Gosnell: The alleged mass-murderer and the bored media

Again, you may want abortion to be legal in the US. You may even be okay with late term abortions being legal. I wholeheartedly disagree with you but we should be able to agree that all of the following is wrong and deserves at least the same amount of news coverage as Jay Z and Beyonce going to Cuba:

- 2 women dead because of the poor care provided by Gosnell.
- Hundreds of babies who were born alive after an induced labor who were then killed by Gosnell or his staff piercing their necks and snipping their spinal cords. These babies were viable and older than many of the babies one would find in a NICU. That's not abortion - that's murder.
- Gosnell spread venereal diseases amongst his patients by reusing disposable tools and not cleaning them.
- Gosnell's clinic was reported several times over the course of several years and they were never investigated.
- Gosnell's clinic went 17 years without an inspection.
- White patients were treated much better than black patients and women from other minorities.
- Untrained and unlicensed staff were administering drugs illegally and dangerously.
- The bodies and miscellaneous body parts of aborted babies were stashed throughout the clinic, not properly disposed of.

This is disgusting, horrific, vile, inhumane - and I'm not just talking about everything that Gosnell did.  I'm also talking about the fact that outside of the prolife community (who has been tweeting, blogging, and speaking about it for months) people are not talking about this. Because here's the bottom line, folks: Gosnell's clinic in Pennsylvania is not the only place this kind of stuff is happening.  You want "safe, legal, and rare"? Then you should be enraged and you should be raising hell.

Two more things: I've seen some pretty harsh statements about Gosnell and his staff. Instead of cheering for their damnation we need to pray that they will repent and seek God's mercy.

Secondly, if you or someone you know works in the abortion industry and you are ready to get out please check out Abby Johnson's organization And Then There Were None. They will help you find new work and even pay bills until a new job is found. They also offer legal support and emotional support. Please, consider this your opportunity!

UPDATE: Salon has a piece saying there is not Gosnell cover-up because when the news first broke in 2011 people covered. it. What the author says is true - I kept Gosnell on my radar because I did hear about it way back in the day. However, as more facts came out and as Gosnell's trial started and continues the media has remained mostly silent. I remember watching OJ being chased by the police. I remember  updates on his arrest, time in prison, and the live streaming of Judge Kato's courtroom during OJ's trial. The media did not just report on OJ (or Lindsey Lohan or Parish Hilton or Amanda Knox) when they were first arrested and then said, "There - covered that!" and moved on. NO, they continued to update the population and kept us up-to-date in an almost obnoxious way. I'm not asking for the same coverage as the OJ trial but I think the media should have come back to this story as more information came forward during witness testimony and so forth. So sorry, Irin Carmon, your defense is not good enough.

*UPDATE: I just found an article from March 18,2013 from The New York Times discussing the opening of the Gosnell trial. I am very glad to have found that but as I stated in the above update, the coverage should be ongoing for something like this.
- April 12, 2013

Email ThisBlogThis!Share to TwitterShare to FacebookShare to Pinterest
Labels: pro-life