Thanks to Hallie for hosting!


#1 - The EpiPen. Because JF would maybe be dead without it. Really. Here's the story: 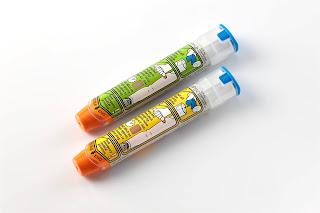 JF's mother is illiterate and stupid and buys her milk based on the color of the carton and not the actual words written on it. Because of that two weeks ago today, after baths and while we were getting the last child ready for bed I gave JF a bottle of whole milk instead of soy milk - because they both have red tops. After drinking less than 2oz he started to break out into hives, itch, get really snotty, and then throw up. Obviously he was having a reaction but I didn't know to what since I was still thinking he was drinking soy milk. Travis was at a track meet so THANK GOD my mom had decided to come over that night to help with dinner and bedtime. I gave JF some Benedryl, which he threw up. Then I went to change his diaper and laying on the changing table his eyes started to swell up, he got a spacey look, and his breathing began to sound wheezy.

I swung the EpiPen into his thigh and took him to the ER.


#2 - Living in a small Catholic world.
Last week I saw my irl friend Elizabeth tag Ashley Collins on Facebook. Since I follow Ashley on Twitter and think he's super awesome I became super excited, in a "oh-my-gosh!-you-know-Ashley-Collins!?!" kind of way. Which of course he saw. Only slightly embarrassing.

Then I finally put a bunch of things together about Jenny Uebbing. Like that she was a FOCUS missionary and her husband's name is Dave, and their last name is Uebbing and then I realized that when I participated in FOCUS training in 2004 I met Dave. I sent her a creepy email asking if Dave was smart and funny and an Eagle Scout and I looked a pictures of them on Facebook. I've never met Jenny (unfortunately) and Dave doesn't remember me but I'm still counting it! 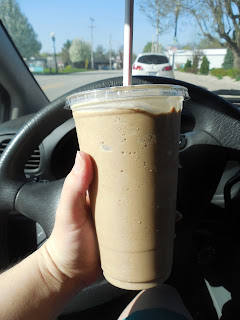 Hot, iced, blended - this is the best chai I've ever had. Travis and I just discovered this coffee shop and we love it. It's delicious. If you're in Morton, IL - pumpkin capitol of the world - do yourself a favor and get one.


#4 - The first batch of fresh asparagus from our garden. Holy schmoly - fresh, tender, yummy asparagus picked by my husband and daughter - the best. Everyone loved them and the 12 spears were not enough.

She waddles. I waddle. We both waddle. Except my hands are usually on my lower back/hips/whatever is near that I can lean on for extra support.


#6 - Okay, I'm cheating a little bit and adding this one to the mix. OSF St. Francis Hospital / Children's Hospital of Illinois.  I hope you've all seen the awesome news about the 2 year old girl who was born without a windpipe but just had successful surgery at OSF (as us locals call it) for a transplant that included her own adult stem cells.  I loved this part of the Huffington Post article:

Hannah's parents had read about Dr. Paolo Macchiarini's success using stem-cell based tracheas but couldn't afford to pay for the operation at his center, the Karolinska Institute in Stockholm. So Dr. Mark Holterman helped the family arrange to have the procedure at his Peoria hospital, bringing in Macchiarini to lead the operation. Children's Hospital waived the cost, likely hundreds of thousands of dollars, Holterman said.
Part of OSF Saint Francis Medical Center, the Roman Catholic hospital considers the operation part of their mission to provide charity care, but also views it as a way to champion a type of stem-cell therapy that doesn't involve human embryos, the surgeons said. The Catholic church opposes using stem cells derived from human embryos in research or treatment. [emphasis mine]
OSF really is a great hospital. It's where JF's alleged miracle happened and where he spent 7 weeks in the NICU. There's a crucifix in every. single. room. There's daily Mass in the chapel. There's a beautiful adoration chapel, separate from the main chapel, that is open 24/7 and is located in a high-traffic area of the hospital. The nuns who run it are serious about their mission and completely orthodox. The doctors, nurses, therapists, techs and so on are encouraged to pray over their patients. It is a St. Jude affiliate and its Children's Hospital is the best in the world for several treatments. And from personal experience I can tell you that the people in billing are very kind, easy to work with, and helpful when it comes to applying for charity and payment plans. At this house we love OSF.
- May 01, 2013