I'm calling this the cheater's edition because while the outfit below is what I wore Sunday it's not what I wore to Mass.

Recently we discovered that the kids do so much better at the Vigil Mass on Saturday and so we've been doing that the last few weekends. Saturday I wore the same old cardigan, scarf, shoes, and dress I've been wearing for awhile - perhaps a new outfit but the same pieces just rearranged in a new way.

Sunday, however, we celebrated L's 5th birthday and I wore this outfit: 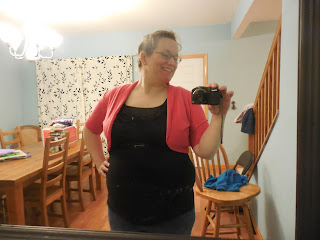 And now I ask you: Belt or no belt? You can barely see it - a black belt on a black shirt - but its buckle is gleaming a wee bit at the top of my belly.

Travis said I should lose the belt. I tried to explain that it accentuated my waist, which has recently moved north a few inches and that it was a trend. He said he'd seen some of his students do it but he just doesn't like the look.

I wore it anyway, obviously.

So let's take a vote. Who was right? Travis or Bonnie. No vote = you side with Travis and you're just afraid to tell me I looked stupid at my daughter's birthday party. ;) 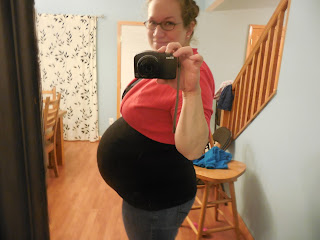 Thanks to Mandi at Messy Wife, Blessed Life for hosting this week! And happy wedding weekend to Emily at FLAP!
- May 06, 2013

Email ThisBlogThis!Share to TwitterShare to FacebookShare to Pinterest
Labels: what I wore Sunday