In high school I never knew what in the world this song was about but - thank you, Wikipedia! - now I know it is not about drugs. I guess I'm pretty sheltered or innocent or both but I was fairly certain someone was snorting a brimful of asher off a 45 record. And I thought "that's a good way to ruin a record" but no vinyl was actually hurt in the making of this song. whew.

And in case you don't want to click on the link, Asha (not Asher) is the first name of a Bollywood singer/back up dancer who would record vocals for lead actresses who could act but not sing.

Gosh I just love this movie. Gene Kelly - wasn't he dreamy? And look at Debbie Reynolds - she had no idea she'd grow up to be Princess Leia's mom.


3 - For the Solemnity of the Sacred Heart we attended Mass at Sacred Heart Church in downtown Peoria. A few years ago they renovated the building and it is gorgeous. 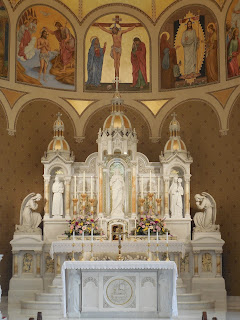 The frescoes above and around the altar show all the major events in the life of Christ. Above the side altars, and adding to the story, are frescoes of the Annunciation and Pentecost on the far left and right, respectively. 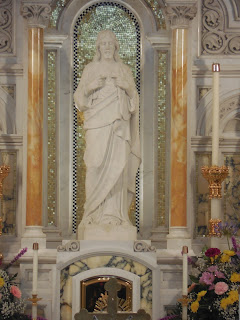 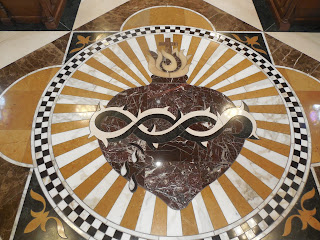 We also had a Sacred Heart pizza for supper. 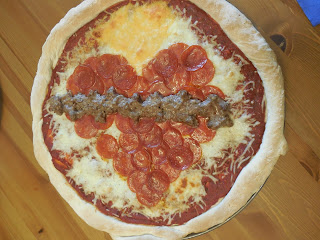 So if this looked like a parenting WIN, rest assured, it was like a 50%.
Lord, have mercy.

4 - Now I'd like to offer a translation of the above for my non-Catholic readers:

For the Solemnity (think: High Holy Day, super big feast day where we live it up because it's so important) of the Sacred Heart (Jesus' Heart. It is burning for love of us. His heart is bursting out of His chest He's so full of love for us. His love is sacrificial - often there is a cross at the top of it - and it brought about the Church - the water that gushes from where it was pierced.) we attended Mass at Sacred Heart Church in downtown Peoria. A few years ago they renovated the building and it is gorgeous. (Gorgeous and lavishly decorated to help us focus on God. Getting bored during the homily and your eyes start to wander? Boom: there's a picture of Jesus - look at it and meditate. Not paying attention and praying the Mass? Boom: there's a picture of the saints looking at you, saying, "Dude, this is important. Focus. Pray. I'll pray with you." Thinking about the errands you need to run instead of worshipping God? Boom: everywhere is something beautiful to remind you that God is Beauty, something lovely to remind you that God is Love, something majestic to remind you that God is King of Heaven and Earth.)

The frescoes above and around the altar (there's actually two altars - the table-like one in the front where Mass is celebrated and the Main or High Altar which is the tall beautiful one against the back wall. It houses the tabernacle - which is where consecrated hosts, aka the Eucharist, aka Jesus [John 6:25-68] are located.) show all the major events in the life of Christ. Above the side altars (not shown), and adding to the story, are frescoes of the Annunciation (When the angel told Mary she would bare the Son of God) and Pentecost (When the Holy Spirit came down on Mary, the Apostles, and others as they were gathered in the upper room, after Jesus had ascended back to Heaven.) on the far left and right, respectively.

We also had a Sacred Heart pizza for supper. (Catholics are weird, kitschy people sometimes. Maybe this seems tactless. I like to think that it's Jesus and Mary approved. Also, because it is ordinary time [not the Season of Christmas or Easter, Advent or Lent] in the liturgical calendar we try to follow the suggestion of the Church and have meatless meals on Fridays. [It's a obligation during Lent and a suggestion during the rest of non-celebratory seasons.] So it was a big deal to have pepperoni and sausage on our Friday night pizza, but that's what feasting on a solemnity looks like, yo.)

So if this looked like a parenting WIN, rest assured, it was like a 50%. (This is not Catholic guilt, it's just me realizing that I need to spend as much time planning and executing teaching moments as I do actually teaching in those moments.)
Lord, have mercy. (I'll get it right next time, God. Please be patient with me.)


5 - So that was really long. This will be short:
Children of mine, please understand the following: 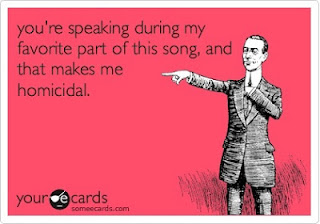 6 - Let's go back to Sacred Heart Church, shall we. I took a bunch of pictures of how beautiful it is, but one of the things I think is most awesome is that the side walls have huge frescoes of modern saints. 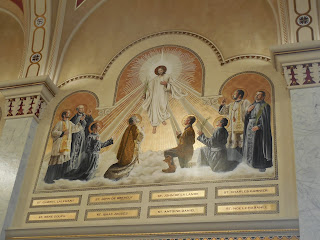 You want the North American martyrs.
Say hello to Isaac Jogues and friends. 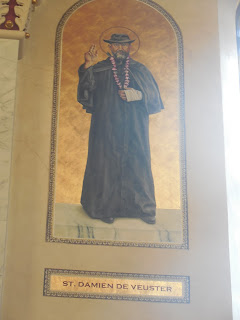 You want St. Damien, the man who moved to a leper colony in Hawaii so he could serve the people there and eventually succumbed to the disease himself?
Well, there he is. 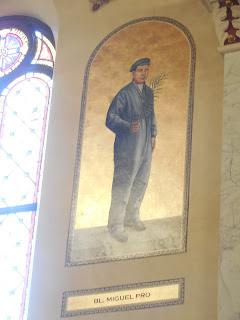 What about Miguel Pro, a Mexican priest who disguised himself as a mechanic while the Catholic Church was persecuted? Yeah, the guy who shouted out "Viva Cristo Rey!" as the firing squad killed him for his faith?
Representin'. 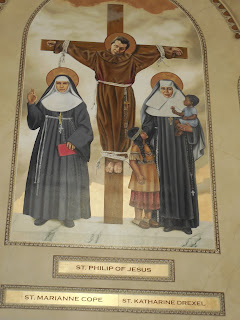 You want Katherine Drexel and Marianne Cope and Philip of Jesus?
Well, look who came to the party. 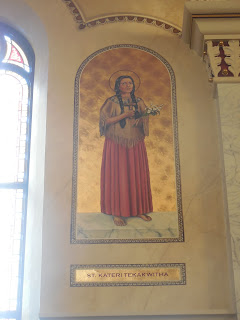 Kateri Tekawitha - the Lily of the Mohawks?
Present! 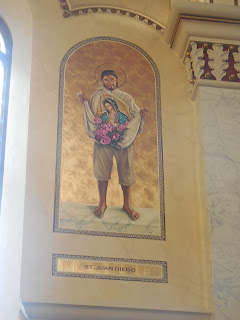 And what about the man who gave us the image of Our Lady of Guadalupe - Juan Diego himself?
There he is: holdin' his tilma.

Seriously, except for the fact that about 1/3 of the regular daily Mass attendees at this church do not appreciate babies and little children at Mass, I love this church.


7 - So without being called out by name I was pretty much called out for recommending the movie Silver Lining Playbook.

"But if you like movies with nudity and language and disturbing implied violence and described aberrant sexual behavior and onscreen sexual activity and the breakdown not only of one man's marriage but of his deeply held belief in the sanctity of marriage itself, then you probably shouldn't keep reading, because there are going to be spoilers."

So if you can't tell, Kendra did not like it and thought it was smut.

In defense of myself I will say that I only recommended the movie to people who like the show New Girl. That show has way too much sex and sexual humor (two things I dislike) and the humor is quirky (one thing I love about it) so obviously it's not gonna be everyone's cup of tea. Which is probably everyone who watched Silver Lining Playbook and hated it.

I really do need to apologize though for one thing I did say - which was that there are no sex scenes in the movie. As Kendra and her commenters point out there is a sex scene that shows an adulterous couple being confronted by the character who is being cheated on. Honestly the scene didn't bother me because it wasn't titillating, what they were doing was obviously wrong (adultery), and it ended in a violent confrontation between the two men. That's the impression it left on me - as a confrontation - and when I said there were no sex scenes I honestly didn't even remember the adultery. There was not a sex scene in that the main characters didn't jump into bed together - which is what I was applauding. But I'm really sorry that I got that so wrong and I apologize to those who watched the movie and then were scandalized in part because of what I said.

As for the rest of what Kendra mentions in the above quote - well most of that was what I was talking about when I said, "I like that it shows how people do stupid, dangerous things when we're in a bad place." I definitely understand her perspective and I'm glad she gave it, but I still feel the same way.

But if you watched the movie because I said it was good and then you hated it, I'm sorry you wasted your time and possibly your money. And I sincerely hope I didn't scandalize anyone.