1 - If I had money I would actually buy this album when it drops next week. I love me some The Head and the Heart.

2 - For those of you who watched and enjoyed The Lizzie Bennet Diaries you'll be happy to know the same team has done a series called Emma Approved. I'll be saving them up so I can plow through them all at once.

3 - Since it's October I was craving fallish things. The weather hasn't been cooperating so I had to take matters into my own hands and make something pumpkin-y. Pinterest came to my aid and I made Joyful Momma's Kitchen's pumpkin scones with a maple glaze. They were delicious! Make some right now.

4 - So.... The Walking Dead... I just buzzed my way through the whole of season 3 so that I can... I don't know, wait another year until season 4 is on Netflix. I know what you're thinking. "Hey Bonnie, do you really think you should be watching that show any more? Remember how you couldn't concentrate enough to even pump gas because you became so preoccupied by the zombie apocalypse? You could barely even sleep at night you were so scared and worried about what you would do and how you would save your children in a world full of walkers. What are you doing?"

And my answer:
Yes, it is true that I do keep a pair of knitting needles in my car so I can stab a zombie in the eye should the world ever come to that. However! The show The Walking Dead has become much more about the survivors than the zombies and I'm interested in those characters. Especially Herschel and Darryl - I love those two men. Plus, Woodbury and the prison are not locations similar to my life so it seems more like pretend. (What?! It is pretend you say?! Well I say I will be prepared because I am taking all kinds of mental notes, friends!) When Rick, Glenn, Carol and the rest were on the run, holed up in homes and the farm, driving through the country or city and passing all kinds of walkers, well, that was just a little too close to my imagined reality and it freaked me out a bit.

And then there's this: 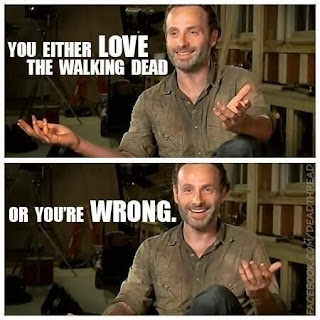 5 - It's funny the things you celebrate when you're a parent. For example: JP had become a little backed up. A week and a half ago he had a poopy diaper and then nothing but a couple of sharts for the next week. He was super fussy and I was super confused because he's only getting breastmilk - what is there to constipate him? Anyways, the doctor said to give him 1-2 teaspoons of prune juice a day until he had a BM. Three teaspoons later and JP pooped! It was at dinner and we all cheered. The next morning he pooped again and I called my husband to tell him. The next day he pooped again and my mom and I applauded. 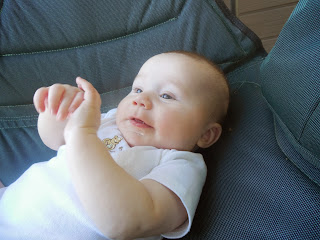 And now I think he has allergies like his brothers so boo to constricted diets but yay to pooping, happy babies!

6 - Speaking of pooping, happy babies.: A HUGE congrats to my friend Kathryn! She's pregnant with her 6th baby and I'm so happy for her. If you haven't yet, head on over and read all about her exciting news. And then, even though she hasn't said it, please say a prayer for her, her husband Scott, and their new baby. Their baby #5 was a NICU baby and I know that once you experience the NICU you are forever afraid of it.

Kathryn, I'm praying for peace in your and Scott's hearts and for a healthy baby. Also, I'm hoping for a girl.

7 - Yesterday the kids and I were driving to the grocery store in a neighboring town called Washington. L, who is learning Spanish at school, asked me how one says "Washington" in espanol. I explained that you would just say "Washington" because it doesn't translate. Ben then said, "Washington. HEY!!! I just spoke SPANISH!!" He was so proud and excited -it was awesome.