Today's guest post comes from Kelly at This Ain't the Lyceum. Along with having a son named Fulton (that's him huddled on her lap in the picture below) Kelly is also the winner of "Best Underappreciated Blog" from the 2013 Sheenazing Awards, so she's obviously already got tons of Sheen cred.

Kelly is a homeschooling mom of 5. She and her husband enjoy beer, bacon, and life in New Jersey. Her blog is hilarious and she takes the best pictures in all of blogistan.

ALSO! Kelly is celebrating her 35th birthday by running seven 5Ks to raise awareness and money for Spinal Muscular Atrophy. Two of Kelly's boys have SMA so it's a cause close to her heart. If you would like to support Kelly (maybe as a special Advent alms?) you can read more and donate here.
(PS - Kelly didn't ask me to do that, I just wanted to.) Although it is hard to imagine today, Advent has always been a mini-Lent. A time of fasting and preparation for the Feast of the Nativity. However, the Church has thoughtfully arranged a number of feast days throughout December to keep the excitement building and give reason to celebrate during an otherwise cold and dreary month.

Mixed amongst the more familiar feasts of St. Nicholas and St. Lucy is a unofficial feast which my family has taken to observing; December 9th, the day of Venerable Archbishop Fulton Sheen’s death. Traditionally, when saints are canonized, their feast day is instituted on the anniversary of their death, or birth into eternal life. Although he is not yet an official saint, our family has great devotion to Sheen. He has left behind a plethora of written and recorded work, some of which is perfect for incorporating into Advent and Christmastide. Plus, his American roots make a pilgrimage a viable option for many.

But what Sheen is most known for, amongst Catholics and non-Catholics, is his popular radio show, TV show and numerous books and articles. Many of these talks and articles are accessible to even young children. Listening or reading them aloud on December 9th is a great way to introduce your family to this “loyal son of the Church.”

‘The True Meaning of Christmas’ is a wonderful picture book our family enjoys. 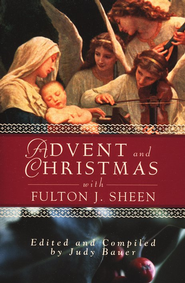 ‘Advent and Christmas with Fulton J. Sheen’, edited and compiled by Judy Bauer. With daily reflections, Sheen can lead your family through Advent and up to Candlemas.

Free talks by Sheen can be found at  http://www.bishopsheen.excerptsofinri.com/. None of these talks are specific to Christmas but provide solid background in the Catholic faith.

An extensive list of Sheen’s radio talks are available for purchase at fultonsheen.com as mp3s or as an ap for iPhones or on android.

On YouTube, a quick search for Fulton Sheen Christmas will bring up several clips from his long running ‘Life Is Worth Living’ TV show. The series ‘Sawdust Brains’ is about Christmas. You’ll have to watch to find out what he’s talking about.

The Archbishop Fulton Sheen Foundation has also released a one hour movie, “Archbishop Fulton J. Sheen; Servant of All”, featuring interviews, pictures and video. There’s even information on how to arrange a showing of the movie for your parish or other group. Why not make a December 9th a social event with a movie showing, popcorn and a discussion afterwards?

In Peoria, his hometown, there is now a new museum where you can view the vestments he wore at St. Patrick’s, the crucifix that hung on his TV set and many other artifacts. If you visit, be sure to get the Sheen coloring book and holy card. With prior arrangement, a tour of the cathedral, which is a short walk away, can be arranged. (You may also request the coloring book by mail, The Archbishop Fulton John Sheen Foundation, 419 NE Madison Ave, Peoria, IL 61603, or via email info@sheencause.org.)

If you are closer to the Big Apple, Sheen is interned in the crypt under the main altar at St. Patrick’s Cathedral in Manhattan. There is a kneeler at the top of the steps to the crypt where you can pray. Special arrangements need to be made to visit the tomb directly. (Contact the Director of Volunteers and Cathedral Tours  at 212.355.2749 ext. 829.) 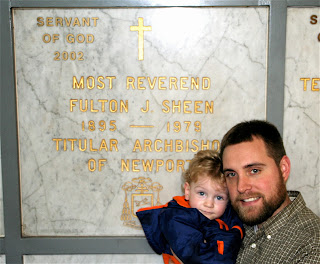 If you’re the crafty sort, Katie at ‘Look To Him and Be Radiant’ has a great tutorial on a Fulton Sheen lapbook.  In fact she’s got a whole page of information including coloring pages and a curriculum she’s designed to teach children about ‘her friend Fulton.’

Often, saints have particular meals or libations assigned to celebrations of their feast. But according to Sheen’s niece in this wonderful article, Sheen had stomach trouble since childhood and didn’t eat much. But in honor of his NYC resting place, perhaps a bagel, Coney Island hotdog or bowl of Manhattan clam chowder? Or maybe a bright red marinara or wine in honor of his famous cape. But one things for sure, don’t serve chicken.  (Read Sheen’s niece to find out why.)

So between the Jesse tree ornaments and St. Lucy buns, I invite you to make time for one of the 20th centuries greatest Catholics. Sheen has made it easy for us by leaving so much wonderful material to pull from. Be the first generation to celebrate what will hopefully become as widely loved a feast as any in December.

And now please join me in praying the second day of novena for Sheen's canonization.Novena Day 3
“In every friendship hearts grow and entwine themselves together, so that the two hearts seem to make only one heart with only a common thought. That is why separation is so painful; it is not so much two hearts separating, but one being torn asunder.” Archbishop Fulton J. Sheen

Prayer of Canonization, Our Father, Hail Mary, Glory Be

Prayer of CanonizationFather, source of all holiness, You raise up within the Church in every age men and women who serve with heroic love and dedication. You have blessed Your Church through the life and ministry of Your faithful servant, Archbishop Fulton J. Sheen. He has written and spoken well of Your Divine Son, Jesus Christ, and was a true instrument of the Holy Spirit in touching the hearts of countless people.If it be according to your Will, for the honor and glory of the Most Holy Trinity and for the salvation of souls, we ask You to move the Church to proclaim him a saint. We ask this prayer through Jesus Christ, our Lord. Amen
- December 03, 2013