Nominations are CLOSED for the 2014 Sheenazing Awards

I am no longer taking nominations for the second annual Sheenazing Awards.

Thank you to everyone who nominated your favorite blogs and bloggers! This year there were two times as many nominations as last year, which is so cool!

Voting for the Sheenazing Awards will begin mid-week.

Well folks, here it is: the nomination form for the second annual Sheenazing Awards!

The Sheenazing Blogger Awards are named for Venerable Fulton J. Sheen. Sheen was amazing at using the newest forms of media to communicate the beauty of the Catholic Church and his love of Christ to the world. I'm positive that Sheen would be a blogger were he alive today and that he is in Heaven, totally approving of this award.

The Rules:
1 - Nominations will only be taken for blogs written by Catholics who are faithful to the teachings of the Catholic Church and believe that Pope Francis is the true pope. Bloggers currently enrolled in RCIA are also eligible. The "Best Blog by a Non Papist" category is exempt from this rule.
2 - Nominations should include the blog title and URL if the title and address are not the same.
3 - You can nominate up to two (2) blogs in each category but you don't have to nominate any if you are unfamiliar with a certain category.
4 - You can nominate yourself - no one but you and God will know.
5 - This is for fun, so have fun!

I'll gather nominations through Friday. Over the weekend I will share with the bloggers that they have been nominated and official voting will then begin on Monday, the 20th . Each nominee will be provided with the following button to remind their readers to vote. 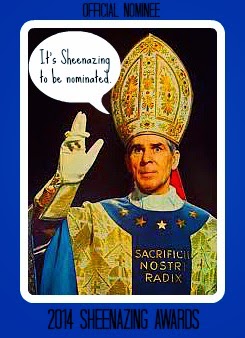 The winners will earn a firm virtual handshake, the pride in knowing that they've been named the Best of something by a fairly obscure blog, and the right to display the following on their site: 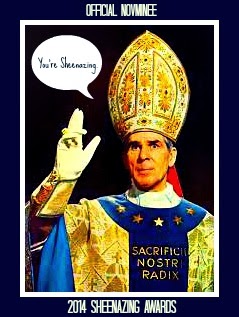 So go nominate the Coolest Blogger, the Smartest Blog, the Funniest Blog, and so on!
- January 13, 2014