Part II of From Muslim to Catholic: a conversion story

You can read Part I of Hafsa's conversion story here.

When I got into college, I was dumb, and rebellious and I fell away from religion completely. I went to parties and stayed out late and did really stupid things. I felt as if for the first time in my life, I had been accepted and my friends became the family I had never had. Being accepted meant drinking, and clubbing, for me. For the first time in my life, I had a social life, I had friends and no one was going to make me feel guilty for living my life. To me that was more important than having a relationship with God. I pulled myself farther away from God, my relationship had been severed and I didn't care. I only knew that I never wanted this artificial good feeling to end. The farther away I got from Him, the more depressed I got. The only thing that numbed it for the tiniest second was alcohol and pot. I would wake up the next morning and be furious with myself and think of course I need God, but then my cell phone would ring and I'd be at it again...off to another party. I began to question religion and God, because I thought, if God existed then where was he when my grammy died (my best friend), or when I was cowering in a closet praying that my brother wouldn't be in one of his violent moods and come to find me? I would sometimes get into long conversations/arguments about how stupid and unrealistic the idea of organized religion was with anyone that would listen. It was no longer anger projected at God, it was the supposed exclusivity of organized religion and the rules. Looking back I needed that family and those rules. And then the worst happened, my own mother betrayed me when she joined a Baptist church and came back into her Christian life. I grew even angrier and while not outright denying God, I just stopped thinking about him and stopped caring about right and wrong.

At 19 I met Marc, my future husband and he had the same ideology as I did. He was so much more intellectual with his arguments on the fallacy of religion. I began to engross myself in the ideologies of Nietszche, but he was too crazy even for me. Eventually I became a relativist and an agnostic. I began to think about religion and God again, but not in the true sense, I only thought about those things in order to further expound upon my reasons for thinking them outrageous, and I questioned hardcore.

The turning point came when I had been poking around in Marc's backpack trying to find a pencil and found C.S. Lewis's "Mere Christianity" and I got so angry at him, I threw the book across the room. My exact words were, "if you think we're raising our children to believe that organized religion garbage, you can forget it. My children will not be raised to believe lies." Eventually he calmed me down, and convinced me to read some of it and I fell in love with C.S. Lewis. Fell absolutely in love with his story. C.S. Lewis had fallen away from God and became an atheist until his friend J.R.R. Tolkien (a Catholic) brought him back to God and truth. Marc's intellectual arguments also changed from "what is truth?" to "there may not be truth without God." Over time that turned into "there is no suitable truth without the Church" Before that came we decided to try out the Protestant church and attended services every Sunday, but the complaints came. It didn't feel like enough to either of us, we weren't satisfied and we hungered for more truth, more absolute than what we had been given. I think my husband felt this way before I did, but we came into it together each of us pulling the other along when we would hit a roadblock and want to turn back the way we'd come. It is why I feel that God made him especially for me.

So we began to explore the local Catholic parishes around our city. Luckily my husband's stepfather was Catholic and so my husband was enrolled in a Catholic school from 6th grade to 8th grade, so he had a general understanding and knowledge of the mass. The first church we tried was a very beautiful church, but the people left something to be desired. It was a horrible first experience as there was a grandmother who sat behind us with her grandson who obviously didn't want to be there. He was making disgusting comments about everyone, including the priest. Looking back, it was almost as if the devil were in my ear discouraging me from continuing on this path. It almost worked. I told my husband I never wanted to go back, that the priest was cold and so were the parishioners. He convinced me to try one more parish, the same parish where he and his sister had attended school. It was still awkward, I actually brought my Bible! But for some reason, it felt more comfortable being there. Through this parish, we discovered RCIA and met some wonderful men and women who helped us on our faith journey. I had my first discussion with a kindly sister of Mercy. Her name was Sr. Juliana and she gave me my first rosary and introduced me to the most popular and well known devotion of Catholics. I remember coming home after a stressful day working at the Protestant preschool and sitting on my bed, praying the rosary.

During the months of RCIA, I found myself becoming increasingly uncomfortable with working at the Protestant preschool. One day I showed up to work early and met my co-teacher in our classroom. I shut the door and said, "I have to tell you something...I'm becoming Catholic." She widened her eyes but to my surprise she wasn't horrified. She asked me a ton of questions, can you guess what the first one was? She asked me if I was going to stop taking birth control! The funny thing is, when Marc and I first began discussing Catholicism back in August, we had already come to the decision that I would stop taking the pill, but that is a whole other fertility/faith story. After my coming out of the Catholic closet, things were okay but awkward. I had an interesting conversation with the director of the preschool one day as she was showing me how to make homemade playdough. The conversation began with her telling me that she used to be Catholic and that it was one day when she attended her first Billy Graham concert, that she was truly saved. I was so uncomfortable by that conversation that I called her on it that day. I told her I felt like she was implying because of my decision to convert to Catholicism, that I was not saved. She apologized but didn't really retract what she had said. Needless to say my career as a Protestant preschool teacher didn't last. By sheer coincidence, I was offered a job as a preschool lead teacher for the same Catholic school my husband had attended!

Through the RCIA process, we had ups and downs. Our faith was truly tested in many ways. One of them was the fact that since we were not married in the Church and neither of us had been baptized, our marriage was considered invalid. We essentially had to wait until we became Catholic to be intimate. This was a very difficult year as we were ready to start a family and we almost quit RCIA over it. We eventually knew there was nowhere else for us to go and so we continued on.

On Easter of 2008, we were baptized, and confirmed into the Catholic Church, the following Monday, our marriage was blessed with a full mass. Together for the third time in our lives, we received the holy Eucharist. The first time at the vigil mass, then on Sunday being the pious Catholics we are, we decided to attend Easter Sunday (our hearts were newly made and on fire!), and again on our Catholic wedding day. Together we kneeled before the priest and accepted the bonds of marriage. 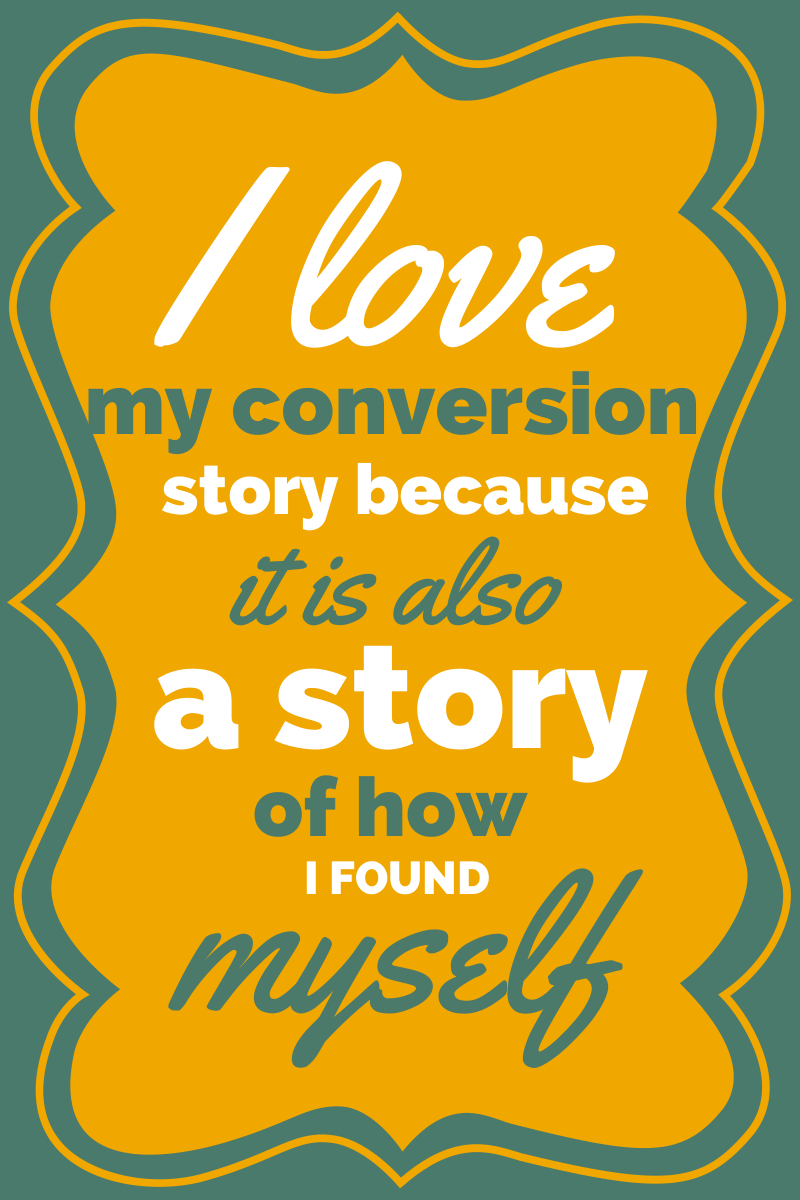 I love my conversion story because it is also a story of how I found myself. I had always been searching and seeking something. Isn't that always how we are led? Because there's an emptiness. I truly felt like there were so many incidences that were slowly leading me to Christ. Every Good Friday we watch "The Passion of the Christ" and every Good Friday, my heart remembers that night. The vigil, wearing a white robe, smelling the Chrism oil, hearing the choir sing the Litany of Saints. I get goosebumps. I am one of those crazy people that looks forward to the 40 days of Lent, because I know what it brings. Our souls have the chance to be reunited with our Lord, to remember all that He went through for us. All throughout the year I am drawn in so many different directions, I am drawn away from God. I am so thankful I'm here. I'm so thankful to have the Church in our lives.

I feel that Catholicism has made me feel whole, it has completed my quest for truth. It is so much more to me after having gone to the Tridentine Mass these last few days and seeing the reverence and the traditions that started it all. I want that for my children, I want them to see us genuflecting before we sit in our pew, and making the sign of the cross, I want them to hear the Latin and feel the power of consuming the body of Christ. I don't want them to wait 23 years until they find truth, I want them to live it their whole lives.
- March 06, 2014