We are sad, angry, and - quite frankly - scandalized to learn that the Sheen Foundation has no other choice but to shut down Fulton Sheen's cause for beatification and canonization.

We had every reason to hope that James' alleged miracle of being brought back to life and full health after being dead for over an hour would soon be approved by the Congregation for the Causes of Saints and then the Holy Father, thus allowing for Sheen's beatification to occur. We feel very strongly that James' story and the life and writings of Fulton Sheen contain an awesome potential to change hearts, bring souls to Christ, and glorify Almighty God. It is a shame that this good work has been brought to a standstill by the Archdiocese of New York.

And finally, I want to address Cardinal Dolan.
Cardinal Dolan, my husband and I have long been fans of yours - even since your days in Wisconsin. Because of how much we have loved, supported, and prayed for you we feel especially hurt. Your Eminence, years ago your diocese turned down the opportunity to put forth and promote this cause. The Diocese of Peoria has invested years of time, manpower, and money.  Please cooperate with the Sheen Foundation and Diocese of Peoria, and let us re-open the cause! I promise you that if you do (and Sheen is beatified in Peoria) you can have dinner in our home. My husband will grill you a fabulous steak and I will bake you some of my amazing chocolate chip cookies. 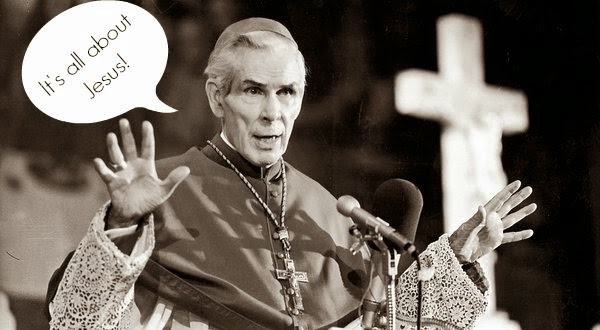 Updates:
Here's some articles from around the web.
Catholic News Agency spoke with the Roman postulator, Dr. Ambrosi..
Brandon Vogt has an anonymous source.
The Archdiocese of New York released a statement saying they await direction from Rome.
The original press release from Bishop Jenky and the Catholic Diocese of Peoria.
Aleteia has an article expressing how everyone's feeling: baffled.
National Catholic Register reads my blog.
More from the National Catholic Register.
The Eye of the Tiber takes their satirical spin on it, and it's really funny to boot!

*Catholic Answers has got all the Catholic answers regarding relics.