James' 4th Birthday and how it relates to Sheen's cause


I remember so much of his birth so vividly.

I remember how beautifully the labor went and I remember - so clearly - the pain as he descended and that horrible feeling I suspect all birthing moms feel: I don't want to do this and I have no way out.

"Bonnie," my midwife's birth assistant said in a firm doula voice, "you need to get that baby out. You need to do it now. You can do this and it's time to do it now." With her words I pushed James out. I remember feeling like I was in control. I gave birth to him slowly so that I wouldn't tear and I waited for my body to contract so I could work with it. I was in control.

And then I wasn't.

My midwife caught James and immediately handed him to me and he was completely lifeless.

As everyone moved around me, going into action, I sat back and shut down. I went into a state of shock and I watched all that control slip away completely.

When James was in the NICU we were told so many things about who and how James would be. The worst, though, was when his feeding therapist told me she didn't think he would probably ever eat. No birthday cake, ever, if he even ever had a birthday. I felt like she had taken away my last bit of normal and in private I sobbed for this changeling I'd been given.

As it turns out, though, she was right and James should never have birthday cake unless it is wheat, soy, dairy, nut, and egg free. But what a horrible cake that would be. Today he will take rice krispie treats (made with coconut oil instead of butter) to school for his class treat.

Today's birthday will be a little sad for me, as every day has been a little sad for me ever since Fulton Sheen's cause was stopped. The hope that James' coming back from the dead would lead to Sheen's beatification was just about the only reason I could look a grieving mother in the eye. She begged for her child's life and I am never more aware of what an undeserving jerk I am than when I stand beside her. With the cause stopped I feel a bit anxious, a bit sad, a bit found out.

It also makes me see that, once again, I am not in control.

Elizabeth Scalia wants Sheen to stay in New York because she thinks he'll penetrate through the crap that fills the East and bring about a revival. I usually like what Ms. Scalia writes but that just seemed to miss the obvious: they've had Sheen for over 80 years.

Rochester and New York City didn't care much for him when he was alive and no one has seemed to care very much about him since he died.

There's a new Sheen Center in NYC, which Cardinal Dolan dedicated yesterday, but it's website doesn't talk about Fulton Sheen at all. Pilgrims can't visit Sheen's tomb at St. Patrick's Cathedral without making special arrangements because he's locked up in the crypt. The Archdiocese's website doesn't even have him listed as Venerable. It seems that if they were excited about the man and his cause they would have at least updated that at some point in the last fifteen months. 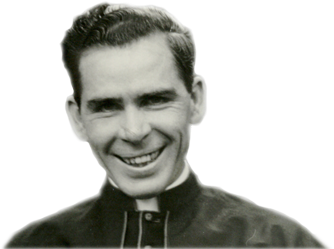 I miss that point, too, about it all coming down to God's will. I bristle when people say this pause in the cause is God's will. Maybe it is and maybe it isn't. This breakdown may not be God's will but I do know (and have to remind myself) that God makes all things work together for the good. He's in control, just like He was at James' birth, not me at all.

One of the only commentaries I've read on this whole mess that has brought me any sense of peace came from Crisis Magazine: Thank Goodness Fulton Sheen's Cause Has Been Suspended. I don't agree with everything he says but he is right to point out that Sheen's cult needs to thrive and spread.

Today is James' 4th birthday. By the end of the week I will post pictures from James' pirate themed birthday paaaarty, because really this is a mommy blog and I should get back to that.