Looking around our new home: the living and "dining" rooms

When we bought the house it looked like this: 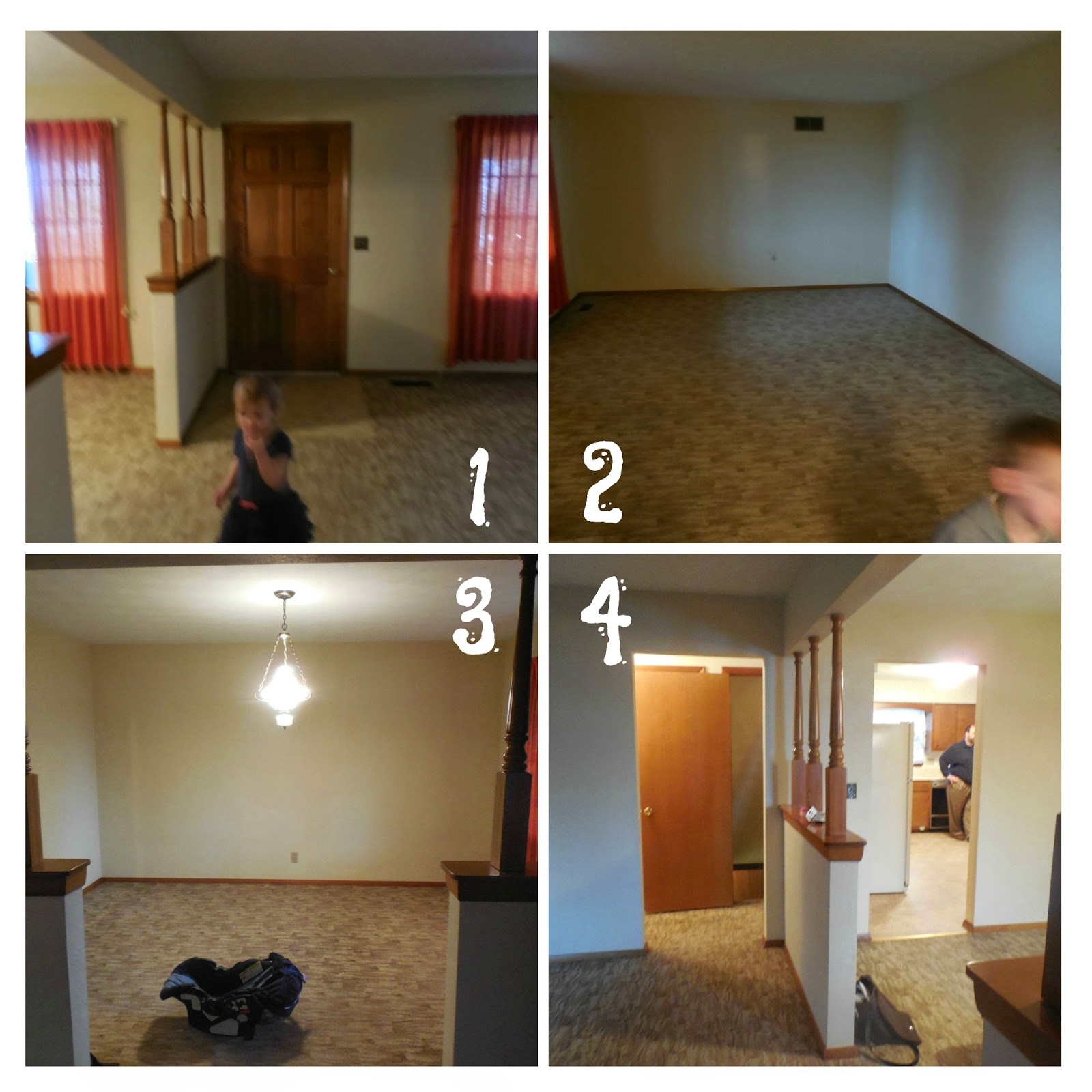 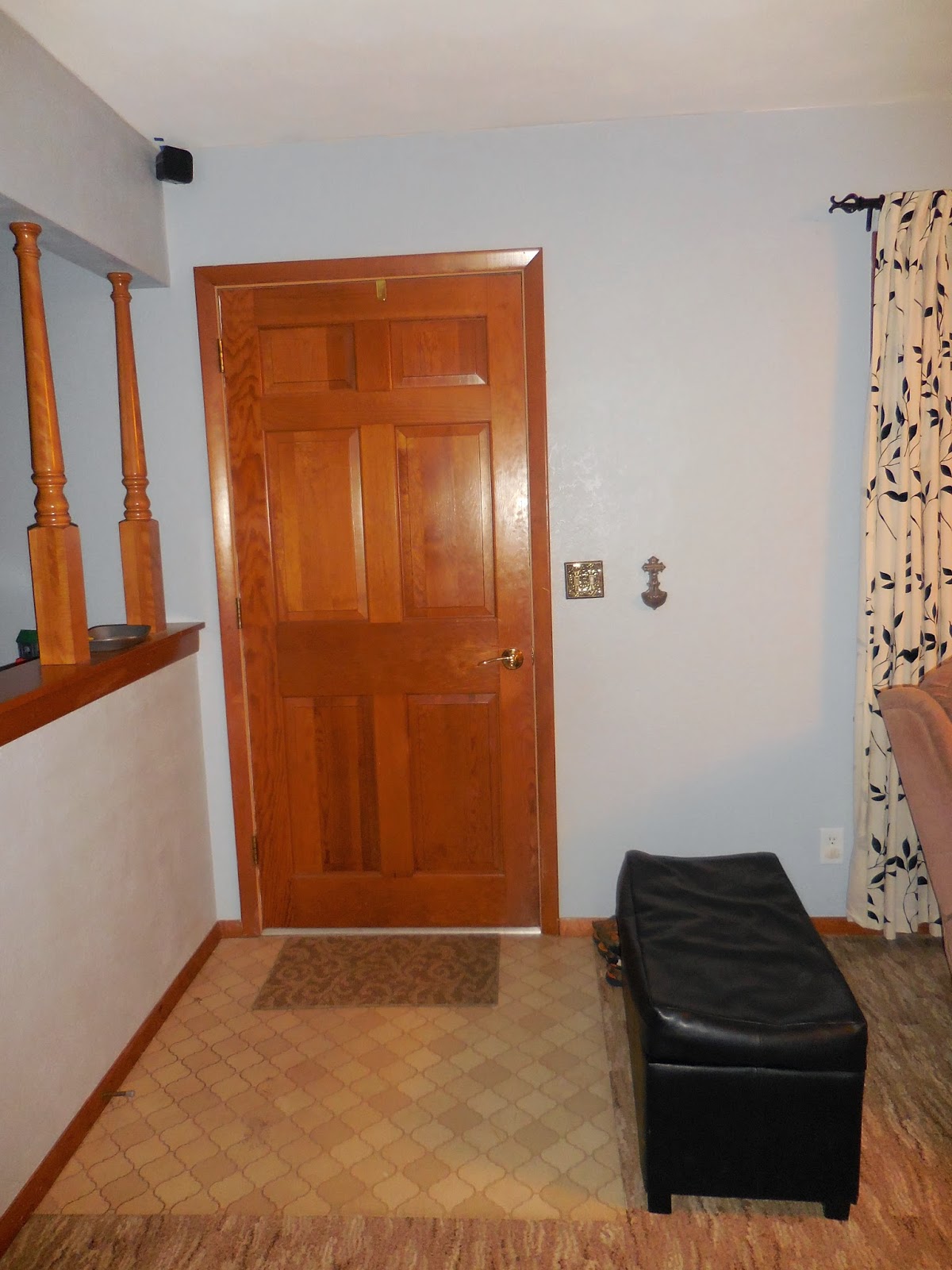 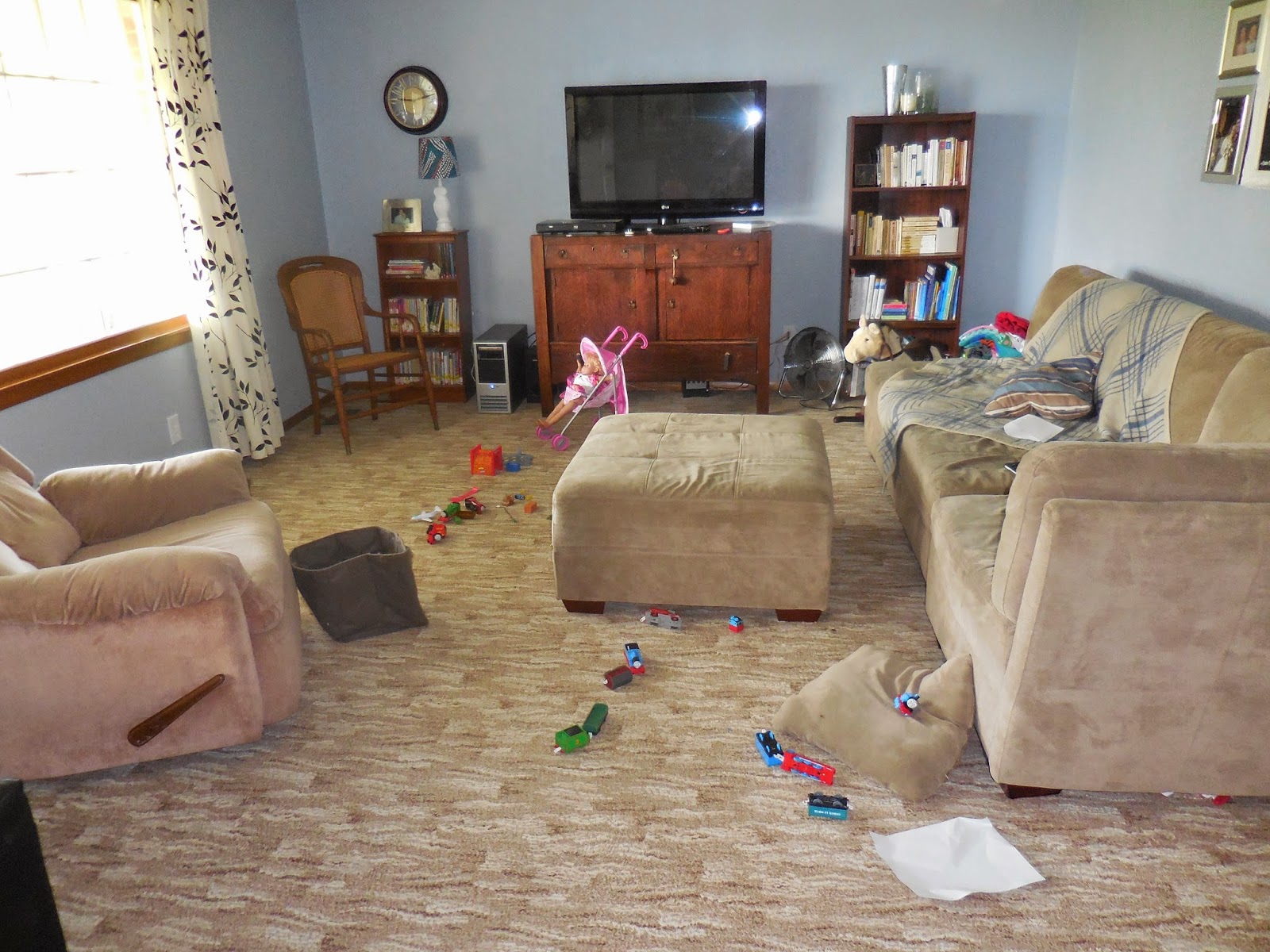 Actually it usually looks worse than that but we had just tidied it about ten minutes before so this is just the beginning of the downward spiral. 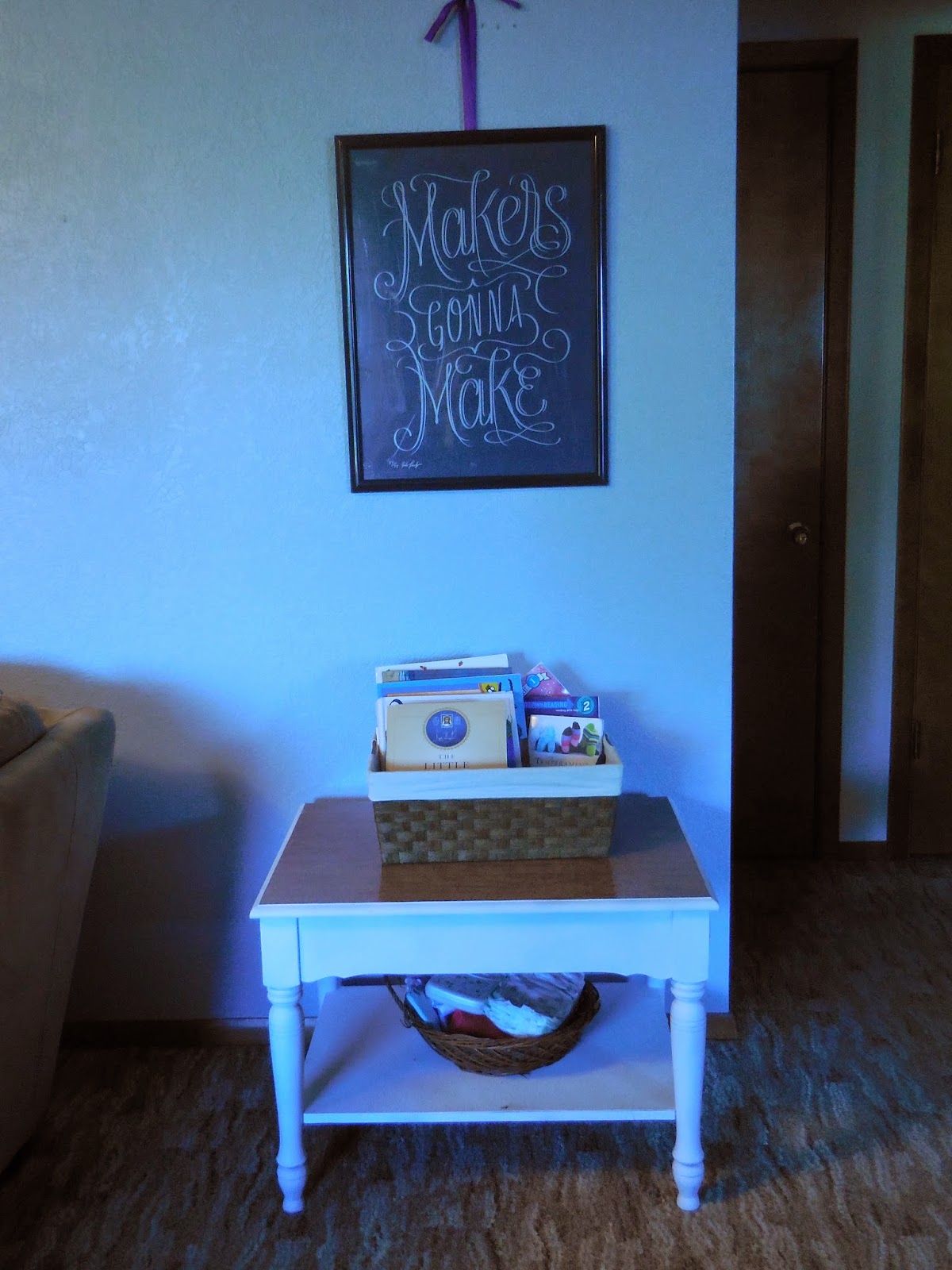 Now when you come into the home you're greeted by my no-longer-purple table with its book basket on top and basket of diaper changing supplies on the bottom. And that's a Jude Landry original hanging on the wall.

Next to it is the sofa, which is covered with the blanket from my college dorm days because you'd never want to sit on it with all the gross stains. Gross, grossity, gross, gross. Actually forget I said that because you won't ever want to come over and sit on my couch and visit. That blanket is there because it looks pretty. 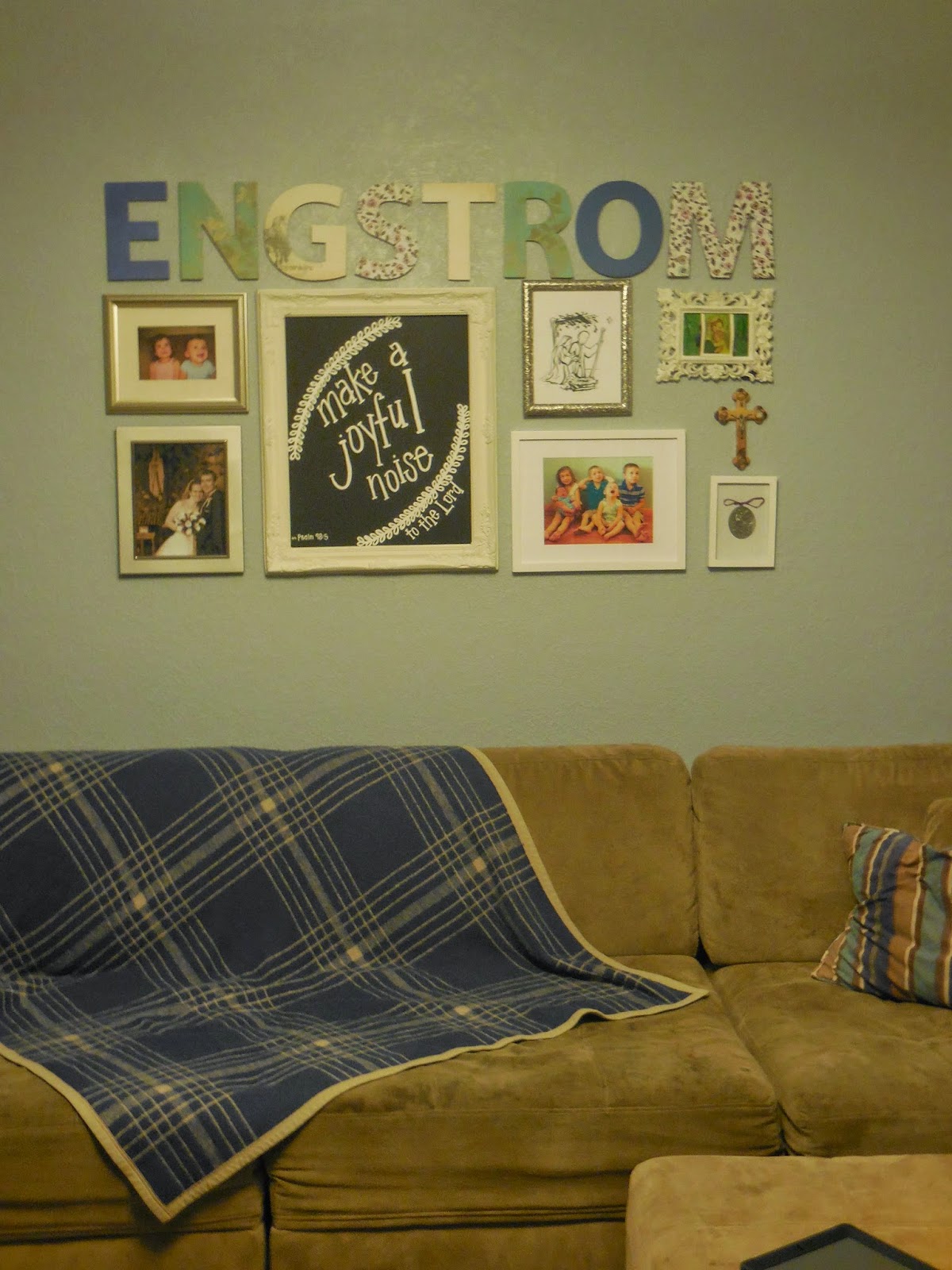 I love the gallery on the wall. This isn't quiet done, actually. When we have some more money I'm going to buy some white beadboard and white trim and have Travis assemble them so I can attach the letters on the framed beadboard. (Won't that be so cute?!) I've also swapped the black and white picture with the Holy Family print that was in the Edel swag bag. Plus I'll be adding a few more images, but only after the letters are framed so the rectangle is bigger, if you follow. 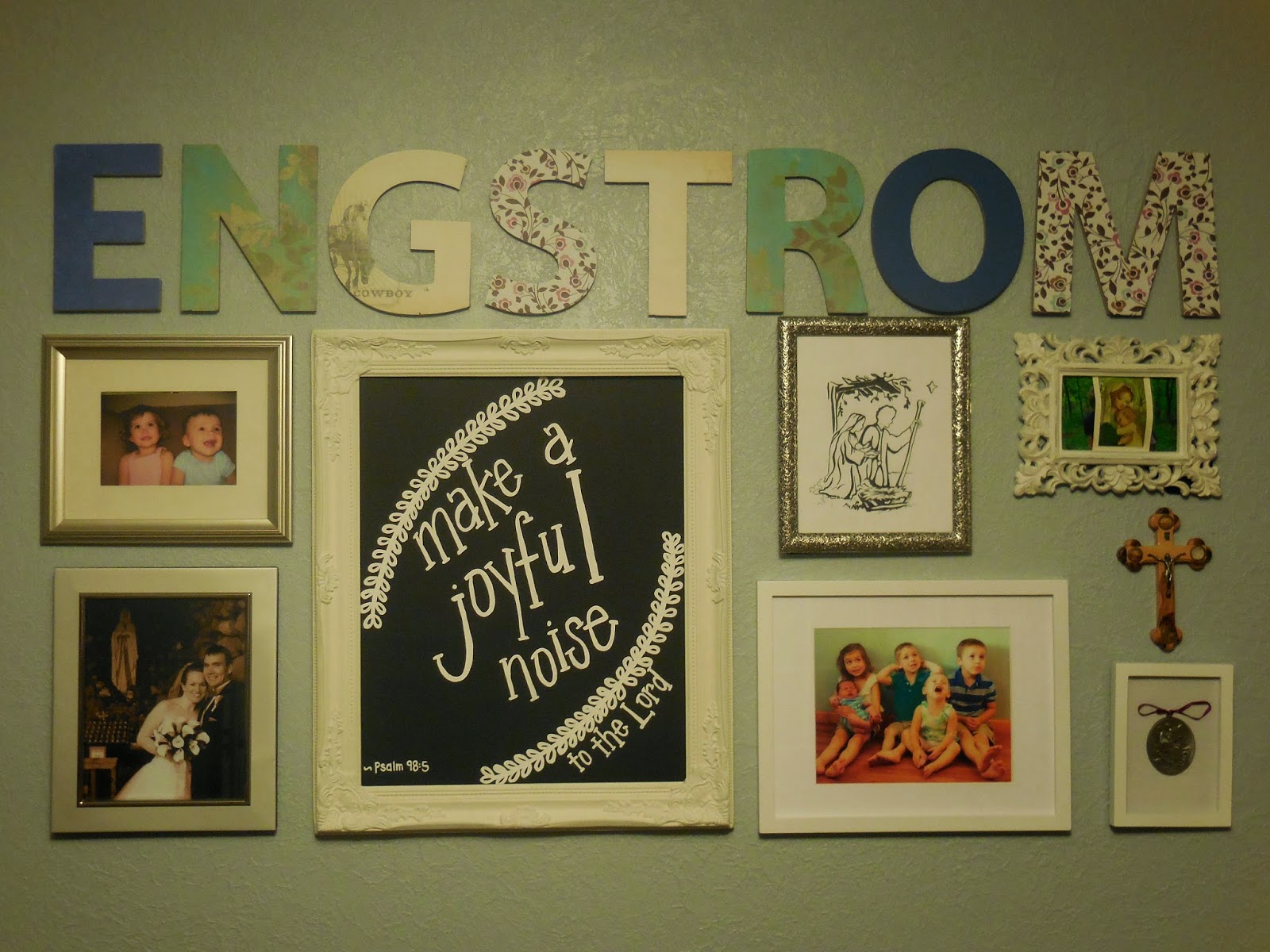 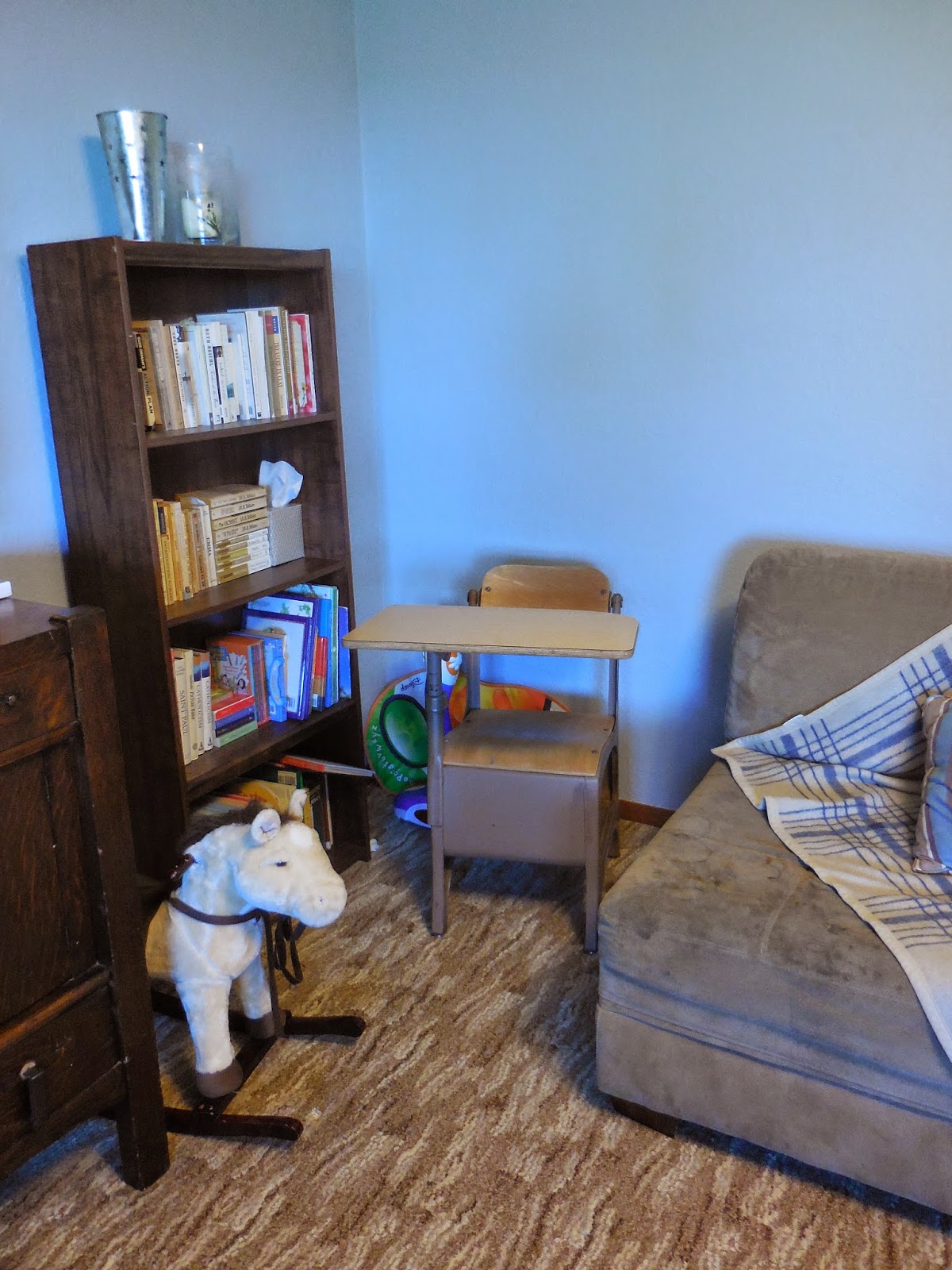 In the corner, on the right of the television are random things. The rocking horse, an old school desk I just picked up from church, and another bookshelf. 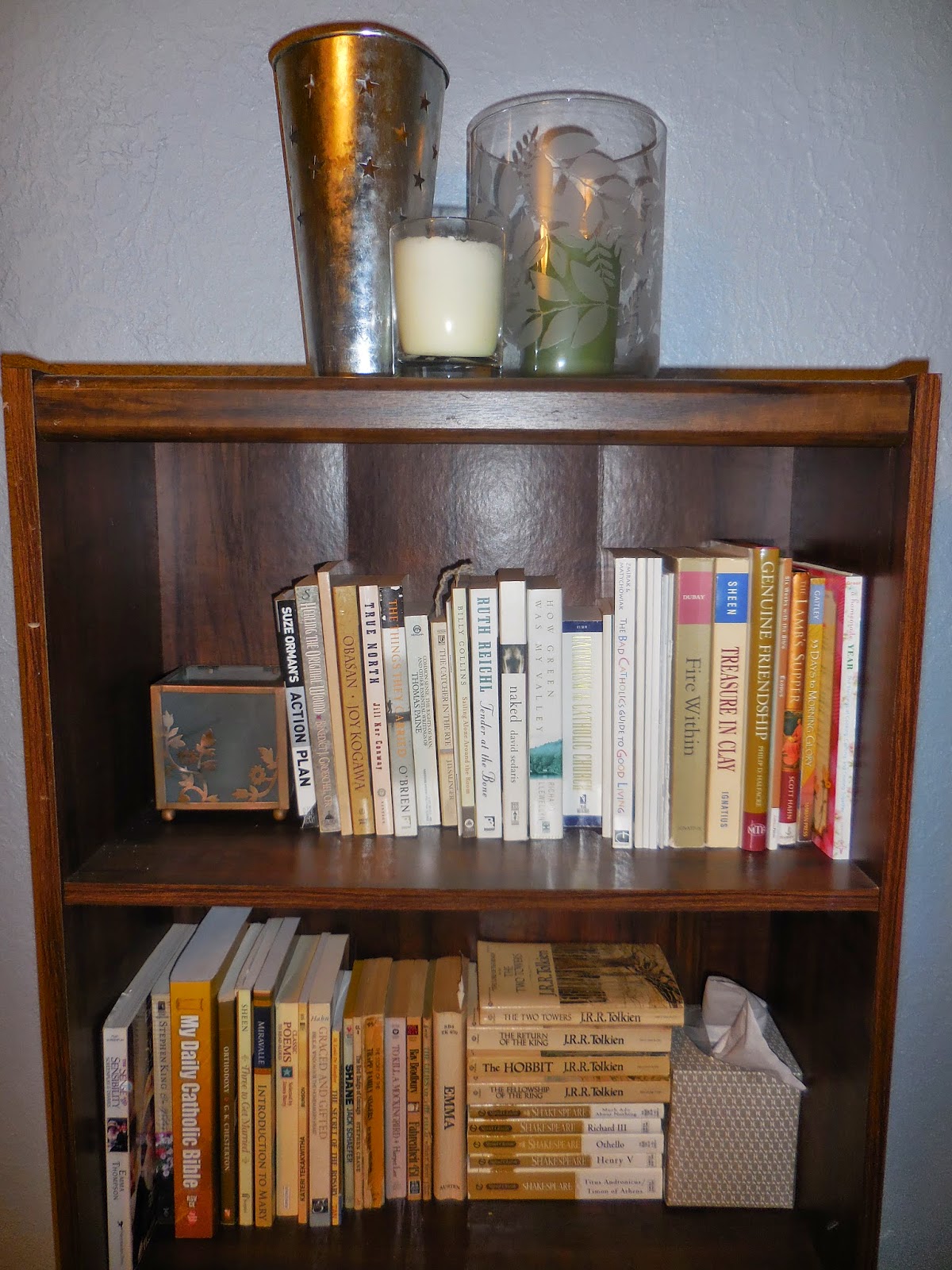 It's my white and cream colored books, with all the colored ones hanging out in another part of the house. You'll see that later.

Over in the corner by the window, to the left of the television, is a little reading nook. The owl lamp is from Wal Mart, the clock from a garage sale, and the chair was purchases at an estate sale and re-caned by my grandpa. 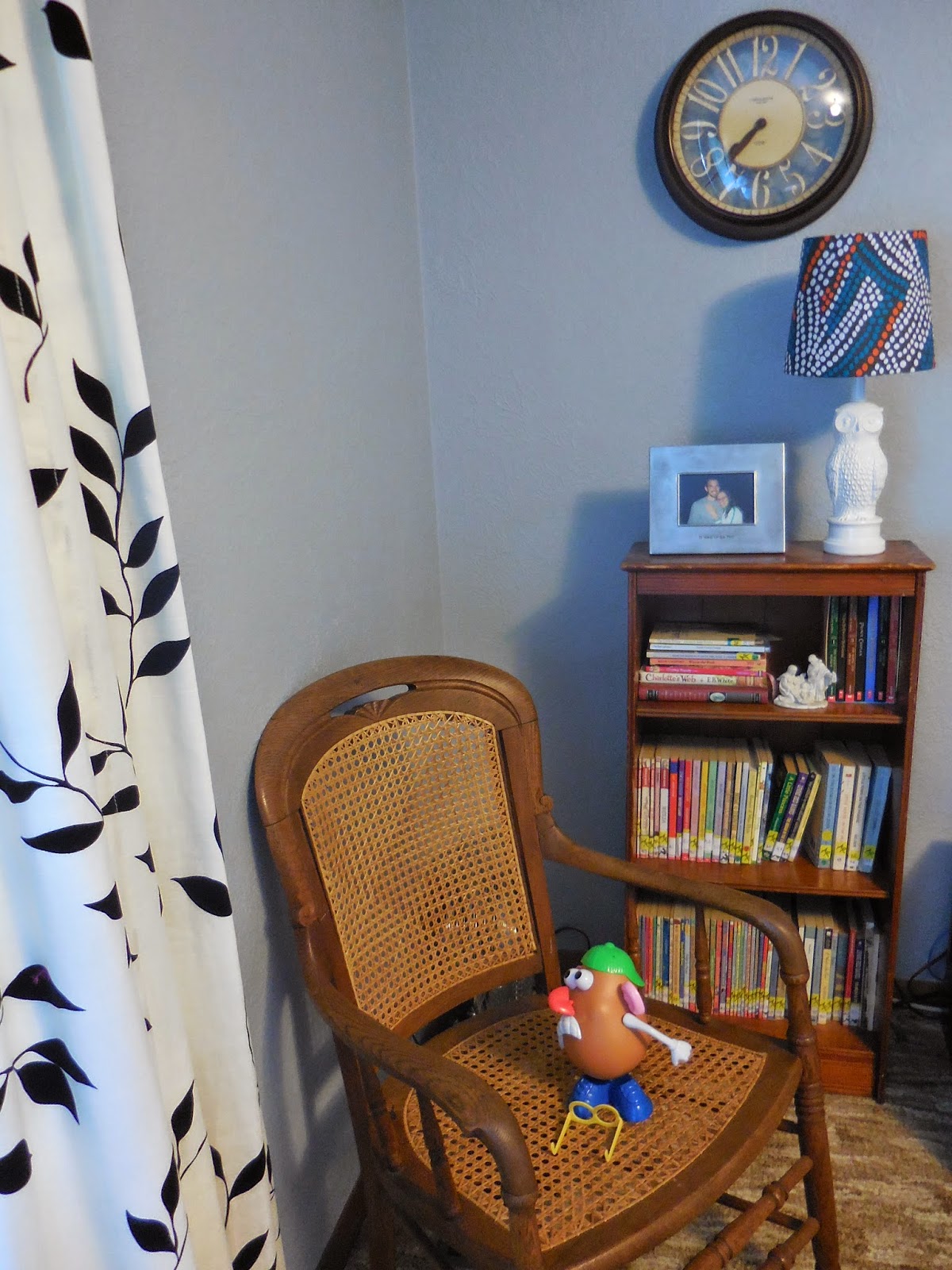 Here's the view of the living room from the playroom. Comfy cozy, right? 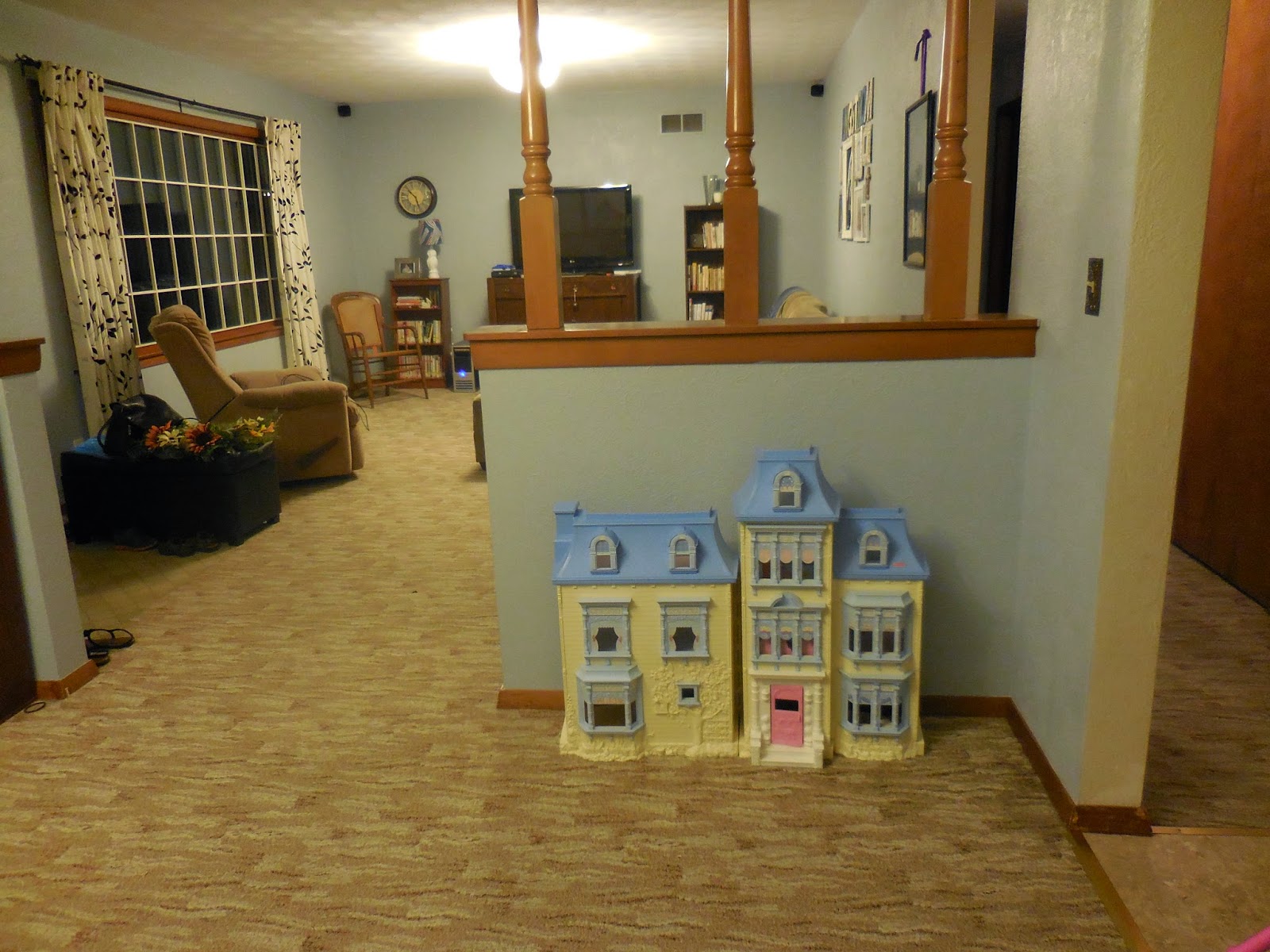 Now the playroom usually looks like this, usually a bit worse. Sometimes much, much worse. 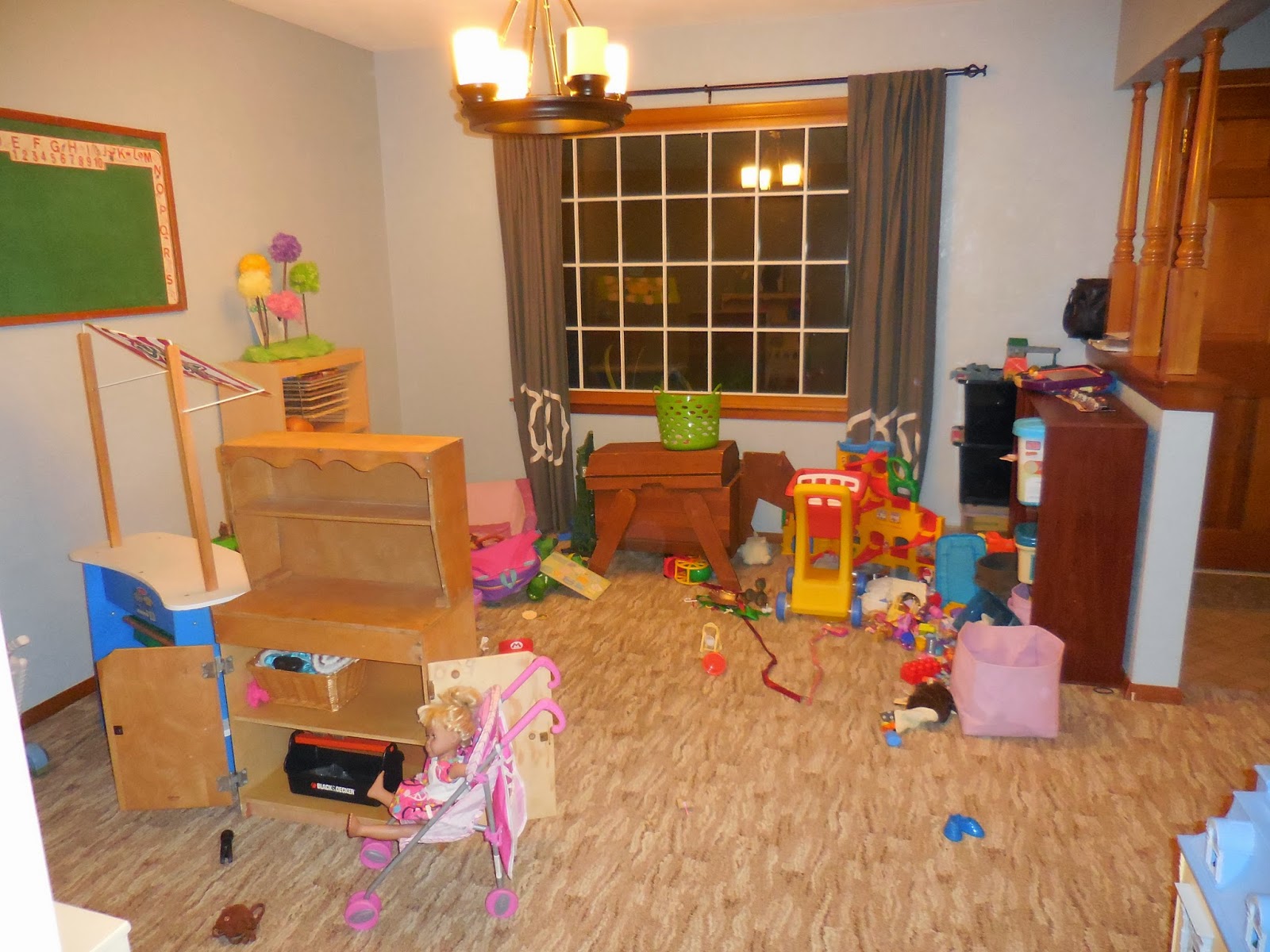 Gone is the hideous light fixture and orange curtains. 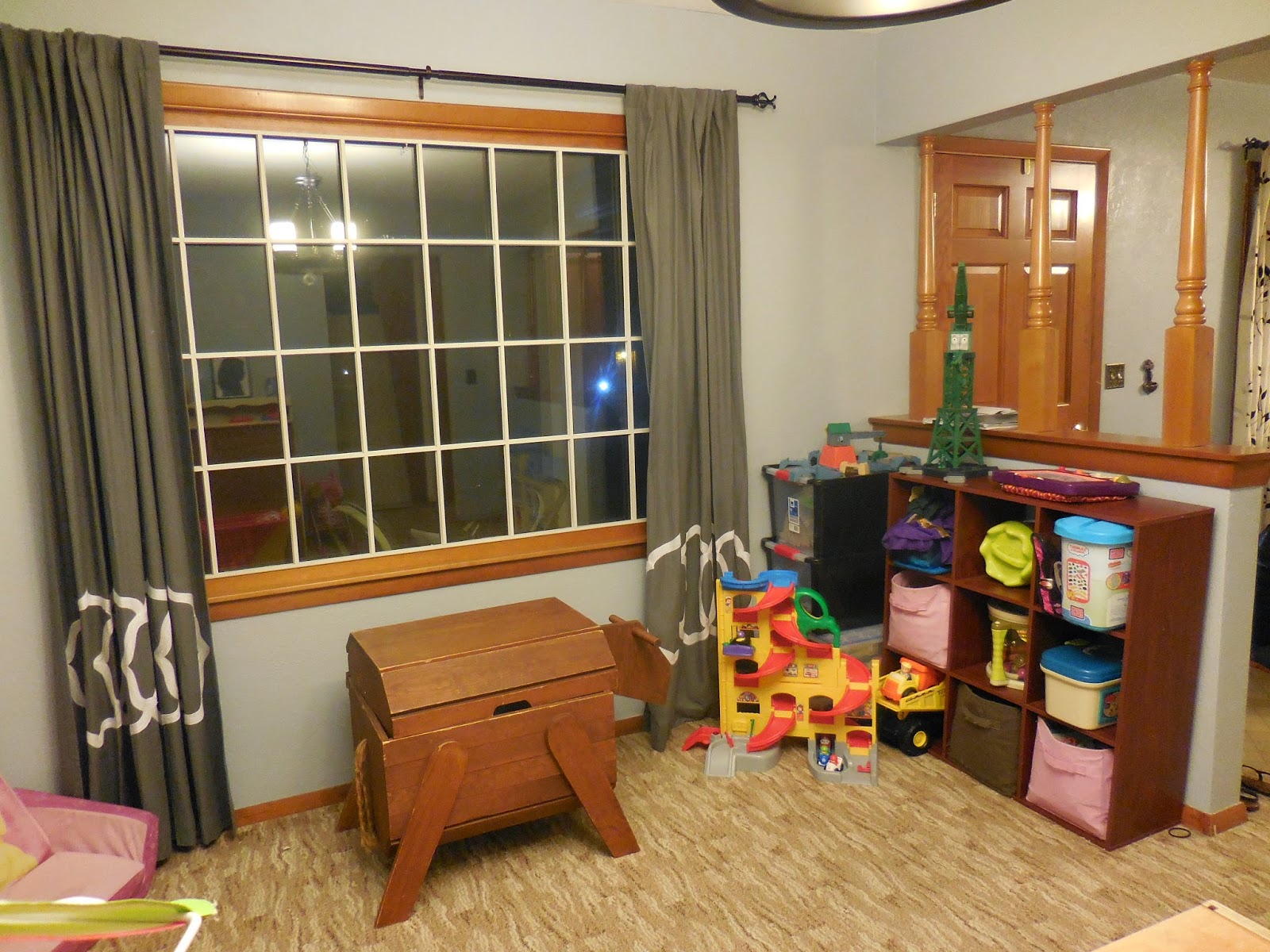 The cow-shaped toy box was made by my grandpa years ago. The cubby and curtains from Target. 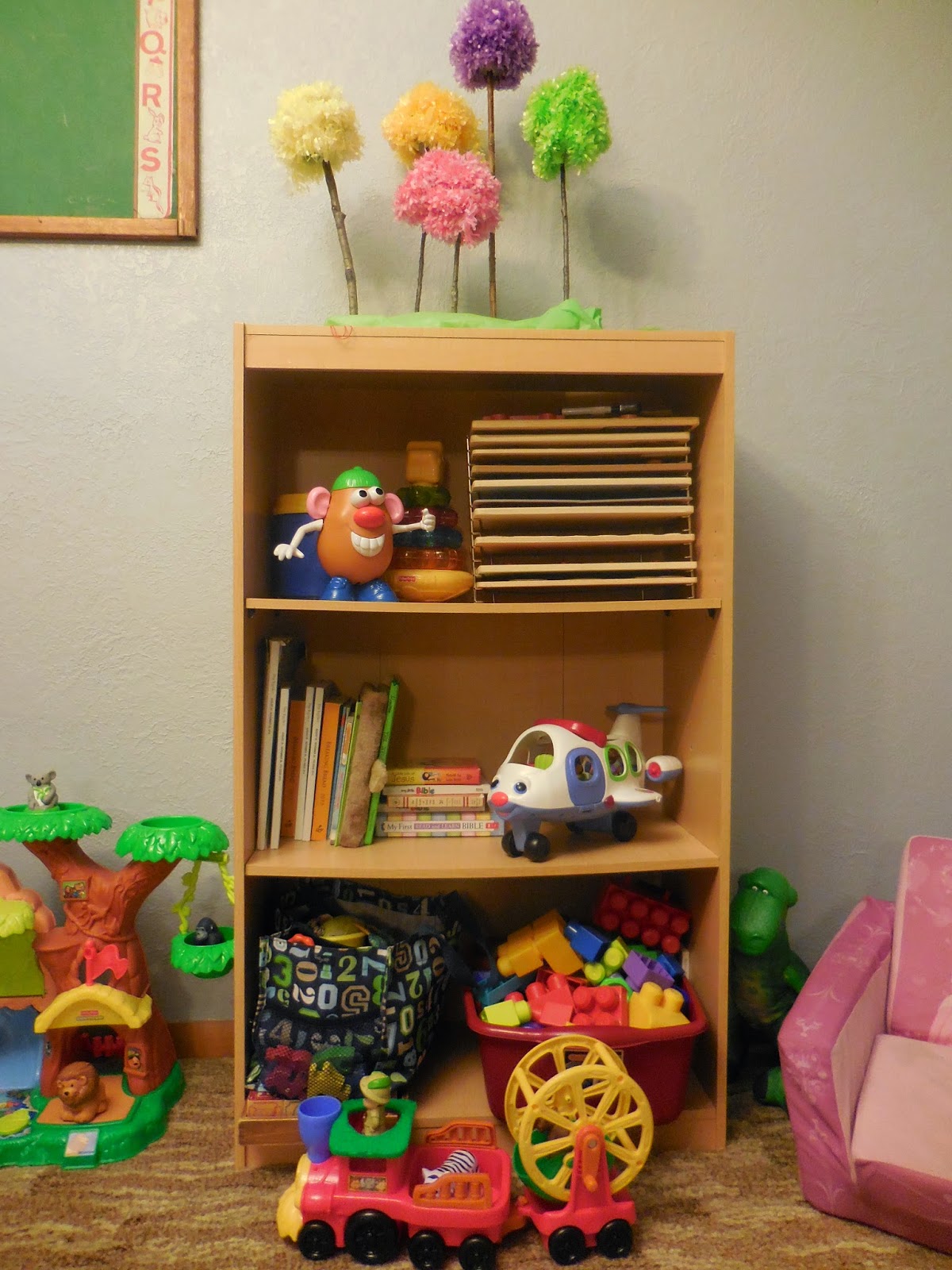 Against the wall is a cheap bookshelf with blocks, puzzles, books, truffula trees, and some Little People toys. Resa especially loves to sit on the little pink chair to the right. She reads books to her dolly and does other adorable things. 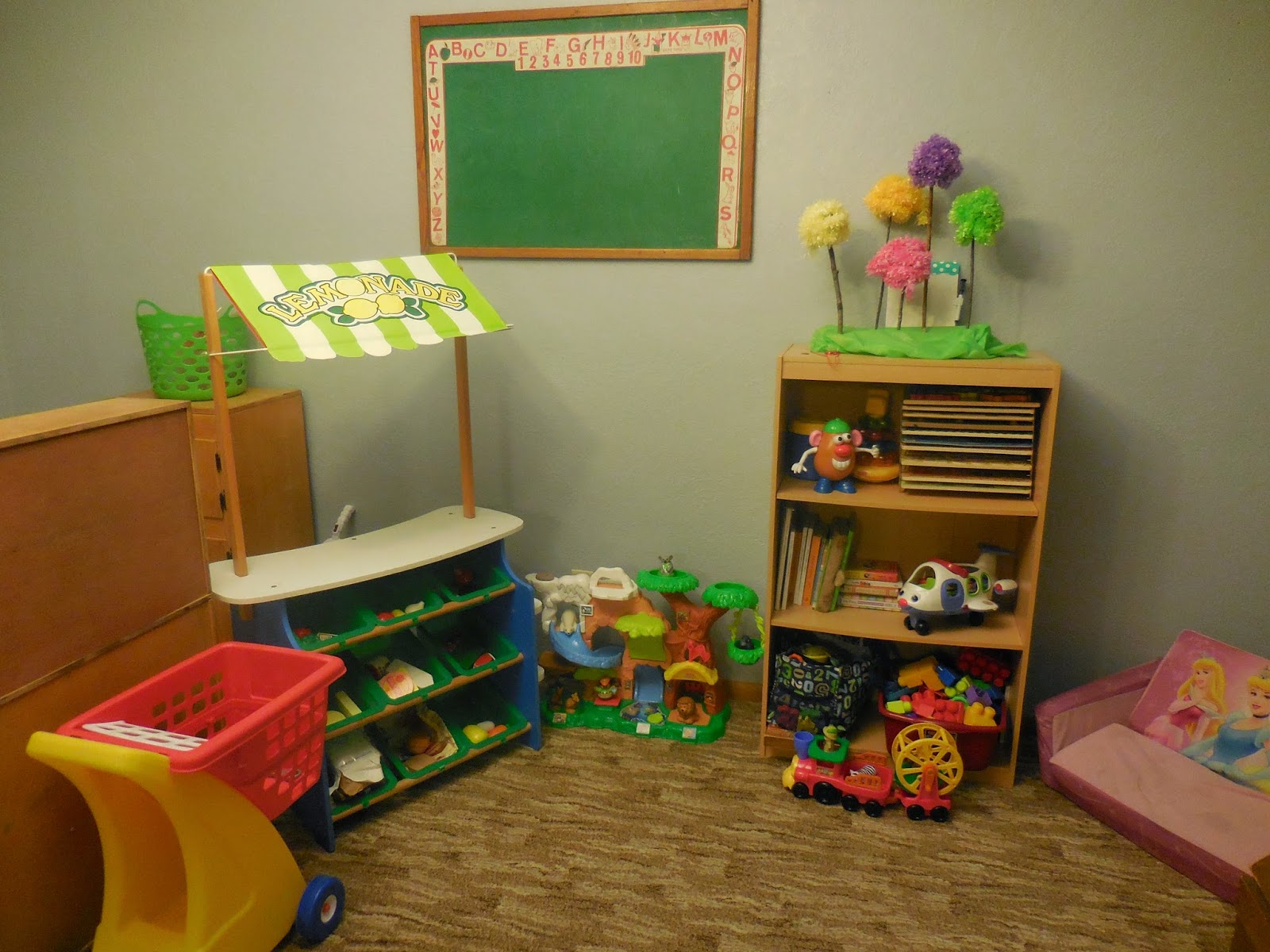 Usually the antique chalkboard I picked up at a local garage sale hangs in this room, though right now I'm borrowing it for my back to school mantlepiece. (That's a word, right? Like a centerpiece on a mantle.)

On the other side of the grocery store is the kitchen / house area. Eventually I'll paint the other two parts of the play kitchen, but I think it still looks cute. The kids love playing here. 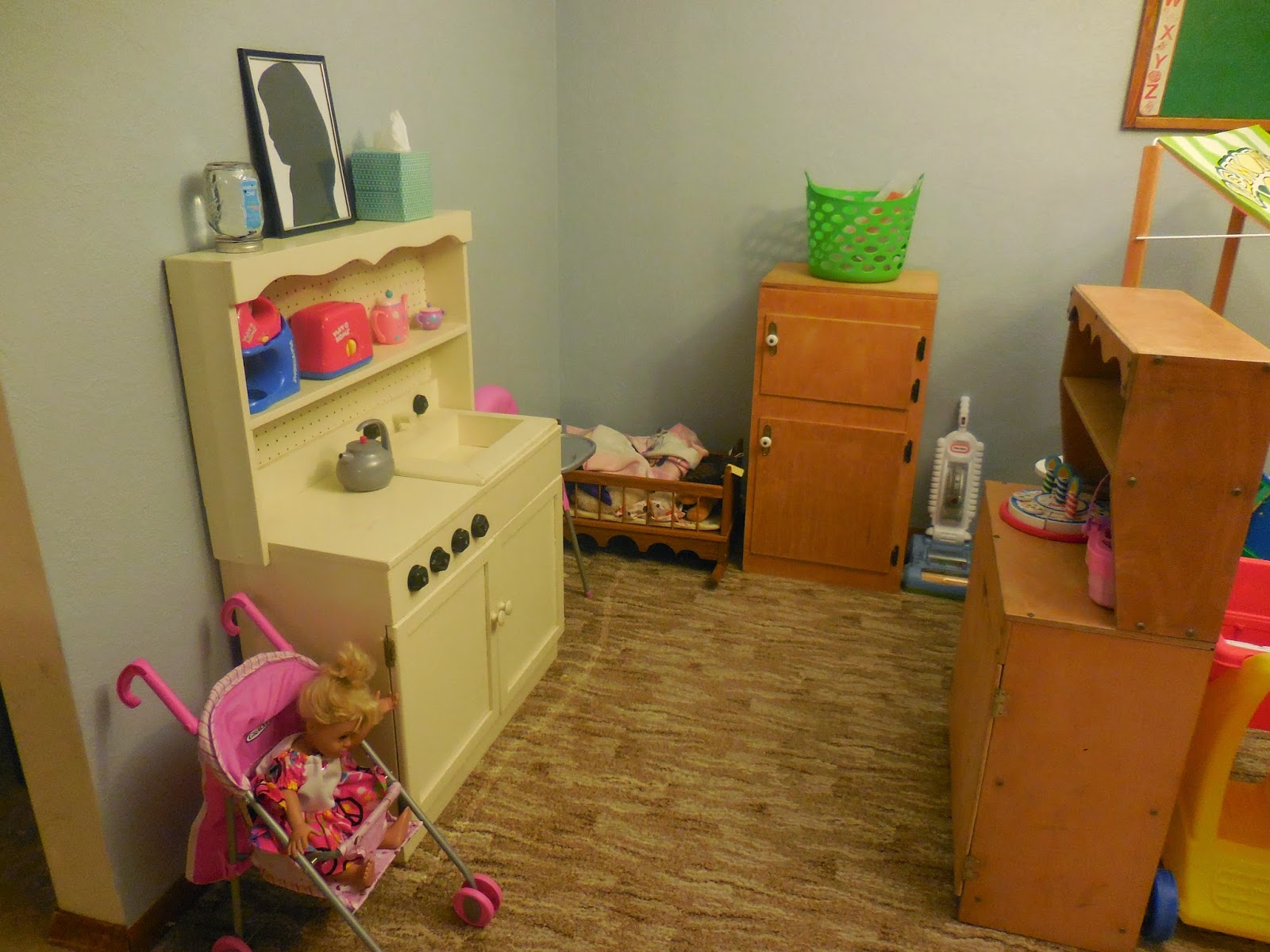 So that's that. The living room and play room. Next up will be the bedrooms. (!) In case you missed Part I of the house tour, which is mostly the outside with a dash of the entryway, you can find it here.


What do you think? And tell me about your home's play rooms? First floor? Basement? What kind of storage? So on.