Remember waaaaay back in late summer when all the kids went back to school? All the moms posted pictures of their kids on the first day of school.

I did that for L, except I totally messed up and marked that she was a second grader instead of a first grader. Oops.

I never did it for JF, who began school the week after L. Double oops.

Nor did I do it for Ben, who began the week after JF. Triple oops.

So here I am, trying to make up for past mistakes.

JF was so excited for his first day of school (pre-school at the local public school so he can continue his speech therapy services). His brother and sisters kept talking about the bus (the bus!) and so he was excited too. Even though it was a new district and classroom for him, he seemed really pumped. 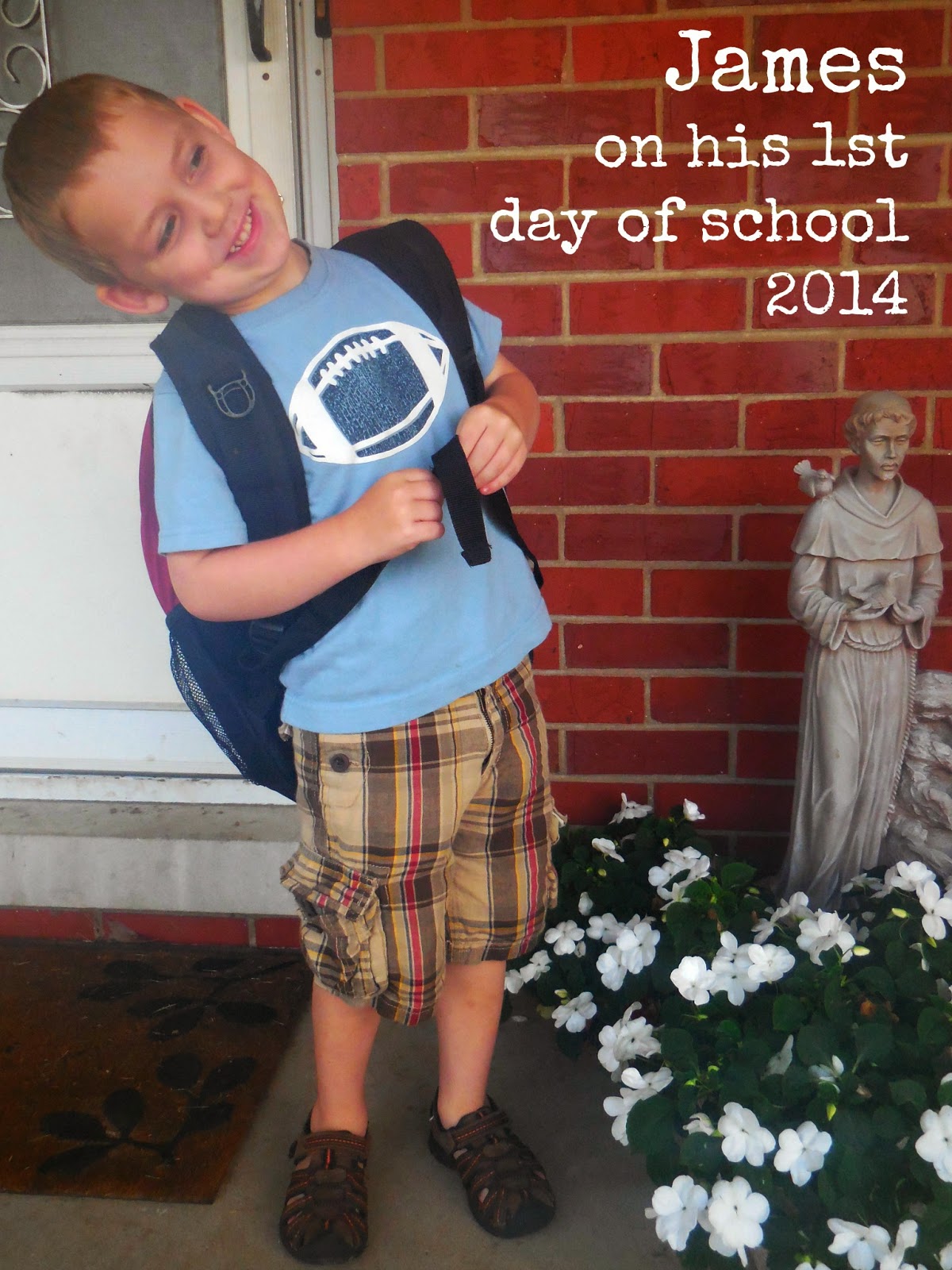 For some reason my camera fogged up, but that didn't stop me from getting a group picture. Look at how happy they are! The bus! The bus! JF gets to ride the bus! 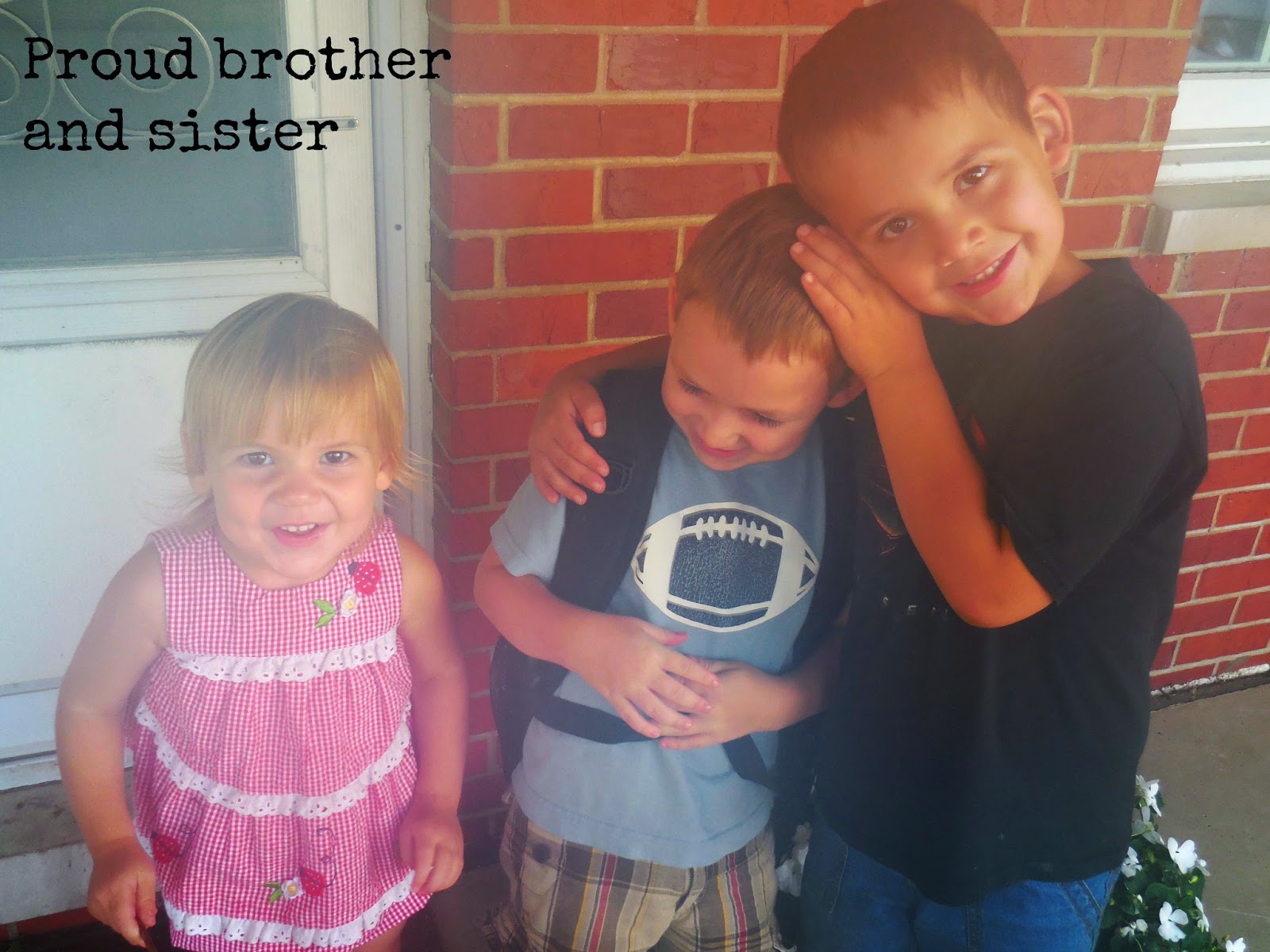 And then the bus came and JF realized he had to get ON the bus and LEAVE - ALONE! 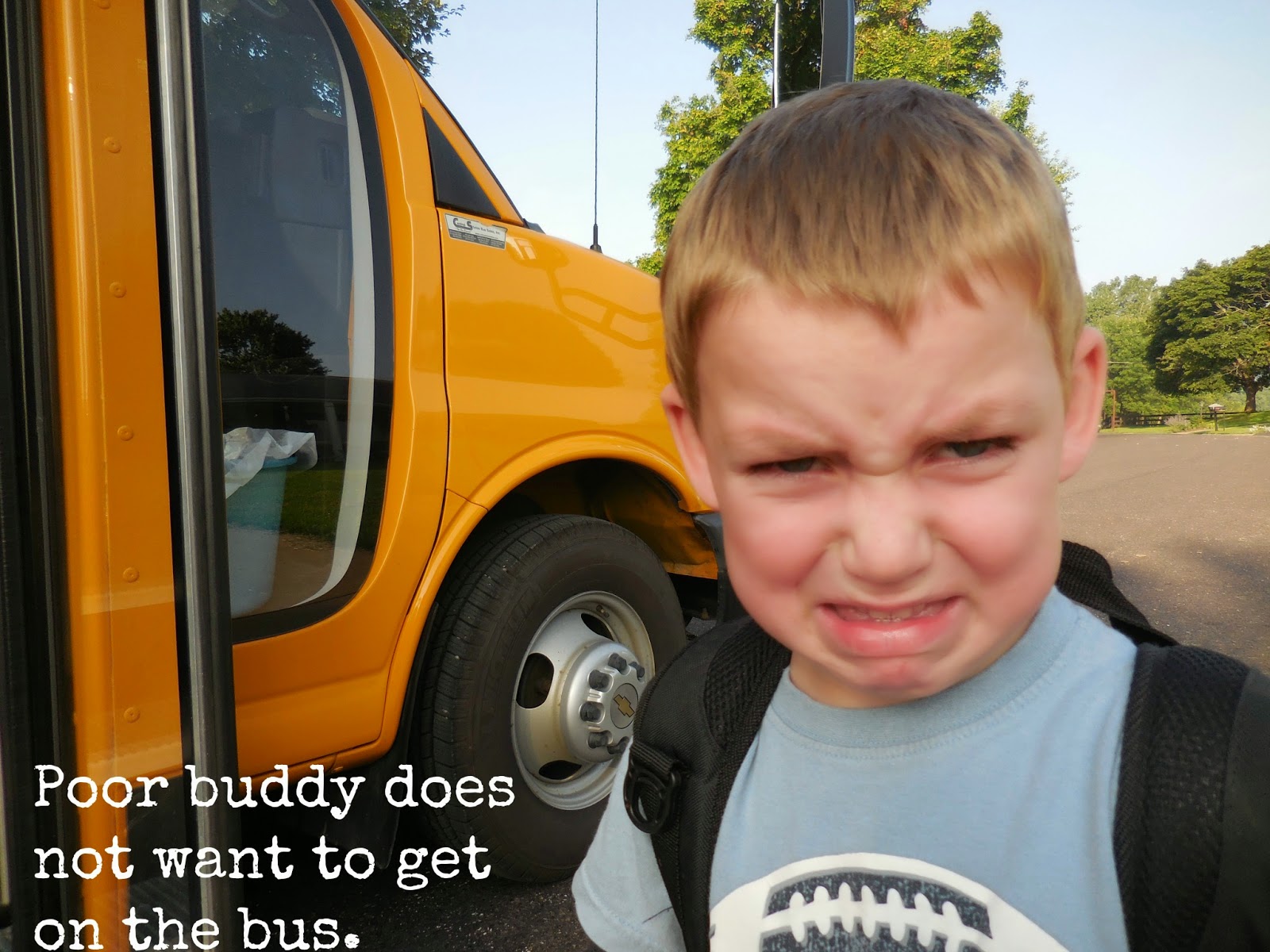 I could hear him screaming as they drove away. :(

The next day I didn't stand and wave, just walked him to the bus, said good-bye and walked away. He still cried. The next day I asked him if he wanted to take flowers to his teacher and he loved that idea. For weeks we would pick flowers from our landscaping and, clutching them tightly, he would climb the steps of the bus with a huge, proud smile on his face and not even a hint of fear.

I'm so glad we ripped out those bushes and planted flowers.


The week after JF started was Ben's first day of Pre-K4 at our parish's school. After having his brother and sister go off to school every day without him for a whole year, he was ready. He was pumped! 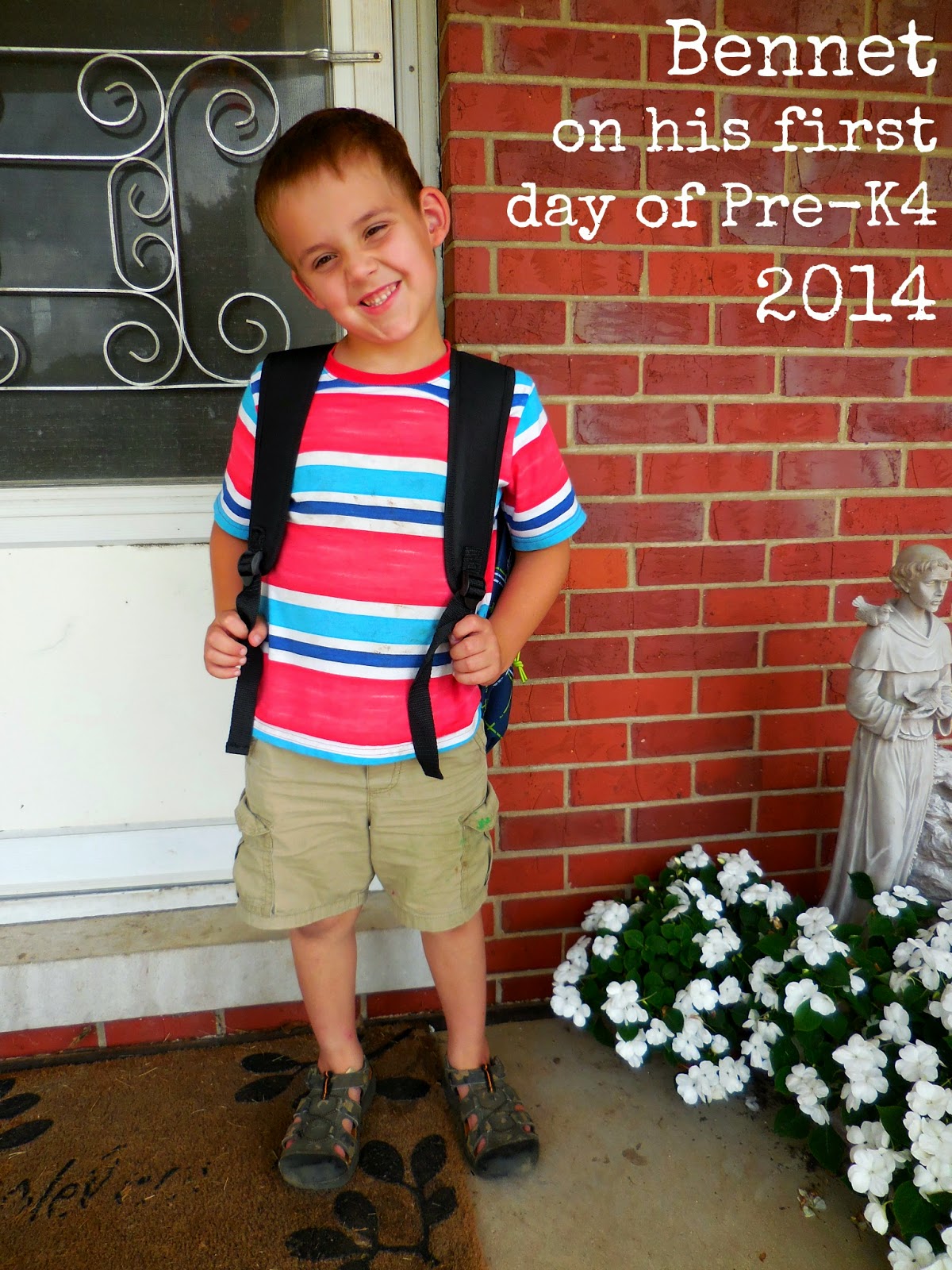 We did the first day of school questionnaire and I love his answers. 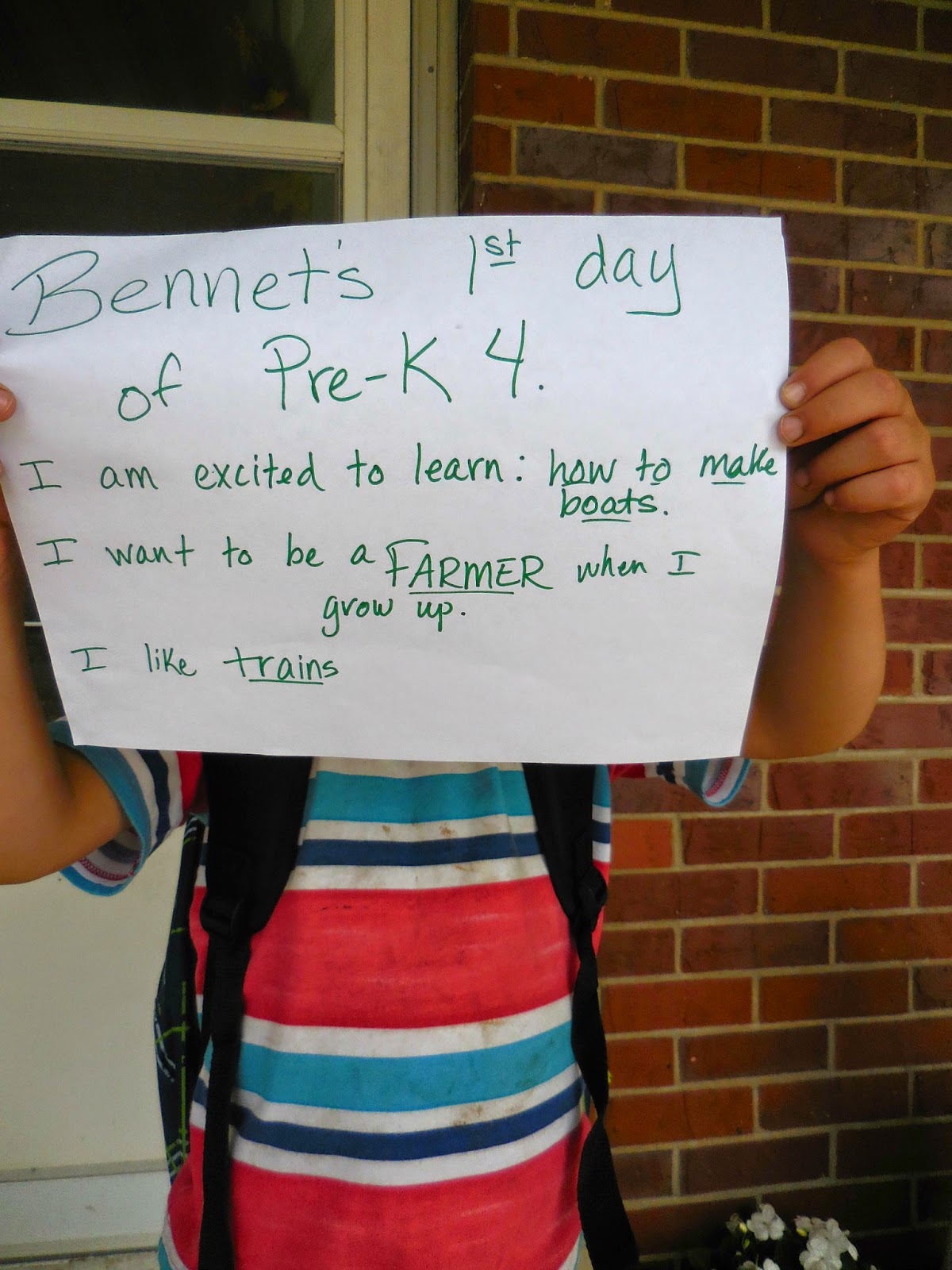 Poor little boy, boat building is not a part of the curriculum.

But he has learned so much. Both my boys have. They are having so much fun and they love school.
It's such a delight to see my boys thrive.