A NICU Anniversary & What's best for James with the Sheen cause?

Four years ago today James came home from the hospital.

There are several memories that are burned into my mind from our seven weeks in the NICU at the Children's Hospital of Illinois.

I remember the hot crocodile tears that rolled down my face while Dr. C told us what was expected of James because of the brain damage, and I remember the face of the resident as she stared at me while I cried, trying not to cry.

I remember the casual way one of the nurse practitioners mentioned that they thought they would have to amputate James' leg because the tissue had been dead but now it was "healing nicely."

I remember the day James first opened his eyes and he didn't respond to light or moving objects or the sound of our voices, like he was blind and vacant.

I remember walking towards James' room and seeing into a room at the end of the hall, its door wide open. A woman in  a pink robe stood over her baby's crib, her right hand on her face, and she sobbed, her whole body shaking. I remember empathizing with her and thinking, "She must have a bad diagnosis - as bad as ours... or worse."  The next day the room was empty. I asked James' nurse and was surprised to hear that the baby had gone home to his family, a healthy little boy who just needed to be observed for a night. "That's all?!" I thought. Maybe I had misread her tears of relief or gratitude or fear of what could have been as tears of sorrow. Or maybe they were tears of sorrow because she was still processing everything. I was happy for them but also felt incredibly alone.

The NICU, it's a tough place.

Four years ago as we packed up James' room and signed discharge papers I was thrilled and terrified. We felt really strongly that James would do so much better at home and we were really looking forward to everyone being home together. We also wondered why it could be that one night James would need to be hooked to wires and machines and have all his diapers weighed and then the next he would be left in the possibly capable hands of his mother. 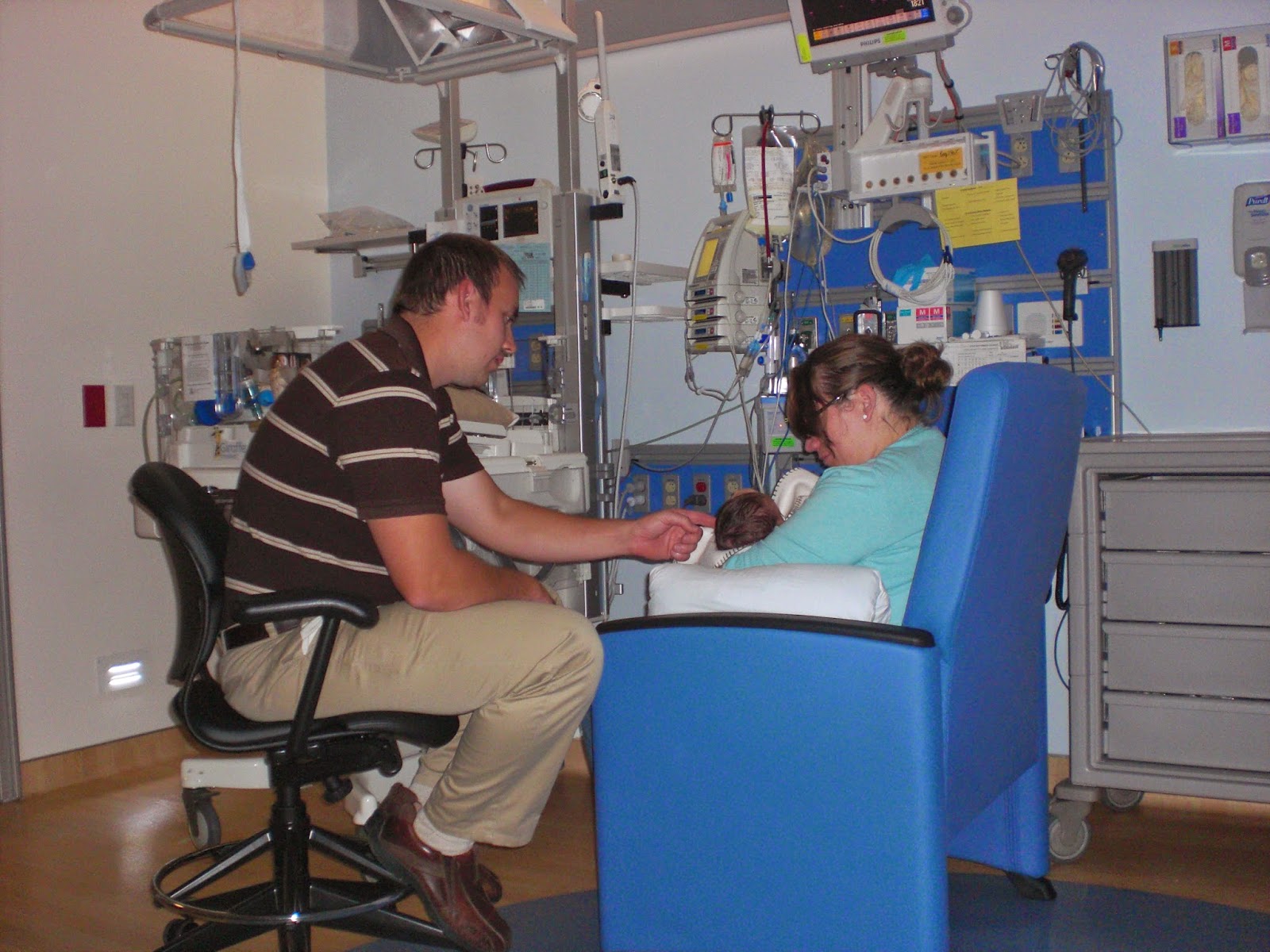 I was so afraid of who James would be... what he would be like... of how long would be the list of things he could not do. I was jealous of the woman in the pink robe.

And the weeks and months rolled by and James did well. The doctor visits and follow up MRI, they confirmed what we already believed: that James was healed, completely normal.

Guys, I want Fulton Sheen to be canonized. I really, truly believe that our whole Church will benefit from Sheen being named a saint. I've tried to focus on that in talking about this whole stupid kerfluffle and the pause in the cause, but now I'm just going to tell it to you straight and talk to you as James' mom.

When we agreed to do the tribunal we really had no idea what we were agreeing to. We had no idea that the Chicago Tribune and the New York Times would be calling us and that news crews would be filming us. We didn't know I'd suddenly get thousands more hits on my blog and that people who I don't know would send me friend requests. We didn't know that with every interview with every blogger or journalist would come the request for a picture of James. How could we have known? All of this was new to us.

Honestly, there's a few things I would do differently if I could and going forward we are doing things differently.

Once we got a glimpse of what it would be like if James' miracle was approved by the Pope we were thrilled that things were moving so quickly for Sheen's cause. Travis and I have been honored and have had a lot of fun being a part of all of this, but for our son's sake we want it to all wrap up while he's still young.

The way it looked like it was going was this:
Congregation for the Causes of Saints will approve the miracle in the Fall, the Pope will approve it some time after that, beatification in late 2015, and then James' 15 minutes of fame are done. The Sheen Foundation seeks a new miracle for the canonization and the focus shifts to that story. James gets to grow up as a footnote in the life of a really cool guy, and only has to stand in the spotlight when he's young enough that it's totally appropriate for him to not give interviews.

But when he's a teenager? When he's a young man? When he's going through puberty? What will it be like when international news snaps his picture at the beatification Mass when he's older but perhaps still growing in virtues like humility and charity? Will it inflate his head or lead to him being bullied or having girls chase him if he's on the Today Show when he's twelve or seventeen or twenty-four?

People pat my hand and say, "Surely this is God's will. Let's just pray for the cause." I am polite, but I really want to say, "Is this God's active will or His permissive will, because there's a difference. And yes, let's pray for the cause, but I'm a lot more concerned about my son. I can tell you're not thinking of him, or his future, and that's not your job so that's fine, but don't tell me that this is all okay. I am worried about protecting him and not majorly screwing everything up. "

I've spent the last two months thinking about Cardinal Dolan. I still don't understand his odd view of first class relics and every time I try to give him the benefit of the doubt I become even more confused about why he's stopped the cause. But I finally realized that the reason I'm angry with him is because I feel like he's messing with my son's future and he hasn't even considered that - he doesn't even care.

Sooner or later God will see that Sheen is declared a saint, if that is what He wants. I'd like to see that happen now, but it's fairly easy for me to trust that God's allowing this to happen and is making great things happen in the meantime. But it's only easy when I think of it the way everyone else seems to think of it: as a totally impersonal matter - something they may have an opinion about but nothing that affects them much.

To just about everyone, the pause in the cause story is about Church politics, but for us it is very personal: it's about our son. Four years ago today James left the NICU and I've been trying every day since to do the best for him. I do trust in God, but I also feel like we have been handed another cross and so you'll have to excuse me as I stumble under the weight of it. Growing in virtue is hard; being charitable, patient, and forgiving is hard; not bearing grudges is hard. 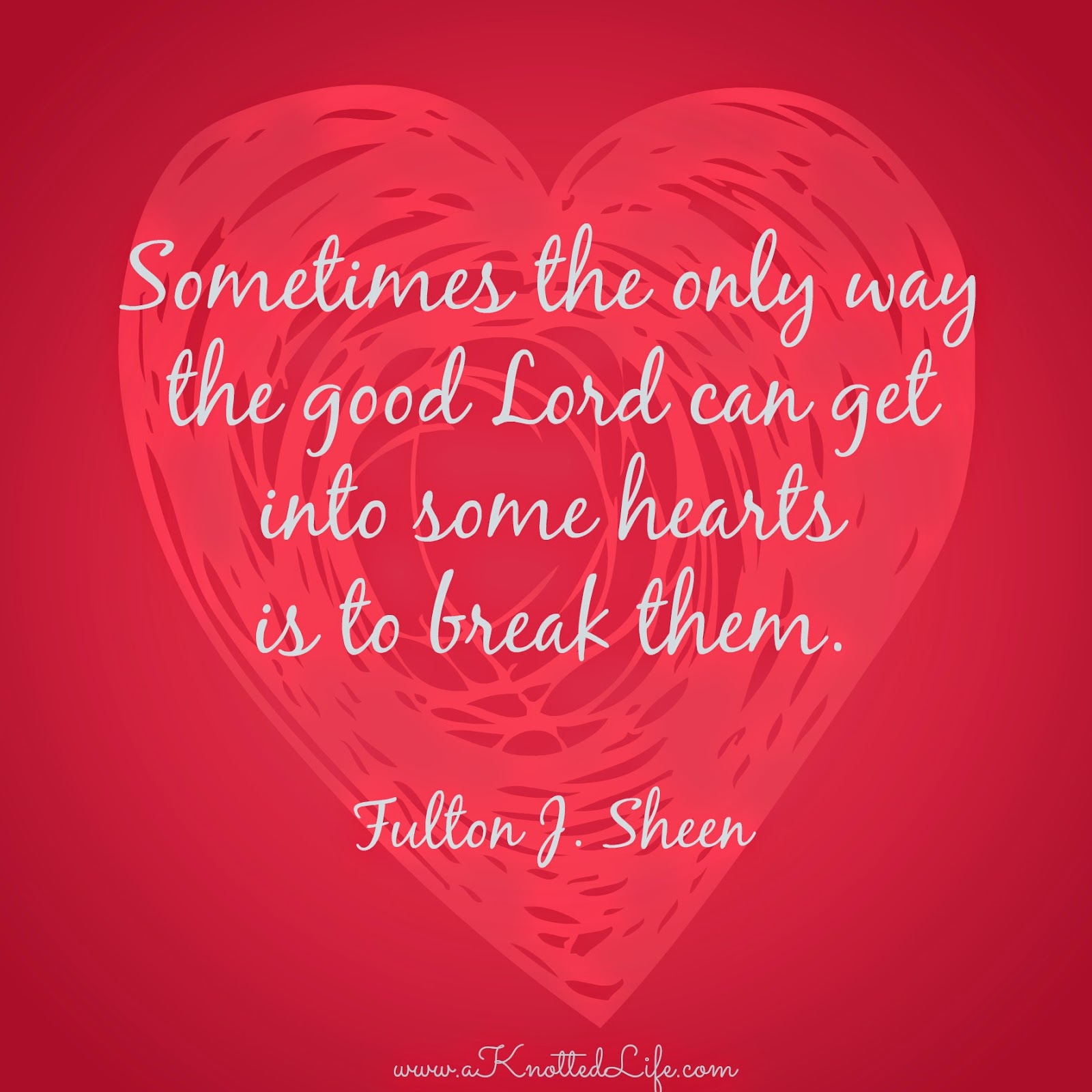