Seven Reasons I Prefer Being a Mrs. Mom

When I was growing up there were two types of moms: the ones I was instructed to call by their first names and the ones I was expected to call by "Mrs. + Last Name." As a child and even as a teen I saw the First Name Moms as the fun moms, the cool moms, the moms who would let us get away with stuff. Interestingly, as a child and a teenager I saw the Mrs. Moms as the reliable ones, the moms who asked about my grades and extra curriculars and were always proud of me when I did well. To be honest, I felt safer in those homes, even if the looseness of the other homes seemed a bit more fun.

As my friends and I began having children I started to see that it was not just a phenomenon of my youth, but even among my friends and acquaintances there were First Name Moms and Mrs. Moms. 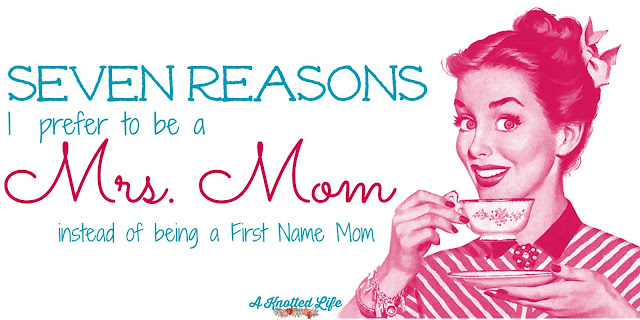 What I found even more surprising was that the it seemed to work that the moms would decide what their kids would call other moms, usually without asking preferences. I guess that's a parenting style?

But if anyone ever does ask I tell them to call me "Mrs. Engstrom" or at least "Mrs. E." This isn't a backhanded way to try to get my friends to comply with my preferences, but I thought I would share the seven reasons why I prefer being a Mrs. Mom.

The only time I make exceptions for this is with godparents. There should be an intimacy with godparents that does not exist with other non-family member adults.


2 - It makes me an authority figure to children, someone they should obey and someone they can come to for help.
This is surely heavily influenced by my own experiences, but the Mrs. Moms were always the ones I trusted most as authorities. Just as a police officer or teacher would be obeyed and someone a child knows they can go to for help, when a child sees me as an authority it makes it so much easier to keep him safe.


3 - It honors my marriage.
Being Mrs. Engstrom communicates a lot of information. It lets people know that my husband, our kids, and I all go together. And honestly, because I so love and respect my husband, it thrills me to known as his wife. Our marriage is a happy one and any time it can be acknowledged makes me feel like the luckiest woman on earth.


4 - It distinguishes between adulthood and childhood.
A friend of mine grew up in the 1950's and shared with me that when she was young one had to accomplish something in their life before they were considered mature enough to call their elders by first names. Marriage or a college degree were the basic standards, though I believe returning from military service or building a successful career were also acceptable. I am quite drawn to the practice, to acknowledging the difference between the two stages of life but also acknowledging when a person stops being a child and becomes a man or woman.


5 - It makes sense with my husband's job.
My husband is a teacher and is known as Mr. Engstrom or Mr. E. There are plenty of times when we are out together and run into ones of his students. As our children age and their friends become his students it just makes good sense that we are Mr. and Mrs. Engstrom all the time, not just during school hours and on school grounds.


6 - It shows respect.
If we were to meet the president, queen, or see our doctor or priest we would not refer to any of them by their first name. We would respect their title and call them by it: Mr. President, Your Majesty, Dr. Smith, Father Thompson. By calling all adults Mr. or Mrs. we are automatically communicating to our kids that they should be respected, while teaching them a societal standard.


7 - I'm not a cool mom.
Nor do I want to be. I want kids to have fun at my house, while playing with my kids, but I never want them to think that I don't have standards and expectations for them. I would much rather let them know that I will always have cookies and fresh fruit for them, but never beer. I can be counted on to get them safely to and from events, but I won't be okay with them going to a house party. Parenting children is not about being friends or being liked - it's about being someone who will love, nurture, provide and care for. That's not cool, but it's what I want.


So there's my reasons. I'd love to hear if you're a Mrs. Mom or a First Name Mom and why. In the words of Pat Benatar, hit me with your best shot.