Hut, Hut, Hike me one of them chocolate football strawberries and pass me that dip!

Have I ever told you how much I hated football in high school and therefore most of my early - mid twenties?

Think of the show Friday Night Lights and that just about sums up my high school and town's love of teenage boys throwing a ball around. More people attended games than voted in local elections. I didn't know anything about the game or its rules, I just knew those boys got a lot of slack because they wore jerseys. Hashtag: Lame.

But then I married Travis and every Sunday, Monday, and Thursday was special because of the NFL, and extra special if the Chicago Bears were playing.

Over the years I have come to enjoy football. Travis has patiently taught me the rules, refreshing my memory when needed. The kids and I went through a phase where we listened to the ESPN Tim Tebow song way too much. I started to listen to Mike and Mike in the Morning.

But I have especially grown to love Sundays during football season. The family always gathers, sometimes with friends, and we eat pizza and chips and dip and drink root beer or beer beer. I watch, I cheer, I eat, and sometimes I nap. It's fabulous.

Last Sunday the Bears were playing the Packers. Honestly, I was a little nervous about how it would turn out for my Chicago team (read: I thought it was going to be an embarrassing defeat) but we still invited some friends over to watch the game.

We watched the pre-game show. Please note Travis, in his recliner, with the iPad following his Fantasy Football and his hand holding an entire box of Football Chocolate Strawberries. He did share, but they were that good. 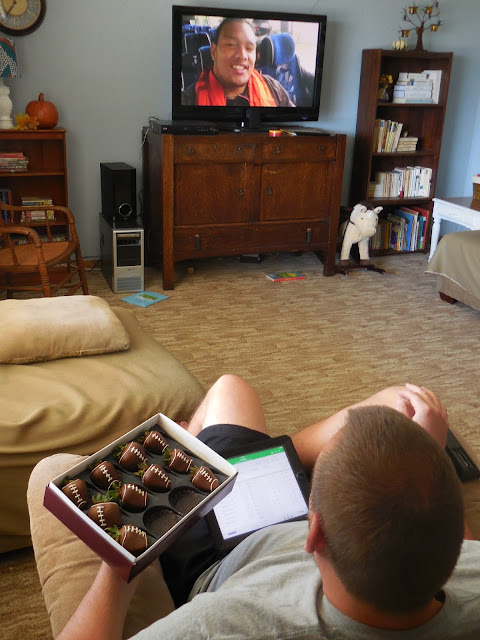 In the end, the Bears lost but they held their own and it wasn't as bad as I thought it might be. The first Sunday football event was fun and relaxing. The strawberries lasted to the end of the game but not the end of the day. We scraped every little bit of that Rotel dip out of the crock pot.

Don't know that recipe? It's easy and so good:
1 can Rotel (or any tomatoes with green chilis)
1 block of cream cheese
1 pound of sausage (we like the hot / spicy kind for this recipe)

Cook the sausage; drain the extra grease.
Add the ingredients to a crockpot and let the melting happen.
Mix well and serve with chips.


Come noon Sunday we will be watching the Bears play the Cardinals. Here's hoping! Who will you be watching? And what does your football menu consist of?

You can order your own for a game or a Fall themed party (!) or just for the heck of it because they're delicious by visiting their website. They've even got some suh-weet deals going on.  They come in cooled packages and pretty boxes. 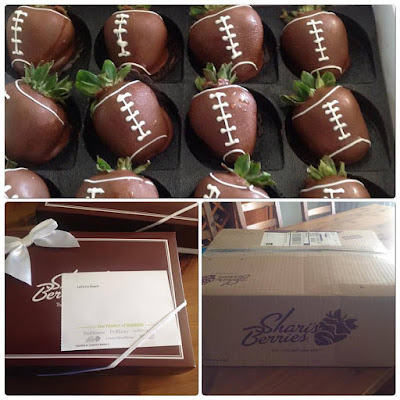 All the food was good, but the berries were definitely... 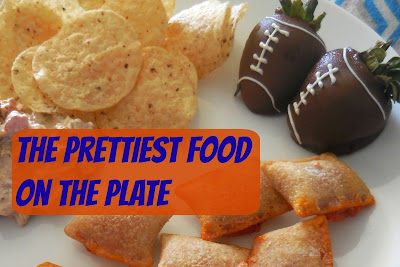