Donald Trump is Naked: The Truth about the Emperor's New Clothes 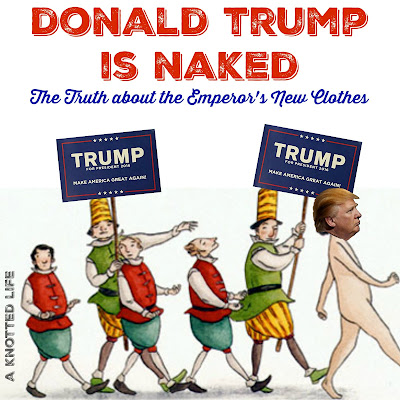 I don't want to make anyone blush, but I think we all need to talk about the Emperor's new clothes.

At the beginning of this election season Donald Trump showed up with promises to make America great again and people responded. I didn't think he stood a chance - a reality tv star as president?! - but I get why people are drawn to him. I know that people are scared; they are angry; they are anxious. A lot of us are fed up with politics in America, with jobs leaving the country, and with the dwindling middle class. And Trump has promised to fix all those areas that are troubling us. He tells it like it is and he isn't afraid of doing so.

And in doing so, many Americans have admired the man, cheering him on and voting for him at the polls.

But I wonder if people know who and what they are really cheering - do they get who they associating themselves with? I know it looks like Trump's wearing a shiny new suit but the fact is, the man is naked. He's got nothing on - no policy, no plans, no diplomacy... he is showing us his true self and it is ugly.

Take, for example, this incident: Peter Alexander, a reporter for NBC Nightly News said to Trump, "Is that presidential [to say 'ass' 'p*ssy' 'motherf*cker' in public]? A lot of parents are wondering how to explain that language; what would you say to parents?"

And then instead of answering the questions, Donald Trump mocks the reporter and says, "It's stuff like that [believing a presidential candidate should not use vulgar language during a press conference] that people in this country are tired of." people are tired of ... good manners? Believing in the dignity of the presidential office? Setting a good example for children?

Donald Trump didn't answer the questions, he just mocked Alexander. And then people whooped and cheered.

You can watch the video of Peter Alexander and Donald Trump's exchange on The Nightly News' Facebook page while I let out a long, slow, infuriated exhale.

Donald Trump keeps winning and I don't know why.

This is a man who publicly mocks a man with a physical disability and people laughed and cheered and voted for him.

This is a man who thinks partial birth abortion should be legal and pro-life Republicans lined up to follow him as he paraded through town, and then they voted for him.

This is a man who wants to commit a war crime and kill the wives and children of enemy soldiers and people declared "What beautiful clothes!" and then they voted for him.

This is a man who didn't want to renounce the KKK and their endorsement of his candidacy and yet people still showed up to cheer and vote for him.

This is a man who categorized Mexicans as rapists, refused to apologize for it, and people voted for him.

This is a man who wants to "open up libel laws" not in the pursuit of truth and justice but so he can sue and "win lots of money" while doing who knows what to the First Amendment. And people voted for him. They cheered, commented on the lovely color and rich fabrics he was wearing, and then they voted for him.

This is a man who repeatedly says insulting things to and about women, making people laugh and then vote for him.

We need to be the boy in the crowd who cries out, "But the Emperor is naked!" The behavior, actions, and plans of Donald Trump are not real clothes.

Trump is not the savior of this country. I'm not Pollyanna and I know that not every president - and certainly not every politician - is a Washington or Lincoln. But just so we're clear, if you vote for Donald Trump you are supporting his wardrobe.

Don't associate with the man. I know he seems like this great candidate - an outsider, a man willing to go against the establishment - but he is a belittling, bigoted bully. You cannot support a man like this without becoming what he clearly is. Your emperor has no clothes on and it's time to face the ugly truth.