Why He Talks Like That: Childhood Apraxia of Speech

May 14th is Apraxia Awareness Day and so I thought I would use this opportunity to share a little bit about the diagnosis in our family. When special needs show up in our kids' lives it can be scary and lonely and so I tell our story in the hope that it will help other moms. I am in no way an expert but I share this because I had never heard the words before my son's speech therapist suggested it to us almost four years ago. I hope this post will be helpful to those people who meet or already know our son along with any other family who may have or already has a member with this diagnosis. 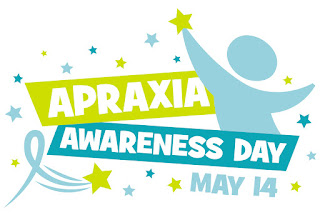 Our third child's first word was "walk." He loved going on walks and requested a walk at least once a day - rain, sun, or snow! But beyond "walk" there weren't a lot of words he said, even well after his second birthday

Now JF had a traumatic birth and spent seven weeks in the NICU. During the first months of his life he was pulseless for over an hour, had several seizures, was intubated, had several surgeries, and went through various other procedures. That's a lot for a little body to handle and any of those things or the sum total of them are likely to blame for JF having childhood apraxia of speech.

However, it is also possible that he could have had a perfectly normal birth and trauma-free infancy and still have apraxia. There is no known reason for apraxia in up to a third of the children who have it.

But maybe I'm getting ahead of myself. What is apraxia? Well, it is a speech disorder where the person has trouble saying what they want to say. A person with apraxia understands language and even knows exactly what words they want to use but for some reason there is difficulty forming the words and producing the right sounds.

In adults, apraxia usually happens after some kind of head trauma or a stroke. In children, it can be the result of trauma in infancy or there can be no reason for it. Adult Apraxia of Speech is usually permanent. Childhood Apraxia of Speech is overcome with speech therapy, hard work, and time.

Apraxia can also show itself in a couple other ways, besides speech. JF had feeding therapy well before he ever had speech therapy because he didn't always swallow correctly. Chewing food and swallowing was something we had to work on with him. He also drooled a lot as a baby, toddler, and small child because he couldn't keep the saliva in his mouth like most of us do. Even today his face is the messiest of all his siblings after a meal. I have heard that some children have apraxic problems with other gross and fine motor skills (kicking, jumping, running, coloring) but we haven't noticed those things with JF.

So that's what it is, why it happens, and what it looks like - now let's talk about what it's meant for my family.

For starters, it has meant therapy and special ed. Because JF was a NICU baby who received cooling therapy he automatically qualified for Early Intervention in our state. As soon as he was discharged from the hospital we were making weekly or monthly appointments with a variety of specialists. In this way we were fortunate because his feeding / speech therapist was able to spot his difficulties much earlier than Travis and I would have ever considered there being a problem. In fact, for a long time we just thought he was a quiet kid. WRONG. JF is a silly, loud kid who couldn't speak.

Once JF turned 3 he aged out of Early Intervention and began attending preschool in an Early Childhood Education classroom at the public school. Here his speech therapy went from one hour once a week to twenty minutes three times a week with extra emphasis on language throughout his school hours by all his teachers. His language began to burst. For most people he was still very hard to understand but those closest to him could now talk to him. It was wonderful!

In that first year of school, when he was three, he often dropped the beginnings and sometimes the endings off words and only used about 1/5 of the words needed for a sentence but with context we knew what he was saying. JF also used a lot of signing and gesturing to help in his communicating. "Grandma, will you take me on a walk to the park now?" would be said, "Ama, walk 'wing?" with him pointing to himself and outside, then swinging his hand back and forth with "'wing" and finally pointing to the ground for "now."

We were also able to get an iPad with Go Talk NOW to help James communicate. He took it to school each day and we used it around the home but he wasn't very motivated to use it and relied more on trying to say the words and gesturing.

Another thing that helped JF was his siblings. They were often able to "translate" for us - no big deal. I also really believe that his younger sister helped him grow his vocabulary and sentence building. Eventually she would surpass JF, but for a long time Resa and he were progressing at the same rate and it was really beautiful to see how their friendship was helping them both.

JF just finished his third year in Early Childhood Education. He has gone from having a profound speech delay to a low-moderate one. His language continues to improve and even strangers are able to understand him now. He sometimes has trouble controlling his volume, especially if he is excited or hurt but we notice him making gains each week. We don't know how long JF will need extra help but we know that at some point - third grade, eighth grade, sophomore year of high school - he will be fine and no one will ever know he had issues with his speech.

If you or someone you know has a child with a childhood apraxia of speech diagnosis, there is hope. Your little one will find his voice, too.

PS - I have found the Apraxia Kids website to be an incredibly useful tool. 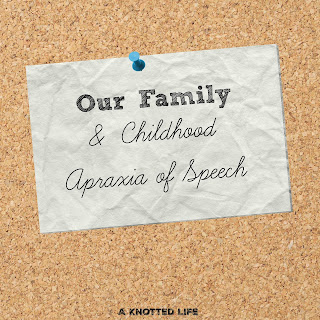