One More Novena for Sheen

It is also the day when a New York judge will make a decision regarding the court case between Sheen's next of kin and the Archdiocese of New York. We are hopeful but we are also incredibly sad that it has all come to this.

The Sheen Foundation has invited everyone to join them in praying a novena beginning Monday, September 12 and ending on Tuesday, September 20. Any novena prayers are appreciated. My family will be joining the Sheen Foundation in the Archbishop Sheen novena, which is copied in whole below. I will also share each prayer each day on the A Knotted Life Facebook page. 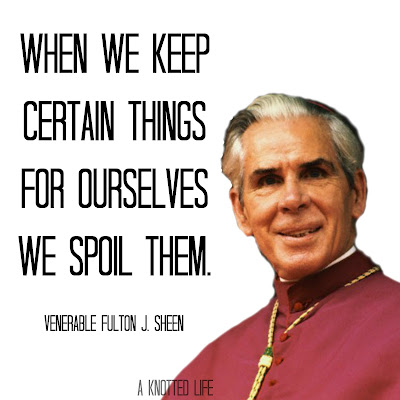 Day 1
“How God will judge my life I know not, but I trust he will see me with mercy and compassion. I am only certain there will be three surprises in Heaven. First of all, I will see some people whom I never expected to see. Second, there will be a number whom I expected who will not be there. And - even relying on God’s mercy - the biggest surprise of all may be that I will be there. When the record of any human life is set down, there are three pairs of eyes who see it in a different light. 1. As I see it. 2. As others see it. 3. As God sees it.” Archbishop Fulton J. Sheen

Lord, help us to focus on You as Fulton Sheen did so that we may be humble when looking upon ourselves, so that others will see You when they look upon us, and so we can see our lives as You see it.

Prayer of Canonization: Father, source of all holiness, You raise up within the Church in every age men and women who serve with heroic love and dedication. You have blessed Your Church through the life and ministry of Your faithful servant, Archbishop Fulton J. Sheen. He has written and spoken well of Your Divine Son, Jesus Christ, and was a true instrument of the Holy Spirit in touching the hearts of countless people. If it be according to your Will, for the honor and glory of the Most Holy Trinity and for the salvation of souls, we ask You to move the Church to proclaim him a saint. We ask this prayer through Jesus Christ, our Lord. Amen,

Our Father, Hail Mary, Glory be


Day 2
“Protestants, Jews and Catholics have God, morality, and religion in common. In the name of God, let us - Jews, Protestants, and Catholics - do two things: 1. Realize that an attack upon one is an attack upon all, since we are all one in God; it is not tolerance we need, but charity; not forbearance but love. 2. Begin doing something about religion, and the least we can do is say our prayers; to implore God’s blessings upon the world and our country; to thank Him for his blessings; and to become illumined in the fullness of His truth. There is entirely too much talk about religion and not enough action.” Archbishop Fulton J. Sheen

Lord, Fulton Sheen reached out to people of every religion. Help us to see others as You see them and to focus on what we have in common instead of our differences.


Day 3
“In every friendship hearts grow and entwine themselves together, so that the two hearts seem to make only one heart with only a common thought. That is why separation is so painful; it is not so much two hearts separating, but one being torn asunder.” Archbishop Fulton J. Sheen


Day 4
“The great tragedy of life is not so much what men have suffered, but what they have missed. And what greater tragedy is there than to miss the peace of sin forgiven? There is not a man living who, if he willed it, could not enjoy the spiritual food and drink which God serves to all who ask.” Archbishop Fulton J. Sheen


Day 5
“All love on this earth involves choice. When, for example, a young man expresses his love to a young woman and asks her to become his wife, he is not just making an affirmation of love; he is also negating his love for anyone else. In that one act by which he chooses her, he rejects all that is not her. There is no other real way in which to prove we love a thing than by choosing it in preference to something else. Word and signs of love may be, and often are, expressions of egotism or passion; but deeds are proofs of love. We can prove we love our Lord only by choosing Him in preference to anything else.” Archbishop Fulton J. Sheen

Lord, Fulton Sheen loved you above all things. Help us to choose to put you first in our lives so that we may learn what true love is.


Day 6
“Burning the candle at both ends for God’s sake may be foolishness to the world, but it is a profitable Christian exercise for so much better the light! Only one thing in life matters: Being found worthy of the Light of the World in the hour of His visitation. We need have no undue fear for our health if we work hard for the Kingdom of God; God will take care of our health if we take care of His cause. In any case, it is better to burn out than to rust out.” Archbishop Fulton J. Sheen

Lord, even when tired and sick, Fulton Sheen worked unceasingly for your cause. Help us to learn how to tirelessly work for You through Fulton Sheen. Help us to know that there is no rest unless it is in You.


Day 7
“Mary is not only mother of our Lord and Savior, Jesus Christ, but she is also our mother, and this is not by a title of courtesy, not by legal fiction, not by a mere figure of speech, but by the right of bringing us forth in sorrow at the foot of the cross....Mary, by sacrifice and obedience, regained for us the title, Mother of the living. What a destiny to have the Mother of God as my Mother and Jesus as my brother.” Archbishop Fulton J Sheen

Lord, Fulton Sheen learned obedience at the school of Mary. He had such a great relationship with her; he knew that when he went before the judgment seat of Christ You would say ‘I heard my Mother speak of you.’ Help us to better know Mary so we may gain insight into such great obedience, love, faith and hope.


Day 8
“If we followed the same rules for health that we do about religion, we would all be bedridden. It is not enough to talk about the necessity of health; we must do something practical about it - for example, eat, exercise, and rest. So it is with religion. We must nourish ourselves with the truths of God, exercise our spiritual muscles in prayer, mortify ourselves of those things which are harmful to the soul, and be just as scrupulous in avoiding moral evil as we are in avoiding physical evil.” Archbishop Fulton J. Sheen

Lord, Fulton Sheen did not ask others to go to confession or visit our Lord an hour a day without doing it himself. He practiced what he preached. Guard us from hypocrisy and help us to lead others to you through our actions.


Day 9
“The better we become, the less conscious we are of our goodness. If anyone admits to being a saint, he is close to being a devil. Jean Jacques Rousseau believed that of all men, he was the most perfect, but he had so many cracks in his soul that he abandoned his children after their birth. The more saintly we become, the less conscious we are of being holy. A child is cute so long as he does not know that he is cute. As soon as he thinks he is, he turns into a brat. True goodness is unconscious.” Archbishop Fulton J. Sheen

Lord, Fulton Sheen always thought of himself as an unworthy servant and never thought himself a saint. Help us to be humble in our service and to realize as Fulton Sheen realized that all good works come from You.