A Court Victory for Sheen Family, NY's Appeal, and the Bottom Line

I know that all the ins and outs of the court case that is tied to Fulton Sheen's cause for canonization can be confusing. I will try my best to explain it all here, to the best of my knowledge, using plenty of links for your benefit. I firmly believe that poor Archbishop Sheen is mortified over all this and I'm trying to emulate him - a man of action, a man who spoke up - while I'm trying to emulate him - a man who suffered silently and did not fan the flames of gossip. Here goes...

The cause for Fulton J. Sheen's canonization began, in part, on the promises from the cardinal of New York that his archdiocese was not interested in pursuing the cause and they would transfer Sheen's remains when the Vatican said the appropriate time had come.

The appropriate time arrived and, following the canonical norms, it was necessary for Venerable Sheen's remains to be moved to the Diocese of Peoria.

However, in September 2014 the Archdiocese of New York said they would not allow the remains of Fulton Sheen to be moved because, in part, they were following the wishes of Archbishop Sheen and his surviving family, and they were being careful to follow New York state law. You can read their press release here.

Over the years the Vatican basically said to the Diocese of Peoria and the Archdiocese of New York, "You two need to work this out." That's understandable but tricky: the canonical norms state that in the canonization process the earthly remains would be examined and relics reverently gathered in the Diocese that is promoting the cause. Canon law also makes clear that civil laws should be followed in the process of transferring remains, etc. Therefore, with the Archdiocese not wanting to lose their future saint the Diocese of Peoria's hands were tied.

"The proposal ... would balance the personal wish of Archbishop Sheen to be permanently buried beneath the high altar of St. Patrick's Cathedral with the understandable desire of the Diocese of Peoria to have his earthly remains present in their diocese for the celebration of his long hoped-for beatification."

For the record, there is NO record that Archbishop Sheen wanted to be permanently buried at St. Patrick's. In fact, five days before he died he had a new will made that stated he wanted to be buried in a plot he had purchased in a Catholic cemetery in Queens. Where their misunderstanding came from I don't know.

The same newspaper article, from the New York Daily News, then quotes Mrs. Cunningham's lawyer Steven Cohen. He said Mrs. Cunningham and her siblings "'are not in favor of nor did they consent to the shuffle plan. I have no idea where the Archdiocese got that idea but it's not correct.'"

Everyone in Peoria was shocked with the news and Sheen's niece, Mrs. Cunningham, eventually did the only thing left: she filed papers against the Archdiocese and the Trustees of St. Patrick's Cathedral so she could move her uncle's remains. You can read through the court papers here if you want, but what matters most is that, in the end, the judge ruled in favor of Mrs. Cunningham:

"the Court finds that the petitioner has provided a good and substantial reason for moving the remains of the decedent, Archbishop Fulton J. Sheen (Archbishop Sheen), to St. Mary’s Cathedral in Peoria, Illinois, and that respondents failed to supply a sufficient reason to reject the instant application.”

She then ordered that Mrs. Cunningham be granted the right to transfer her uncle to St. Mary's Cathedral in Peoria. You can read the judge's ruling here.

And so, since it has been proven that the Archdiocese was not doing what Sheen wanted, what his surviving family wanted, or what state law required of course they should be graciously  working with the Diocese of Peoria and the Sheen family to transfer the remains. But they're not:

The next step they decided to take: appealing the decision.

I believe that Dolan is doing what he thinks is best for his archdiocese and flock. I believe that overall he has done well for the Church. But I believe that his actions here are misguided and are causing great scandal. I believe justice and mercy both call for him to relent. Personally, I'd love to see Cardinal Dolan and his team focusing all their time, effort, and money on the cause for Dorothy Day instead of throwing away more time and money with their appeal.

At my home we are still praying, and in the end I think this is the bottom line. We need to pray and hold firm to the promise that "all things work for good for those who love God, who are called according to His purpose." (Rom 8:28) My family, friends, and I look forward to the day that all this is behind us and Archbishop Sheen is being canonized in Rome for the glory of God and the good of the Church. + 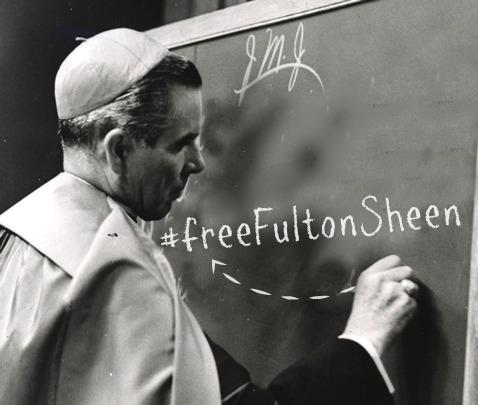