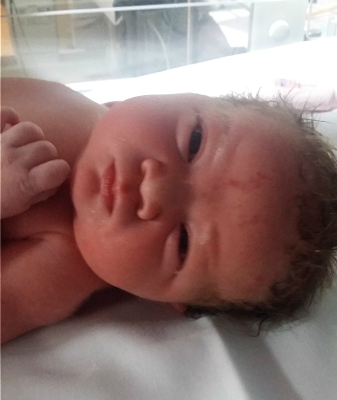 delivered via planned c-section at 39 weeks.
She is named for our Blessed Mother, Miriam being a form of the name Mary, and Moses' sister who led the Israelites in songs of praise after crossing the Red Sea. She is also named for St. Joan of Arc and Travis' dear Grandma Joan.

Miriam's life was another unexpected gift from God. I must tell you that as soon as I got the positive pregnancy test I smiled. It was the biggest, dopiest grin. I was a bundle of nerves and wondered what Travis would think and feel but I quickly told the baby, "I love you," and hoped to God that she would be a girl.

All through that autumn day I would send Travis a text or tell him something and end every sentence in my head with "I'm pregnant." I was afraid he might be worried or upset so I was incredibly nervous to tell him.

"Please pick up some buns on the way home. (I'm pregnant.)"

"Can you have the kids set the table? (I'm pregnant.)"

And finally, after dinner but before bedtime, when the kids were playing outside in the cool evening I said to him, "I'm pregnant."

I thought he might have thought he heard me say "I'm pregnant" when really he just knew I said something else so I said it again. "I'm pregnant. I took the test this morning and I'm pregnant." I was shaking and laughing from nervousness but he smiled at me from his spot on the sofa and said, "This is good news."

And it really, really was.

I laughed and cried and felt such relief and joy. And I hoped she'd be a girl.

The first trimester brought bi-weekly progesterone injections. We never bought alcohol wipes but used vodka to sanitize my hip and I watched highlight videos from the Graham Norton Show while Travis did the injections.  It wasn't my favorite thing - okay, I was super nervous because those needles are huge and the whole process takes awhile - but of course I would do it a million times over for my baby.

On Christmas morning we finally told the kids and our families. After morning Mass my grandpa, uncle, and parents came over. We feasted on bacon and cinnamon rolls and then opened gifts. The last present to be opened was Thomas' - a "Little Brother" onesie with 'little' crossed out and "Big" written above it. L was ecstatic. Ben was worried about having another kid to destroy his things. The others were too busy with their toys. But my mom was thrilled and she too laughed. When we saw Travis' family later that day they too were all hugs, smiles, and congratulations.

We never said anything online, though there were many times I wanted to, but we opted from the very beginning to only tell friends and family who would be happy for us. With Tee's pregnancy there was a lot of hurtful things said to us and we didn't want anyone to ruin the pregnancy for us, to steal our joy. In fact, this is the only picture I took of my bump - a super bad selfie in my bedroom mirror just hours before she was born - because I was otherwise trying to hide the pregnancy in photos. 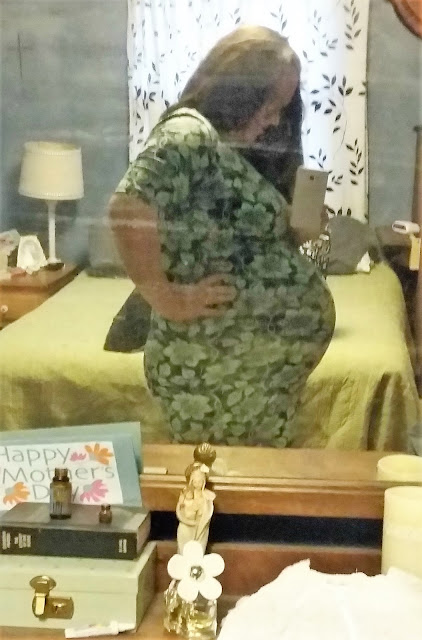 But I've learned something in the meantime: by not telling people we still let those meanies steal our joy. I'm sad that I wasn't able to share my daughter's life with people from the very beginning. I'm sad that we have been so hurt by comments and opinions that we let those jerks control our lives. Our daughter is a precious gift from God and I am sad that I didn't get to proudly share the good news of our great gift from the very beginning.

Miriam's pregnancy was tough and not necessarily because of the pregnancy but because my life was crazy. Sickness, my grandpa's death, Travis' grandpa's death, hard times with the IEP, and then learning that L had two congenital heart defects and needed open heart surgery - remember? - it was a lot.

In the three months that she's been here things have been so good. It feels like we are finally out the thick of things, our life has calmed down and we are happy. She is the sweetest babe - a girl!!! and with red hair to boot!!! I love that I have a little ginger baby and I hope her hair stays its sweet strawberry blonde coloring and her eyes remain their pretty shade of blue. 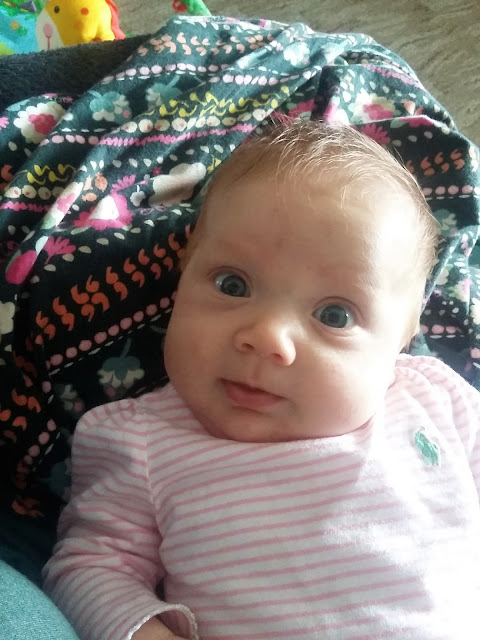 I'll write her birth story later - she's just woken from a nap - but here's the birth announcement three months late. Miriam Joan, whom we call MJ, was born. Thanks be to God from Whom all blessings flow.
- September 10, 2017