The JOY of Sweet Miriam

Sweet MJ is sitting and eating baby food and has two teeth. She has the biggest, smoochiest cheeks and the sweetest personality. She's seven months old now, which seems like a good time to finally tell her birth story, which isn't really so much of a birth story but the story of a series of scary adventures sandwiched between something incredibly joyful. 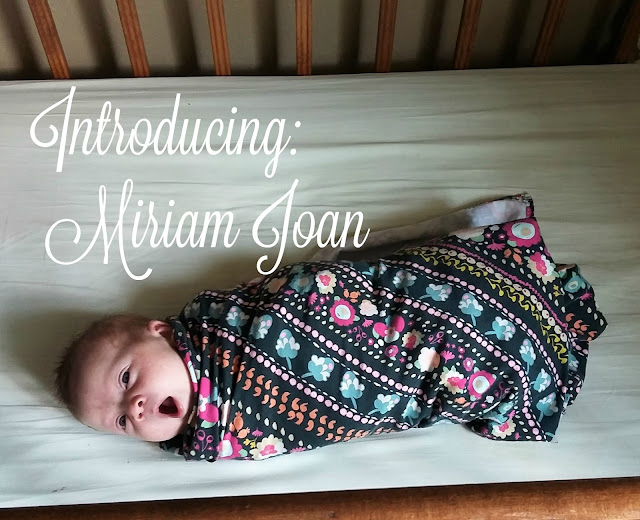 MJ was a planned c-section after a happy surprise, surprise pregnancy. In order to make things exciting, the day before the c-section things went a little crazy. L had a follow-up appointment with her cardiologist, first thing in the morning and while I was still in my bedroom the kids were in the kitchen fixing their breakfasts. JF went to take his daily allergy pill but instead of taking his pill he took my pill - the one for my gestational diabetes. L went to the cardiologist and JF went to the emergency room. There we were told he would have to stay overnight. "Okay. Good plan," I said. "One thing: tomorrow morning I'm supposed to have a c-section. How do you think we can work that out?"

In a complicated scheme Travis stayed the night with JF and I woke up bright and early to drive myself to the hospital. In the meantime, my mom was at our house with Ben, Jofis, and Tee while Resa and L were at our friend Katie's home. As I got my IV Katie and the girls arrived to hang out with JF on the Peds floor while Travis came across the hospital to be with me.

During the surgery the anesthesiologist chatted with Travis and I. I remember feeling anxious - both scared about the surgery and excited to meet my child.

And then the best part of it all happened. My little baby girl was brought out of my womb and held up for Travis and I to see. Travis said, "She's a girl!" and we both had the BIGGEST, HAPPIEST grins on our faces. I can remember the JOY in the room at seeing her and discovering that she was a girl - just as I had wanted. I had prayed that God would give us a girl, one more girl, for quite awhile and all during her pregnancy I hoped and prayed that she was a girl. I remember her traveling to the little nurse table in the corner of the room so she could be assessed and cleaned and I watched her and said, "Hello, Miriam."

Several people in the room asked her name. "Miriam Joan," we told them and they all awed and commented about how beautiful her name was. When they brought her to me I was so happy. 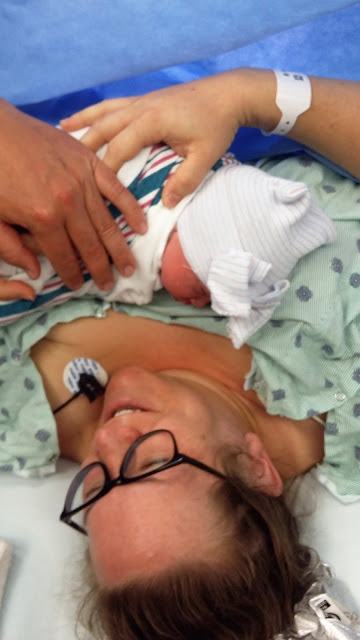 But you know, c-sections are sorta weird and holding her while they're cleaning out my uterus was weird. Here's a glamour shot of it. 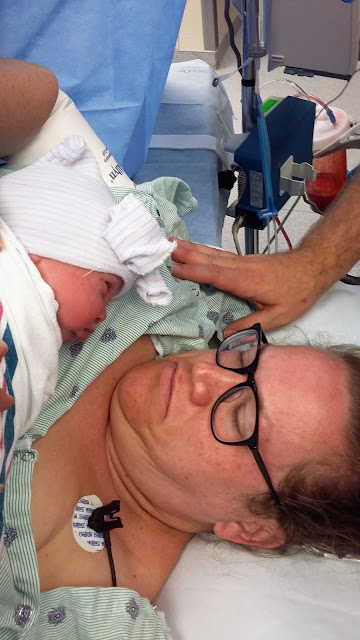 Once MJ and I were comfortably in our room Trav left us to bring the already discharged JF, Katie, and the girls to meet their baby sister. After their visit Katie and the girls went back to her house and our dear friend Joel came to the hospital to take JF home for us. People, it takes a village!

Things went fairly well in the hospital though there was confusion about if she did or did not have a murmur and nursing and letting me sleep and, yeah, it wasn't my favorite hospital stay.

MJ was born on the 8th and we went home on the 10th. We had a good first night but the next day I could not get her to eat. I tried skin to skin. I tried waking her up. I tried making her cold. Nothing worked and so on the 12th we took her to the doctor, got her bilirubin checked, and then headed back to the hospital for jaundice. Her bilirubin levels were critical and for the first 24 hours we could not take her out of her crib at all. She took bottles of my breastmilk under the lights. 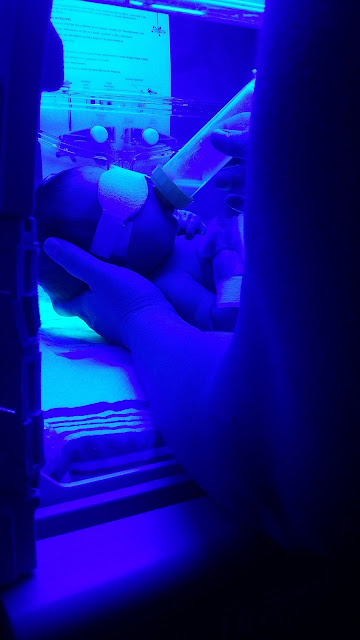 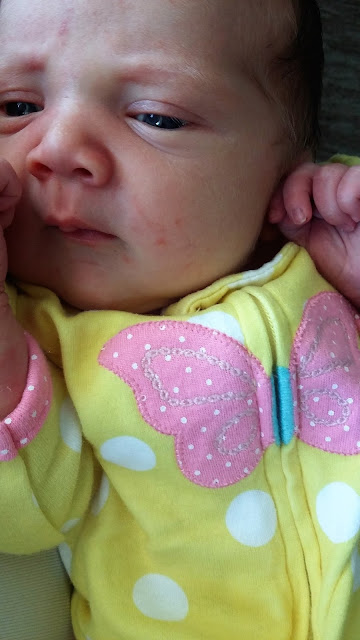 She was gaining weight and her jaundice had greatly improved. After two days she came home though we had to continue to monitor her with daily heel pricks for the week. The day after she came home her doctor from the hospital called to check on her and I finally realized just how worried he had been. God bless him.

After one near - death experience she was officially an Engstrom! ;) Once she was home and we were both healthy we held her baptism. 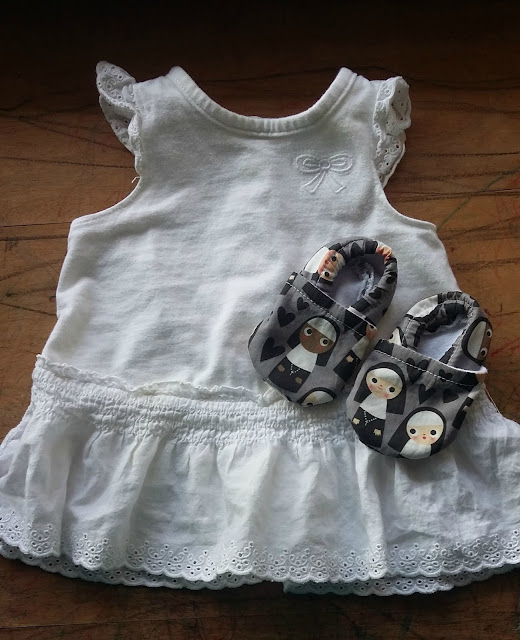 The dress she wore on her baptism is the same Teresa wore but she got a brand new pair of shoes. 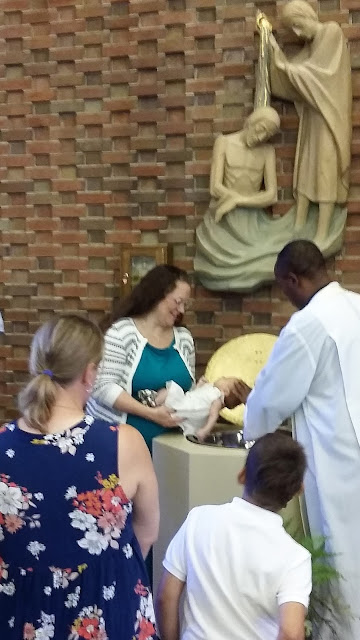 Being baptized by Fr. Julius. MJ's godmother is our dear friend Patti, in the floral dress. 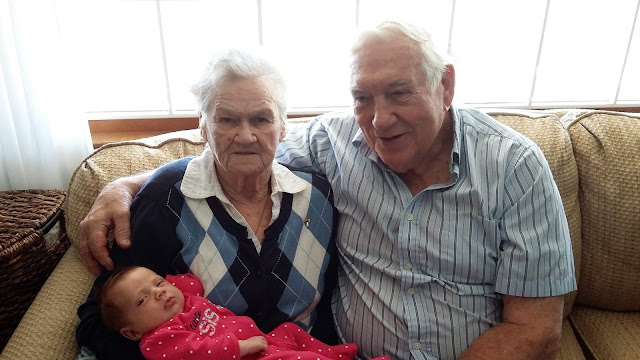 Here she is with my Grandma and Grandpa W. 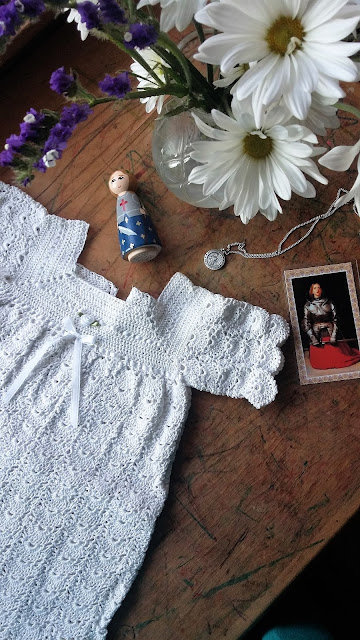 The baptismal gown was made by my friend Sr. Marie Noelle and has been worn by all my kiddos.


She is just the sweetest. Here she is as a wee newborn... 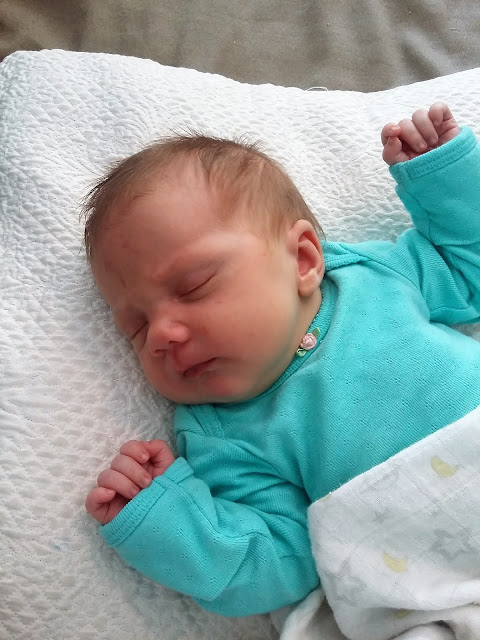 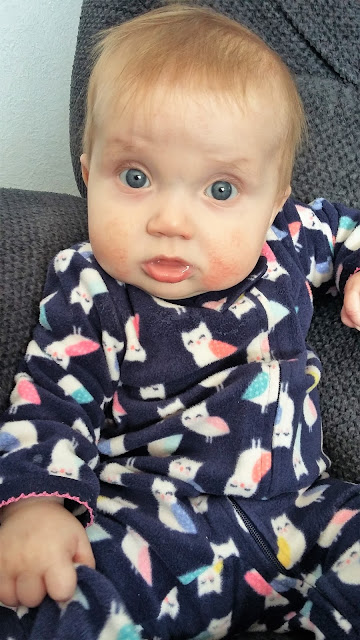 Our family feels perfect with Miriam and making her laugh is the best thing in the world. I'm so glad we have her. Thanks be to God for her.
- January 27, 2018

Email ThisBlogThis!Share to TwitterShare to FacebookShare to Pinterest
Labels: family, good to be Catholic, kiddos, motherhood