In What I Have Failed to Do

I was recently reminded of an awkward situation from fifteen years ago.

I was in college and involved at the Catholic student center at a local state university, as was a new friend of mine; we'll call her Susan.

Susan asked if I would pray with her during an upcoming holy hour and I eagerly agreed. She signed up both us but when the day came it ended up being a no good, horrible, terrible, very bad day. I called her and cancelled, telling her I just was not up for making the drive to her university and be around people.

It was true - I really was having a hard day and for a valid reason. And I really did not want to make the 25 minute drive and be at the Newman Center chapel where I knew I would run into all kinds of friends. She was disappointed but gracious and promised to pray for me.

A little bit later, at dinner on my campus, a couple of my good friends convinced me to go with them to that very same Newman Center chapel, insisting that wallowing and hiding from people was not what I needed. They promised to cheer me up and I let them drag me along.

They were right. It was good to be with them and to laugh. My heart needed it.

But as I stood outside the chapel, laughing and chatting, Susan heard me while she knelt - alone - inside. She was hurt. She felt I had lied, abandoned, and betrayed her. I tried to explain what had happened and sincerely apologized but it didn't matter. Our growing friendship never recovered.

Awhile ago something similar happened but this time I was in Susan's spot. I was hurt by the actions of a group of people - confused by why they did what they did. I felt betrayed, abandoned, and lied to.

I have prayed over the situation so many times and each time it seems that I have finally given it to God something happens and it starts all over again. I can see, God has shown me very clearly and with great tenderness, that what this group of people have done is very good. He is pleased with it and they have done nothing wrong.

So last week I asked Him, "If they have done nothing wrong then why does it hurt like they have?" And He made me think of Susan and He put on my heart the line from Penitential Rite, "I have sinned... in what I have failed to do."

What I did that day with the holy hour all those years ago - I did nothing wrong. My sins came in what I did not do. Susan was right to have felt slighted by me.

I keep thinking how things would have been so different if I would have just been 100% honest with her. "Hey. I'm going to come over tonight after all, but I don't think I can pray. It hurts to sit in the silence. I hope you will understand. I'm not trying to abandon you, in fact I hope you will pray for me while you're in there and I when you're done I want to hang out. I'm sorry to be this way right now but if you could support me in this I would be super grateful." She would have understood. She would have prayed for me. And on the other side of that holy hour we would have been better friends.

I know that there have been many times when I've done this. Afraid of any confrontation I ignore a situation, hide away what I'm doing, and pretend I'm not stepping on any toes while I'm marching down a line of them. But, mindful that God "did not give us a spirit of cowardice but rather of power and love" and that there "are different forms of service but the same Lord, ...different workings but the same God who produces all of them in everyone," it seems that what I  have done in the darkness should be brought to the light. I don't want to waste my time on mulling and stewing and plotting but I want to invest it on sharing and empowering and working together.

I had a boss once, Kurt is his name, and he was the best boss I've ever seen. He would unite people. He would listen to your bad idea, talk to you about his great one, merge the two together and in the end give you all the credit in a way that you really did believe it was all your doing. He wasn't afraid of awkward conversations because he knew it was better to talk about things so we could understand how everyone was working together to do what was best for the whole lot of us. He didn't see any of us as competitors but teammates and he expected us to support, promote, and encourage one another.

I want to be more like that - brave and honest and living my life in the Light so that the darkness shall not overcome. 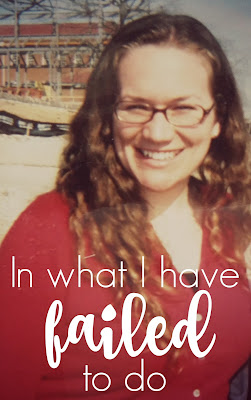 This is a picture of college-aged Bonnie, with her skinny face, curly hair, and fearful heart.