The Last Bits of Summer

The weeks before the kids go back to school are super stressful and overwhelming to me with the overload of errands, appointments, paperwork, and more. The house is constantly messy, the kids are bored of the slip n' slide, there's all kinds of fighting, and I am just so tired of feeding them. They want to go back to school and I want them to, too. How did people do it for thousands of years? How do homeschoolers do it?

To me this is not the end of summer. Summer basically ended on August 6th. I will get out my Fall decorations on September 1st -ish and this time in between is a purgatory of stress and heat and exhaustion. (As an aside, some people think I'm a bit dramatic but I just don't see it.)

I made a playlist to get me through these next weeks. You can see how badly I want to get on with my life in that I titled it "September 2018." Some of the songs are pretty new to me and so I cannot vouch for all the lyrics and content, but if you want to discover some new songs right along with me click over and check it out. There's some safe ones, too, like Ben Rector and Mat Kearney. ;)

School starts with a half day on Thursday, so here's a look the last bits of summer, the things that happened at the end of July and the first week of August. That is, the things that I want to remember.

Jofis celebrated his 5th birthday. He wanted a train cake and party and since his favorite color is green I was able to make all his dreams come true super simply. A few of his classmates and cousins came over, everyone played outside, and we ate wacky cake and drank lemonade. He got a bug catcher and water balloons and his life was made. 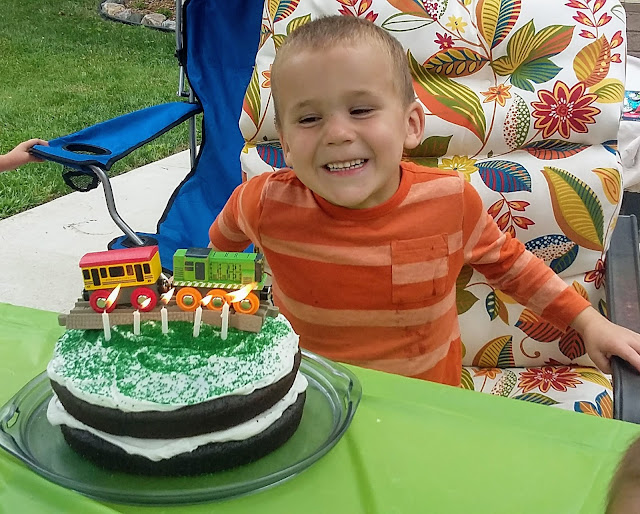 I celebrated my birthday, too. I turned thirty-seven and to celebrate I got coffee with friends, went shopping at Target with Travis, bought a new dress, asked people to donate to baby Olivia's GoFundMe, found a few new grey hairs, and overall had a good day. 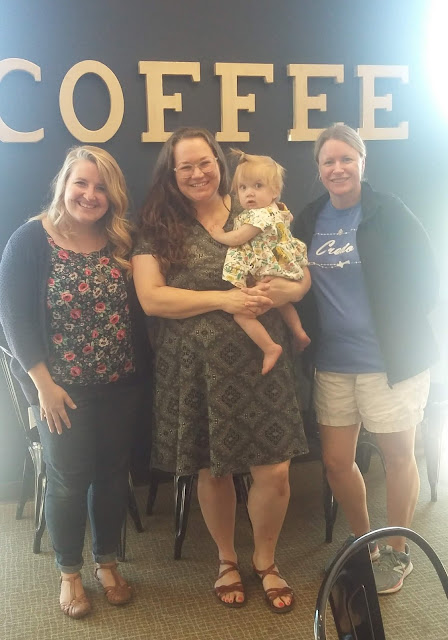 We also celebrated Harry Potter's birthday. The kids listened to several of the audio books this summer and L read the whole series for the first time. They have watched several of the movies, too, so it was a lot of fun to surprise them with a table filled with candles, pretzel rod wands, and this birthday cake. They snacked in the candlelight while watching the first movie before bed. And just so you know, there's a bit of a back story for this cake and you can hear about it if you watch the You're a Bad Mom video here. 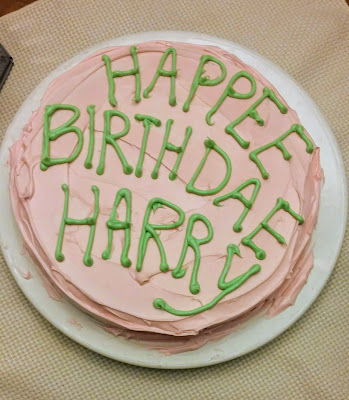 In other news, we were given a Days of Creation paper chain (which you can see here) along with a beautiful, giant floor puzzle from WeeBelievers. Both are super sweet but we especially love the floor puzzle because we are just floor puzzle people, people! I mean, look at how happy Tee is with it! The illustrations are so sweet, you guys. I really love it. But the best part is that it's two sided so it's two, two, TWO puzzles in one! 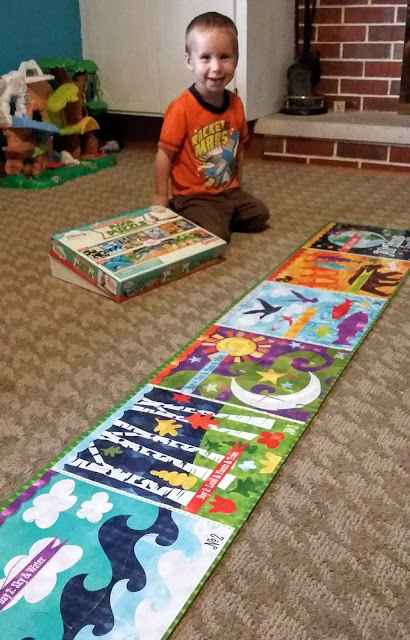 In other news, I caught this super sweet picture of Travis and Tee sleeping one morning a few weeks ago. I mean, be still my heart. 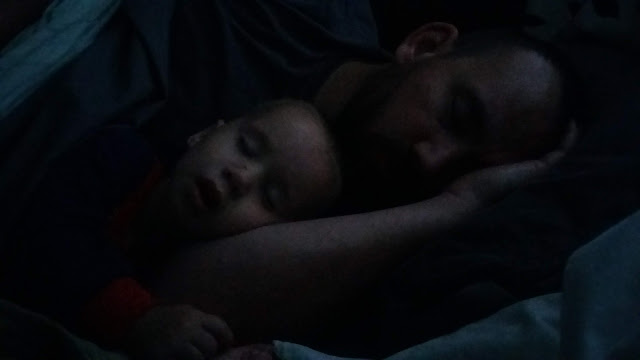 And now I'll tell you all a secret: this summer we attended 7am daily Mass Monday - Friday. The vast majority of the time the whole family went: Travis, me, and all seven kids. We missed a few days, and occasionally some of us had to stay home but usually we were all there.

Now this was even feasible because:
#1 - we did not have a newborn / someone recovering from major surgery (like last summer)
#2 - Travis is a teacher with summers off and this summer his handyman jobs were all local so he was almost always around to attend with us.

The reasons I wanted to do it are:
#1 - For years Travis and I were daily communicants and I was really missing that Gift.
#2 - I knew that if we attended 7am Mass all summer long our days would still end around 8pm which meant we could keep the same bedtime and evening routine. I knew I wanted to have time with Travis every night and I hoped that the return to the school would feel less like a crash and burn this way.
#3 - I'm hoping it will inspire my boys to love the priesthood and I pray that one of them has been given that vocation.

I don't know what will happen next summer but I know that being able to attend daily Mass this summer was such a gift to me. Even when my kids complained. Even when MJ would not be contained to the pew and had to wander. Even when we had to sit in the cry room because we were so late. It was such a gift. 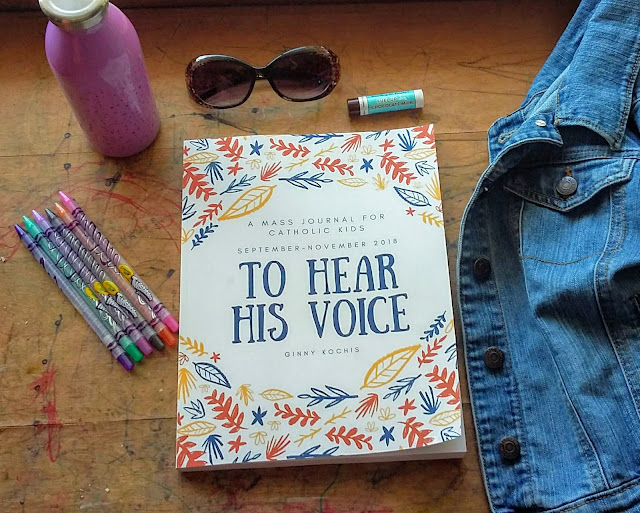 Speaking of Mass, this seems like a good time to show you the preview copy of Ginny Kochis's new Mass Journal for Kids. Ginny sent it to me and I promptly passed on to my 10 year old, L. It's really lovely, you guys, and if you're looking for something you can either gift to your own children, godchildren, students or use as a family to prepare for or review the Sunday Mass readings I really encourage you to try this. 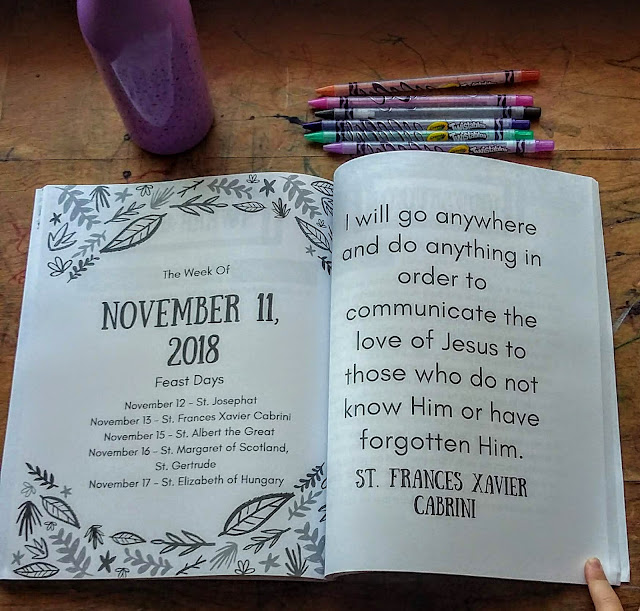 L and I were both really taken by the layout and feel of the book. It's big; has room for doodles, journaling, and note taking; and includes all the readings + reflections, quotes from the saints, and more. I also like that it goes by seasons - this one covers the Autumn months - so it's not too bulky nor too big of a commitment. If you're looking for a nice Back to School gift this would be a great one, I think.


One last note: the winners for the Sheenazing Awards have finally been announced! You can head to the original post to see who earned the top three spots in each category! Thank you to everyone who voted - over 1,100! - and congratulations to the winners! I hope everyone had fun along the way!

Email ThisBlogThis!Share to TwitterShare to FacebookShare to Pinterest
Labels: books, good to be Catholic, hubby, kiddos, me, music, summer