The Pelican and the Phoenix

St. Maximilian Kolbe loved Mary and her Immaculate Heart. He loved her passionately and spent much of his life leading people to love Mary so that she could lead them to her Son with a more perfect love.

On his feast day, August 14th, 2018 a the Penn grand jury report was released and since then more and more filth has come out. Around the country many people have learned that the men who married them, heard their confessions, gave them their first communions, and baptized their babies also molested and abused children and teenagers. The Bishop who confirmed me has been named as complicit in covering up McCarrick's scandal.

Over the weekend I learned that a former nuncio released a statement on the Feast of  the Queenship of Mary. This statement explains how Pope Benedict knew about McCarrick and took away many of his privileges but then Pope Francis knew and lifted the sanctions. Pope Francis has said he would not say a word about it and we need to draw our own conclusions. This is not acceptable to me. If the pope wants to have a relationship with me as my Holy Father then he needs to speak.

Friends, I am tempted to give up, to despair. Who do I trust and how do I trust them? I have written letters. I will write more, using Nell and Jenny's as inspiration, but will they do any good? I don't know. Men I thought were good were weak. I am hoping for transparency and confessions of sins; I am hoping that even the innocent will share all they can and a total purging will happen. Because how else will I ever trust again?


When I picture this situation in prayer I always have the image of a massive building burning down and that's what I want to do: burn it all down. Rip them all out. Stick them in prison with only sackcloth to wear and stones to sleep on. Give them bread and water and fill their days with hard labor and prayer.

And what is this thing that seems to be both collapsing around me and forever firm in its lies and perversion and evil? I have lived out the Church's teachings in ways that are sometimes very hard and I have spent much of my last ten years encouraging other women to live out their Catholic faith with joy and trust. And now I find myself wondering, "What for?"

A Reading from the Gospel according to John:

(The Gospel from August 19th, 2018; the Sunday after the Grand Jury report was published.)

I know that same sex attraction is not the cause for this and at the same time I know that gay men have used the priesthood to groom and prey on young men and that an active homosexual culture has flourished in seminaries and rectories. A lack of chastity combined with seminary directors + vocation directors + bishops lacking the intelligence + courage + personal holiness to kick out bad men is the problem.

I also know that celibacy is not the problem. If it were then anyone living a life of celibacy would be susceptible to this timeline that ends in perversion: nuns, consecrated virgins, single people waiting for the vocation of marriage, and married couples having to abstain for months or years in their practice of NFP. But from what I have read I don't think that is what's going on. Besides, I know of plenty of priests who fell in love with women and they rather simply left the priesthood and married.

In the end, I believe these priests when they say that chastity and priestly community are what is needed. It makes sense to me.

But still. There is so much that needs to change and I have no idea if I can do anything to change it.

A Reading from the Prophet Ezekiel:

The word of the Lord came to me:
Son of man, prophesy against the shepherds of Israel, in these words prophesy to them to the shepherds: Thus says the Lord GOD: Woe to the shepherds of Israel who have been pasturing themselves! Should not shepherds, rather, pasture sheep? You have fed off their milk, worn their wool, and slaughtered the fatlings, but the sheep you have not pastured. You did not strengthen the weak nor heal the sick nor bind up the injured. You did not bring back the strayed nor seek the lost,
but you lorded it over them harshly and brutally. So they were scattered for the lack of a shepherd,
and became food for all the wild beasts. ... Thus says the Lord GOD: I swear I am coming against these shepherds. I will claim my sheep from them and put a stop to their shepherding my sheep so that they may no longer pasture themselves. I will save my sheep, that they may no longer be food for their mouths. For thus says the Lord GOD: I myself will look after and tend my sheep.

(The First Reading on August 22nd, 2018 the Feast of the Queenship of Mary and the first day of #sackclothandashes.)

When I think on it all long enough the rage comes out and because I cannot yell at the people I am furious with I yell at my kids or am short with a friend. I am so angry about the horrible things people did to children and then I turn around and take it out on my kids.

Lord, have mercy on me.

My son wants to be a priest. He talks about celebrating Mass and practices with his Mass kit. I have prayed to God that He would give one of my sons a vocation to the priesthood. But now I just don't know if I want that for him, for any of them.

A Reading from the Book of Joshua:

When they stood in ranks before God, Joshua addressed all the people:
"If it does not please you to serve the LORD, decide today whom you will serve, the gods your fathers served beyond the River or the gods of the Amorites in whose country you are now dwelling.
As for me and my household, we will serve the LORD."

As much as I want to despair, I am also challenged by the words of Fr. Mike Schmitz to evaluate my own life and the ways that I am lax about sin and let things slide. At times this scandal is all crushing and every day since I have learned of it I have had to pick myself up and remind myself that crumbling into useless despair does not serve the Kingdom of God. In the end I want to be a saint so perhaps this is my time.

I will be honest, it scares me and I have tried to hide from it.

A Reading from the Gospel according to John:

As a result of this, many of his disciples returned to their former way of life and no longer accompanied him. Jesus then said to the Twelve, "Do you also want to leave?" Simon Peter answered him, "Master, to whom shall we go? You have the words of eternal life. We have come to believe
and are convinced that you are the Holy One of God."

But I think that God is speaking to me, to us. Look at these readings. Look at the way that Mary has been with us from the beginning and plans to walk with us through it all. God is asking me, "Who will you serve and will you go?" and He's using the Mass, the feast days of the Church, the saints, and Scripture to very clearly communicate to us. He is using this broken Church to communicate with us which only seems to confirm that it is His and He is guiding it.

The #sackclothandashes period of prayer and fasting continues through the end of September, the month dedicated to Our Lady of Sorrows.  Mother Mary, help me to pray and love and not give up. Jesus, truly present in the Blessed Sacrament, sustain me through this. Holy Spirit, guide me.

May the Sacred Heart of Jesus and the Immaculate Heart of Mary triumph in the end! And perhaps future altars will feature the Pelican and the Phoenix. 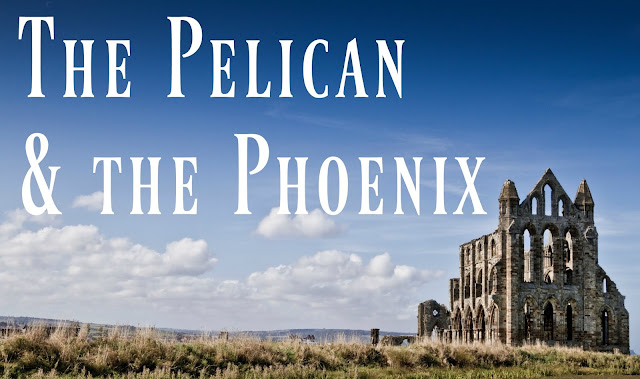