I'm that mom you dislike so much, sitting in the front pew with my unruly kids

"There is something in Catholic Church culture that insists kids belong in the sanctuary for Mass. I must say I don’t totally understand it, but it is definitely a Catholic thing. Part of the thinking is that sheer exposure to the service imbues them with grace and other good things in some kind of effortless and mindless sort of way. But if they can’t understand the readings and they cannot take Communion, it is unclear what they are 'receiving' Sacramentally."

Today, our entire parochial school (pre-k4 - 8) braved the single digit temperature and headed over to the our church. They do this every Friday - rain, snow, blazing hot, or perfect weather - for the all school Mass. Parents and grandparents attend too, as do other parishioners, homeschooling families, and all the faculty.

Each week a different grade from Kindergarten on up fills the various rolls. They hold open the doors and shake the hands of their classmates. They serve at the altar if old enough. They lector and cantor. They bring up the gifts and sing in the choir.

The older kids sit with the pre-schoolers and kindergartners, showing them how to genuflect, pointing out the words of the songs, and helping them through the Mass.

It takes a great deal of effort and mindfulness on the parts of the parents and teachers to prepare the students for Mass. The children know and understand that when in the Church and at Mass they are with Almighty God, their Lord and Savior Jesus Christ, who loves them tremendously. Surely to be in the presence of God, to hear His Word, to be part of the Church, to be welcomed in and actively serving at Mass means they are receiving something, even if it's not a Sacrament.

"Another argument suggests that kids need to 'learn the Mass' and that can only happen through physical attendance. I liken it to bringing a toddler to a lecture or presentation intended for adults, because there is information you want your kids to have. Nobody would ever do that, because it obviously wouldn’t work. They must be introduced to the information in age appropriate ways if they are to learn. Everybody knows this, and yet we ignore it in church."

We whisper explanations to our children at Mass. We help them make the sign of the cross over their forehead, lips, and heart. We explain how and why to genuflect. We point out the Eucharist and whisper praises to Jesus into our children's ears so they will learn to praise Him too. Sometimes my sons will mimic Father, noticing how he moves and holds his hands. I've seen them whisper the prayers under their breath, taking in every detail.

I suppose we could do this by watching the Mass on television, but I have found that being there is so important. We read from a children's Bible at home and talk about our prayers, gestures, and faith. What they see and do at Mass builds on the foundation that has been started at home and at home we then build upon what they have seen and done at Mass. For example, at home they play with their Mass kits, donning dress-up vestments, swinging a stuffed inscensor, and reciting many of the prayers from memory. My sons even preach homilies about how much Jesus loves us.

It is nothing like taking children to an adult-only lecture. It is using everything we have as the primary educators of our children to do our most important job: teach them to know and love God and to understand their faith.

"To this end, I will sometimes see a Mom sitting in the very front row with her child. The front row so the kids can 'see the altar' (as if they’re looking ). Then, a tormented exercise is undertaken in which the kid, who can be distracted with Cheerios for only so long, becomes disruptive.

Which becomes a distraction for everyone, including liturgical ministers and the homilist. I cannot begin to tell you how incredibly difficult it is to try and preach over a crying baby.

In this exercise the parents are fighting a losing battle, and sometimes suffer the unkind, but understandably disapproving glances of the congregation."

On Sundays we are one of those families who sits in the front row so our kids can see what's going on. Our children request it. We also sat in the front when we attended daily Mass almost every day last summer. Sometimes one of us will have to leave with an unruly child. Sometimes all the kids have to pee at once. Sometimes, but very rarely, we have gotten a disapproving glance. But mostly we have people tell us what a beautiful family we have. We've had strangers stop us to thank us for bringing our kids to Mass (and adoration). We've had countless adults tell us about their families of origin, or their kids, or their grandkids and what a joy it is for them to see us. And when we've apologized to our priests for unruly kids our pastors have always told us not to worry, that they don't mind, that they love having kids at Mass.

I don't understand a pastor who would publicly mock a mother for trying to involve her child in Mass instead of correcting his other parishioners for being unkind. I do know how hard it is to speak publicly when babies are crying (or cell phones go off, or people don't pay attention, etc) because all of that has happened to me as a public speaker. But I also know how hard it is to raise kids who want to go to Mass and I would be happy to explain that to any priest who can't even begin to imagine.


"This Sunday brings one of my favorite readings from one of my favorite books of the Bible... 'Ezra the priest brought the law before the assembly,which consisted of men, women and those children old enough to understand.' Nehemiah 8 ... Notice that it says, “men women and children old enough to understand.” The little children and toddlers were not included because they couldn’t understand a long service intended for adults."

Last summer, my in-going 3rd grade son was praying at daily Mass and he saw Jesus approach him, shake his hand, and "chit-chat" with him "for a little bit." Perhaps he would have had this same experience if he were weekly taken out of Sunday Mass for fun! age appropriate! well developed! children's programming, as they do at Church of the Nativity. I am sure that those children's programs are real blessings for a lot of families and they are working in the lives of those kids.

But I cannot discredit what being quiet, still, and attentive at Mass has done for him or my other children or our family as a whole. I know that every child, every family, and every season of life is different. And I know that the quoted passages above are meant for a specific audience - the priest's parishioners, who should have an understanding of the standards and practices of their particular parish. I just wish the pastor of Church of the Nativity could find a way to understand that Mass can be a beautiful thing for people of all ages (it feels ridiculous that I even have to type that). I wish he would have been more careful when crafting his letter, staying away from perpetuating any thinking that belittles the beliefs, intentions, and practices of so many Catholic moms and dads who are very sincerely trying to do their best.

And I wish that instead of loving an Old Testament verse that favors restricting children from the proclamation of the Sacred Scripture, this pastor had instead written from the perspective of Christ. "Let the little children come to me and do not hinder them." Mathew 19:14 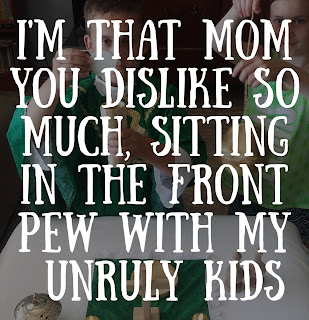 Email ThisBlogThis!Share to TwitterShare to FacebookShare to Pinterest
Labels: motherhood