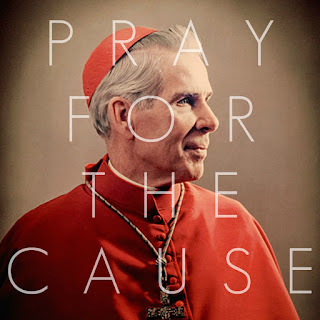 It is my hope and prayer that Venerable Archbishop Fulton J. Sheen will be beatified and canonized very soon! I strongly feel that our culture needs a saint like Sheen - a man who loved Christ and His Church and who engaged the most modern forms of media to evangelize the world. Archbishop Sheen, through his writing, speaking, and radio and television shows, spread the Good News of our Lord and our faith to millions of people. He fought communism and converted many to the Catholic Faith. He had a strong devotion to the Eucharist, loved our Blessed Mother Mary, and found great joy in being a priest.  However, my strong devotion to Fulton Sheen is rooted in a much more personal reason.

The (alleged) Miracle
On September 16, 2010 my son, James Fulton, was delivered at home, a stillborn. CPR was administered, 911 was called, James was transported to a hospital, and after 61 minutes of being without a pulse - just as the doctors were prepared to call time of death - my son came back to life. The doctors believed there would be massive organ damage from the lack of oxygen which meant James would die very soon. When he didn't die they believed he would be a "vegetable" and when it was clear that he wouldn't be dependent on machines they warned us that he would be severely disabled.

From the very beginning and throughout it all my husband, family, friends, and I asked for a miraculous full restoration through the intercession of Archbishop Fulton J. Sheen, for whom we had named our son. Over the months it became increasingly clear to us that God had answered our prayers and those of Fulton Sheen. Believing that God had worked a miracle on our son we contacted the Sheen Foundation who then opened an investigative tribunal into the alleged miracle.

It has been eight years since James was born. Today he is in second grade - a normal little boy who loves french fries, Star Wars, fishing, and riding his bike.


Timeline of Bishop Sheen's Cause, as relating to James
On September 14, 2002 the Congregation for the Causes of Saints officially opens Fulton Sheen's cause and gives him the title "Servant of God." The Diocese of Peoria, Illinois is the promoter of the cause.

On December 11, 2011 the three month long tribunal investigating James' alleged miracle is officially closed in a ceremony at the Cathedral in Peoria, Illinois.

On June 28, 2012 Pope Benedict XVI declared Fulton Sheen "Venerable". The next day the Sheen Foundation stated that they would be submitting James' story as the official alleged miracle for the beatification of Venerable Fulton Sheen.

In March 2014 the medical experts who advise the Congregation for the Causes of Saints approved James' miracle.

In June 2014 the theologians who advise the Congregation for the Causes of Saints approved James' miracle.

For more information on the "Pause in the Cause" read the following links:
Fulton Sheen's Cause for Canonization Stopped Because of Archdiocese of New York from Sept 2014
Press Release with Clarifications from Catholic Diocese of Peoria from Sept 2014
James' 4th Birthday and How It Relates to Sheen's Cause from Sept 2014
Sheen's Family Petitions New York Court to Move Sheen to Peoria from June 2016
A Court Victory for Sheen Family, NY's Appeal, and the Bottom Line from Nov 2016 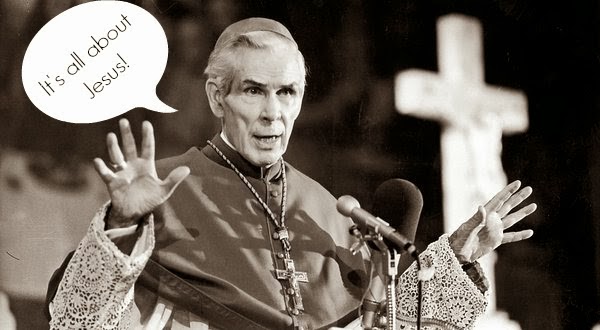 Get amazing, free lessons and crafts to teach your kids about Venerable Sheen at Look to Him and Be Radiant.

You can read more about James through these links:
From my blog:
James Fulton
God set the table
this thing that I fear
the long awaited MRI results are in
my thoughts on the alleged miracle

A collection of all the press done from the announcement that the medical board who advises the Congregation for the Causes of Saints had approved James' alleged miracle:

Prayer for the Canonization of Venerable Fulton J. Sheen
Heavenly Father, source of all holiness, You raise up within the Church in every age men and women who serve with heroic love and dedication. You have blessed Your Church through the life and ministry of Your faithful servant, Archbishop Fulton J. Sheen. He has written and spoken well of Your Divine Son, Jesus Christ, and was a true instrument of the Holy Spirit in touching the hearts of countless people. If it be according to your Will, for the honor and glory of the Most Holy Trinity and for the salvation of souls, we ask You to move the Church to proclaim him a saint. We ask this prayer through Jesus Christ, our Lord. Amen

Prayer for James' Miraculous Healing through the Intercession of Archbishop Fulton J. Sheen
Eternal Father, You alone grant us every blessing in Heaven and on earth, through the redemptive mission of Your Divine Son, Jesus Christ, and by the working of the Holy Spirit. If it be according to Your Will, glorify Your servant, Fulton J. Sheen, by granting the favor I now request through his prayerful intercession - that James Fulton's body heals and functions normally and that he is spared any brain damage. I make this prayer confidently through Jesus Christ, our Lord. Amen.