The last week of school before Christmas break Ben came down with something. He slept 20 hours a day and barely ate anything. One by one all six of my kids fell ill and when Baby Tee was also sick I took him to the doctor. Strep throat for the baby and so everyone got antibiotics. By the time the kids were starting to feel better my throat was starting to hurt, I had a congested headache and a cough.

And for over four weeks I would cough and sleep and lay around. I would start to feel better and then crash with more coughing, sleeping, and laying around. Often I would wish that *I* was at Netherfield with a household staff to cook, clean, and care for the children while I laid in bed and got better. (Alright, honestly, I often have that wish even when I'm healthy.)

It wasn't strep; it wasn't bronchitis; and while I thought it had turned into walking pneumonia and was even treated for it with some antibiotics I think, in the end, it was just a super duper, really bad cold - just like the prompt care doctor told me. Five weeks later I am still occasionally coughing but I finally feel fairly caught up with life.

There were a lot of really good things that happened in those five weeks, especially in December, and I wanted to share some of the highlights.

St. Nick brought a gingerbread village for the kids to assemble and decorate. 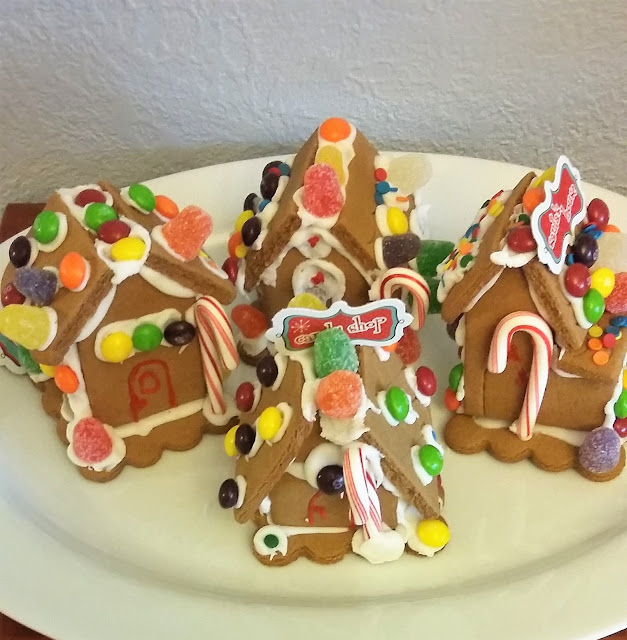 Travis was able to finish and hang my shelves. They are made from the wood of an oak tree that stood in my maternal grandfather's yard. We kept the bark on them and glossed them up. This is pretty much the first and only time where how I imagined a finished project looking is how the finished project actually looks. And I loooooove it! 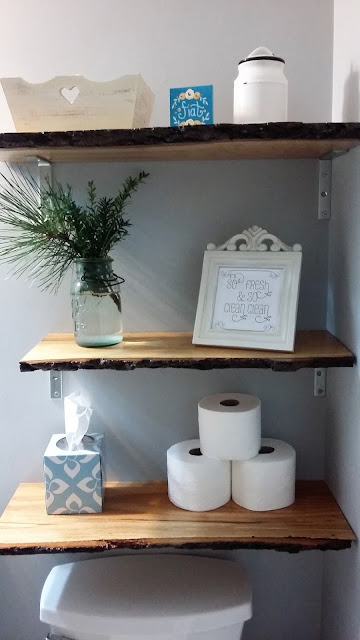 The little Fiat sign is from JustLovePrints.
So Fresh & So Clean Clean print from Brick House in the City.


On Christmas morning we put on our finest, went to the 7am Mass, and tried to get a good family photo. This is as good as it gets, and yes, there is a hideous mural on the back wall of my parish. I dream of whitewashing it. 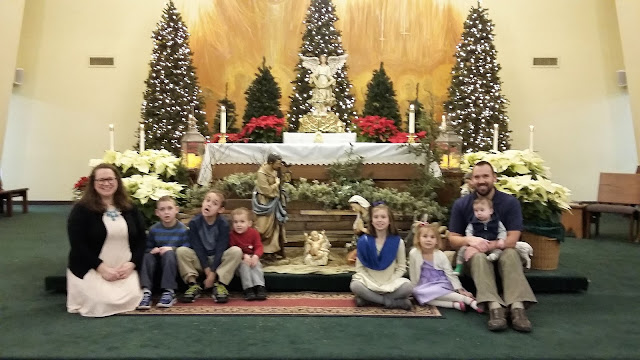 My parents, my uncle, and my paternal grandfather came over to watch the kids open their gifts and to eat homemade sausage bread and cinnamon rolls, bacon, and coffee. Behold: the only picture I took: 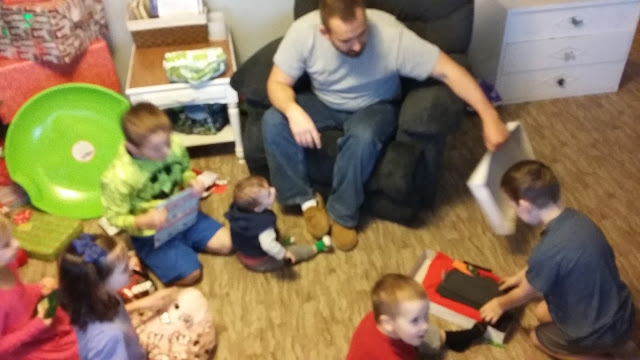 Five days later we celebrated Baby Tee's first birthday and our tenth anniversary with a party. Our parents, siblings, and friends were invited and so I set out a yummy spread, decorated with fresh greens and items used in our wedding reception, and... 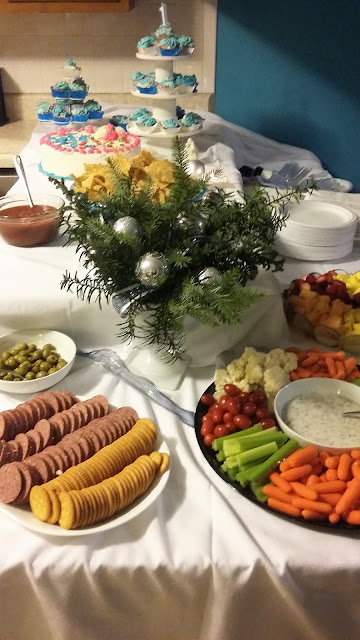 put on my new favorite outfit and (a rare thing these days) make-up. 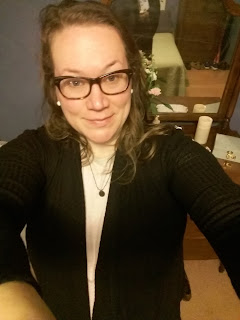 L, my 8 year old, was pursuing her Cake Making badge in American Heritage Girls and so she spent the day with her aunt, a professional baker, and designed and baked the anniversary cake for us... 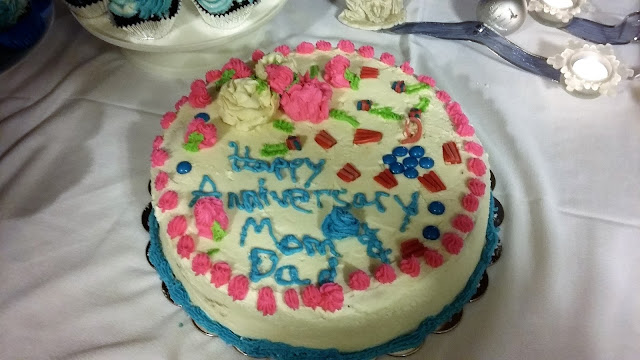 And the birthday cupcakes for Tee. 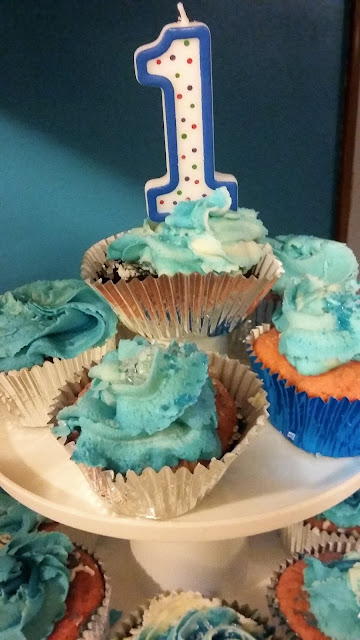 We were married on my paternal grandfather's 80th birthday so along with Tee's 1st, we celebrated Grandpa's 90th. L made him a special cupcake and everyone sang Happy Birthday to him. 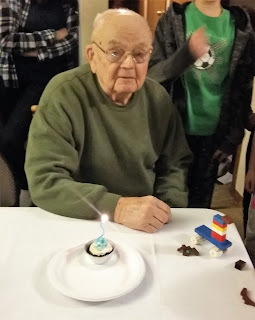 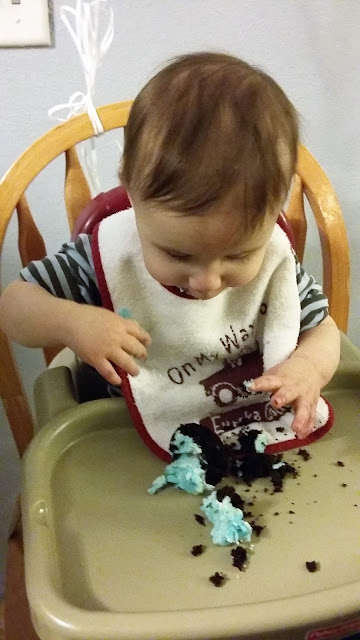 Fortunately I was feeling fairly well for Christmas and our anniversary but right after each I crashed again. Instead of doing an Advent Calendar I like to celebrate the Twelve Days of Christmas but this year the only thing I was able to do was make and decorate Christmas cookies and that was only because my mom came over to help. Oh well. 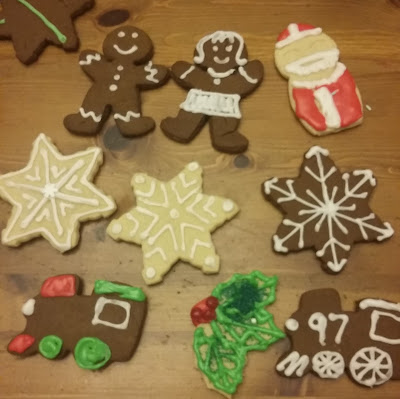 If you're looking for a good gingerbread cookie recipe Mary's from Better Than Eden is the best I've ever had. Follow her tip and save them for the next day. I don't know why, but they are so much better Day Two. And that St. Nick cookie cutter came from Catholic Curio, in case you were wondering.


And if you're looking for a good something to watch, well I have been busy with all my laying around.

Amazon Prime: Mr. Holmes, the BBC's Emma, Grantchester, Endevour, and the Matt Smith Doctor Who episodes all kept me company.

Netflix: Spotlight, Sherlock, The Crown, A Royal Night Out, Death Comes to Pemberly, Madame Secretary, The Imitation Game, The Returned, and E.T. have also been good distractions.

I'll leave you with my current favorite song, a reward of sorts for making to the end of this post.